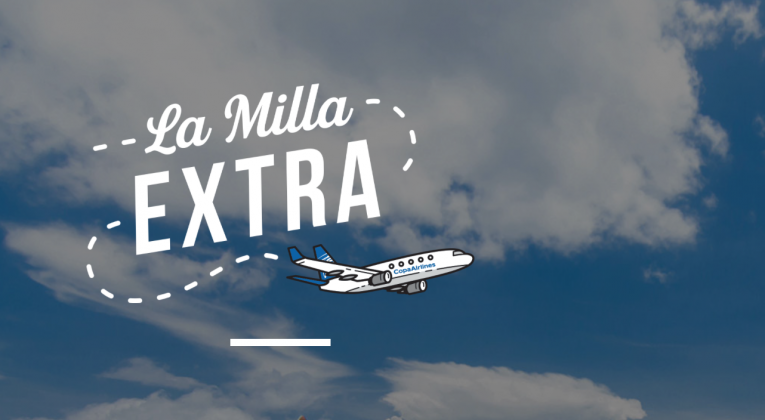 Register to participate in The Extra Mile promotion by Tuesday, November 15, 2016 at 11:59 in the evening Central Standard Time and you will have your chance to win a trip for two to any destination served by Copa Airlines and Copa Airlines Colombia — but you must be a member of the ConnectMiles frequent flier loyalty program who is of legal age according to the laws of your country of origin in order to participate.

How to Participate in this Promotion

No purchase is necessary in order to enter this promotion as a participant.

Once you have registered for the promotion, you will receive one chance to enter to win — but you may also earn additional chances to enter to win by completing any or all of the activities listed below by Tuesday, November 15, 2016:

The prize for each of the three winners of The Extra Mile promotion trip for two people to any destination served by Copa Airlines and Copa Airlines Colombia includes the following, with all monetary amounts listed in United States dollars:

The winners and their travel companions may use the prize between Thursday, December 8, 2016 and Friday, December 8, 2017; and they will travel via Panama on Copa Airlines or Copa Airlines Colombia. Each winner and his or her travel companion must start and finish their trip on the same dates — in other words, they must travel together at all times.

The prize may not be used on the following departure dates or arrival dates:

The winners must submit at least three travel date options in order to ensure flight availability.

The prizes do not include:

This promotion is valid in the following countries and territories served by Copa Airlines:

If the place of residence of the winners or their travel companions is not a city served by Copa Airlines in one of the participating countries, the winners and their travel companions must travel by their own means to the closest city served by Copa Airlines; and subsequently must return by their own means to their place of residence.

You must provide all identifying information requested during the registration process — including your:

The airplane tickets included in each prize:

Copa Airlines will not be responsible for any expenses incurred by the winners and their travel companions at their destination — except those expenses included in the prize description in this document.

Copa Airlines will hold one drawing, which will occur at 9:30 in the morning Central Standard Time on Wednesday, December 7, 2016. Each winner will be contacted by Copa Airlines via telephone and then via e-mail message that he or she has won a prize and to coordinate with them the delivery.

In the event that any of the three winners fails to claim and accept his or her prize within fifteen business days after the prize drawing is held, a cash sum equivalent to the value of said unclaimed prize will be donated to a charitable, social assistance, or benevolent organization in the Republic of Panama.

The winners and their travel companions are solely responsible for:

If any travel companion is a minor and is not traveling with either of his or her parents, a parent having legal custody or the legal guardian of the minor must provide:

The winners will be directly responsible for any consequences resulting from failure to fulfill the requirements referred to in this point.

Other official rules — as well as restrictions, terms and conditions — apply, which include but are not limited to those dealing with the topics of:

Be sure that you read all of them carefully and agree with them before participating in the sweepstakes.

This is another of a series of interesting promotion since the Copa Airlines ConnectMiles frequent flier loyalty program was established last year — such as this recent double ConnectMiles promotion as reported by Mike Friedman last month.

If you are willing to go the extra mile with the restrictions, terms and conditions of this promotion — as well as participate in all of the different ways to enter — then attempting to be one of the three winners of the prize being offered for a trip for two may be worth the time and effort on your part.