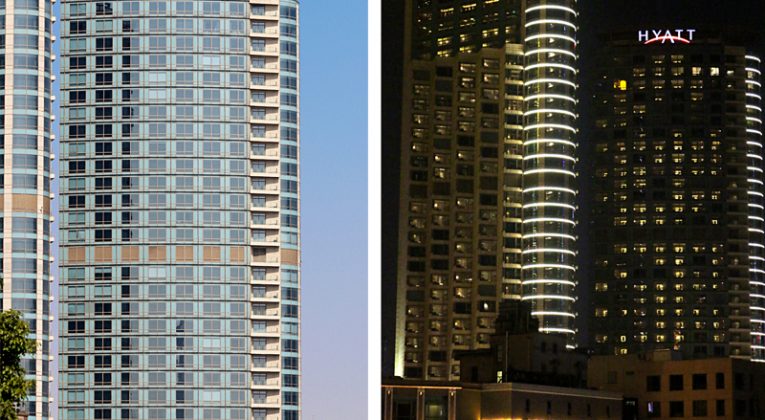 Due to my flight from Shanghai to Manila being cancelled for that evening and not being able to travel until 24 hours later — I received no notice about the cancellation and only found out when I arrived at the airport in Seoul earlier that morning — I booked a reservation at the last minute at Hyatt on the Bund, as it was the hotel with the lowest room rate of all of the major lodging brands in my limited time to search.

Hyatt on the Bund is located at the northern end of the Bund near the bank of the Huang Pu River that divides Shanghai, which is the largest city in the world in terms of population, with almost 25 million people in its city proper.

The walk from the subway station was approximately 20 minutes from the East Nanjing Road station on the 2 Line, whose eastern terminus is at Shanghai Pudong International Airport. Due in part to streets crowded with people and in part to distance, this can be a problem if you are carrying a lot of luggage; but then, so would be traveling on the Shanghai Metro itself. The hotel is located closer to the International Passenger Transport Station on the 12 Line; but then you would have to deal with a transfer if you were arriving from the airport — and the walk will still be approximately 15 minutes.

Checking in to the hotel in its expansive lobby was no problem; and I was happy to get to my room after the day I had.

I explored the Bund both during the day and at night; as well as wandered a few blocks away from the Bund for some minimal shopping. The location of the hotel ensures that access to the Bund is easily within walking distance.

You can get a nice clear view of the hotel from the Bund.

The king room was spacious, as it was larger than a typical hotel room; but overall it was nothing extraordinary. Although the bed was not the best one in which I have ever slept, it was comfortable.

When the sliding doors near the bed are opened, the bathroom is revealed and becomes somewhat integrated with the rest of the room, separated only by an island with a countertop. Two bottles of water awaited me on that countertop.

There was a desk near the flat screen television which was built into the wall. I was able to work on that desk.

At first glance, the room looks nice enough; but a closer look reveals shoddy workmanship — not enough to adversely affect the stay — throughout the room, as revealed with three examples in the photographs below.

The closet had ample storage space as well; and was equipped with such items as an iron, an ironing board, and a robe.

The bathroom itself was adequate but not very spacious — even when the sliding doors were opened. The toilet and bathtub were in their own green frosted glass stalls within the bathroom. Bizarrely, you could use the toilet and have a distant view of the Bund when the sliding doors were opened — but if you are going to do this, I would advise doing so if you are the only person occupying the room.

In addition to the amenities by June Jacobs — green tea and cucumber shampoo, conditioner, shower gel and soap — there was also a box which revealed more amenities packed in boxes when its lid was opened, which included such items as toothpaste, a toothbrush, a razor, and shaving cream.

There were also plenty of towels available in the bathroom, which was nice and clean overall — as was the rest of the room.

The view from the hotel room was the highlight of what was an otherwise ordinary stay. Stretching from the tall buildings of Pudong on the left; across the Huang Pu River and the Bund straight ahead — including a clear view of the Shanghai People Yingxiong Memorial — I was able to watch the activity day and night from the comfort of my room after being outside and experiencing it for myself.

Near the window are ottomans on which you can sit and watch the view for hours. Witnessing the parade of assorted vessels navigating the river was potentially mesmerizing.

I did not see what time it happened; but most of the bright lights of the Bund dimmed after a certain hour. A comparison of before and after is shown amongst the photographs below.

The nice part of the view is that I can see from the room where I would like to wander or visit whenever I decided to venture outside.

I did not dine at the hotel; so I cannot give a review of the food. I also had no access to the Bund club rooms and lounge.

When I checked out of the hotel property, I was asked to sign a receipt — along with a choice of whether I would prefer to pay in yuan renminbi or dollars. I chose yuan renminbi, as paying in dollars would activate dynamic currency conversion, meaning that I would have paid more than I should. If you are ever offered a price in your home currency for your “convenience”, don’t do it — stick with paying in the local currency. Checking out of the hotel was effortless; and the members of the staff were pleasant and somewhat helpful overall. For example, one employee — after attempting to convince me to exchange currency at the front desk, to which I politely declined — recommended a bank nearby where I can get some yuan renminbi. The currency exchange process at that bank took approximately one hour due to several people ahead of me as well as slow service; and I would not recommend it.

I did not patronize any of the spa or fitness facilities; so I cannot comment on them.

Considering that I paid a room rate of 1,320.00 yuan renminbi plus a service charge of 15 percent — or approximately $210.00 total — for the night reserved at the last minute for a spacious room on a high floor with a great view in a hotel within walking distance of the Bund, I suppose that room rate was a decent value. I recommend staying at this hotel property.

Great view of both the Bund and Pudong areas; as well as the Huang Pu River itself
Convenient to the Bund
Plenty of amenities supplied
Plenty of shopping nearby

Shoddy workmanship in the room
Nearest subway station at least 15 minutes away walking; more if heading to or from the airport

If not for the view from the room, the stay itself would have been good but rather ordinary and unexceptional. I recommend this hotel property; but if you can get an even better value elsewhere, consider it.