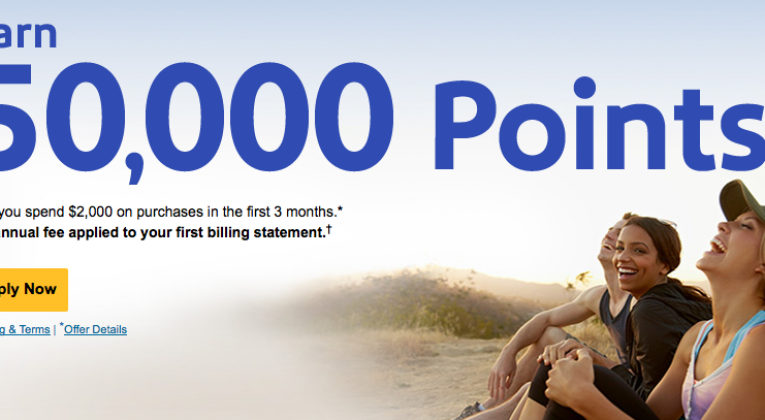 It’s back. A few times each year, Chase inflates the normal 25,000 point sign-up bonus for the Southwest Airlines Rapid Rewards credit card to 50,000 points, and now is one of those times. Simply spend $2,000 in the first three months and the points are yours. It comes with a $99 annual fee, although you also receive 6,000 points each year on your renewal anniversary.

Like most other airlines, Southwest awards you loyalty points, called “Rapid Rewards” points, based on how many dollars you spend. The number of points you earn is based on how much you spend and the category of ticket that you buy. Unlike other airlines (for now, anyway), though, redemptions are based on the price of the ticket, not an award chart that assigns the cost of an award based on geography. In other words, a $150 ticket should cost about three times as many points as a $50 ticket would. The value of points ranges from about 1.1 cents to almost two cents each, with the “Business Select” fares offering the least value per point and the “Wanna Get Away” fares offering the most.

On the surface, the card looks okay, not great. It certainly has a generous sign-up bonus, since 50,000 points are worth anywhere from $500-1,000 in Southwest flights. There is a $99 annual fee, although the 6,000 anniversary points that you get each year should offset that fee for the most part. And the two points per dollar spent on Southwest (a point per dollar everywhere else) is only a fair return. But there is one feature that makes this card invaluable for any Southwest frequent flyer…

Earn 110,000 qualifying in a calendar year and you will receive the Southwest Companion Pass (CP) for the remainder of that year and all of the following year. The pass allows you to bring a companion of your choice for free (although you still pay taxes and fees) along with you. You need to choose your companion at the beginning of the year, although you can change it three times each year. The CP is one of the most powerful elite status tools that I know of.

What makes the Companion Pass so appealing, however, is how easy it is to earn when you get the Rapid Reward credit card. Points earned on the card count toward your Companion Pass requirement! So when you get your card and spend your $2,000, you’ll have 52,000 points, almost half of what you need to get the pass. It gets better: If you get a business card in addition to the personal one, you’ll reach 104,000 qualifying points, leaving you only 6,000 points to earn through flights, credit card spend or base points from partners (partner bonus points and points transferred in do not count toward the CP).

This is one of those credit cards that I wouldn’t recommend for anyone other than those who spend a lot of time on Southwest metal. But if you do, it can be a very valuable tool when you are traveling with somebody else. Wanna get a card? Head over to Southwest’s web site.