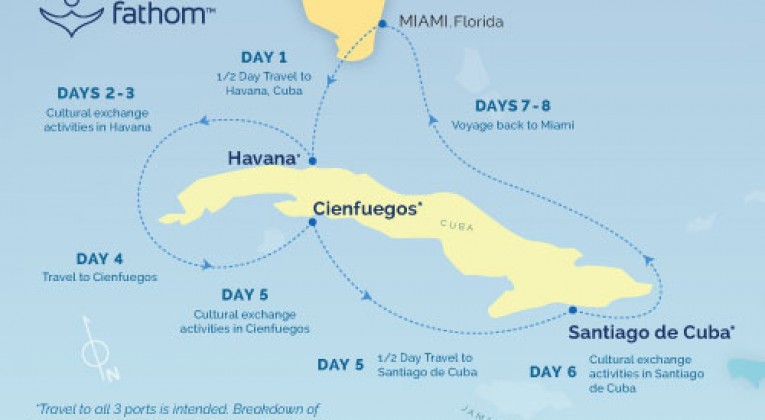 Carnival Corporation announced today that it will sail as planned from the United States to Cuba with all travelers, including those who were born in Cuba. Carnival’s first cruises to the island will be with its new Fathom brand aboard the 704 guest Adonia. The company’s first voyage to Cuba sets sail on May 1, 2016.

Anticipating a successful conclusion to negotiations with the Cuban government, Fathom started accepting bookings to Cuba from all travelers, including individuals born in Cuba last week. Adonis will begin sailing to Cuba every other week. This will be the first time in over 50 years that cruises from the U.S. to Cuba have been allowed and will be the first time in many years that Cuban-born guests will be able to sail to and from the island.

Fathom’s unique impact travel brand is ideal for entry into the Cuban market.  The community development and social impact projects that Fathom and its guests are dedicated to dovetail nicely with the 12 categories of authorized travel to Cuba that will now be granted general licenses under the relaxed rules announced in January.

Itinerary and Onboard Experience

During each cruise, Adonia will sail to Havana, Cienfuegos and Santiago de Cuba.

Carnival and Fathom have developed a respectable program of activities for their first cruises to Cuba. According to the company, onboard guests can “choose to partake in onboard experiences, including Cuban- and Caribbean-inspired food and films, music and dancing, and much more.” Fathom will also offer an orientation on Cuban history, customs, and culture to conversational Spanish instruction.

The Adonia will offer all the amenities one expects on a cruise including spa facilities, a games deck, a pool, and a fitness center that features a wide selection of exercise equipment, and of course, food – an important component of any cruise.

Fathom’s 7-day itineraries set sail from Miami on Sundays at 4:30 p.m., and arrive Havanna the following morning at 11a.m. Prices start at $1,800 per person, and vary by season. Book with your travel professional or at fathom.org.