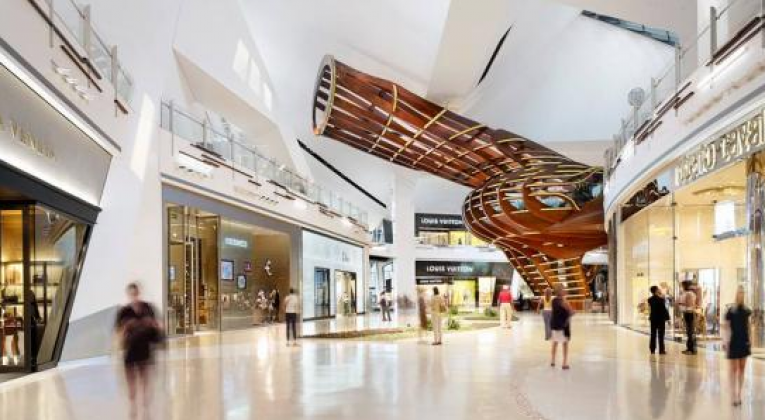 Don’t call it a mall. The Shops at Crystals, a luxury shopping center at the heart of MGM’s CityCenter, is being sold to Simon Property Group, a global investor in high-end malls and outlets. Featuring a range of stores from Audemars Piguet to Zegna, the shopping center has been sold for a reported $1.1 billion. But even if you ignore the shops, the building itself is reason enough to consider shelling out that kind of money. Designed by Daniel Libeskind and LEED certified, the 300,000+ square foot mecca is next to several CityCenter hotels and connected to other neighbors by a tram. The Shops at Crystals is a joint venture between MGM Resorts International and Dubai World.

CityCenter is a mixed-use property that was supposed to revolutionize Las Vegas. Begun in 2006, the project was a massive bet on the value of real estate on the south end of the Las Vegas Strip. It would have hotels, convention space, condominiums and the newest money-making venture, the condo-hotel. The condo-hotel concept seemed simple enough: Individual investors could buy condos and, when they weren’t using the space, MGM would rent them out as hotel rooms on the owner’s behalf, taking a cut of the price as a commission. Thus, the parent would get income both on the sale of the property and its use as a hotel space.

From White Tigers to White-Hot Real Estate to White Elephants…

MGM’s timing could not have been worse. The bubble in the real estate market was about to burst, just as supply in the condo-hotel market was peaking. The Signature Towers had just opened, while other companies, including Planet Hollywood and the W Hotels chain, were planning their own condo-hotel projects. The CityCenter project was a disaster from day one, with construction deaths, work slowdowns and the inevitable delays. Most embarrasing, one entire tower, the Harmon Hotel, had to be demolished because of construction defects. By the time CityCenter was finished in 2009, the $4 billion budget had more than doubled, while Las Vegas was still at the depths of the recession. Condo buyers turned into condo speculators and, rather than take delivery of a property whose value had fallen by one-third, they simply surrendered their deposits. MGM’s stock price, which had peaked at over $90 in October, 2007, dipped to about $2 in just over 18 months. With help from a Dubai World partnership and an economic recovery, the company avoided Chapter 11, but just barely.

The Shops at Crystals

Part of the “Crystals District,” the 50+ shops are the most luxurious of the high-end retailers (excluding, of course, the requisite Starbucks which can be found there). Want a Hermes tie to go along with your Jimmy Choo shoes and Gucci handbag? No problem. Any of those items can be found at the shops. The initial intent was for the stores to attract CityCenter residents and Las Vegas high-rollers, with the assumption that international visitors would be more than enough to offset any weakness that might be seen from the domestic economy. Of course, that plan did not work out particularly well, although The Shops eventually turned a profit. Truthfully, I’m not entirely certain that MGM ever intended to hold onto the property, although they clearly didn’t foresee the path to sale working out the way it did. But with over $10 billion in net debt on its balance sheet, I think we have a pretty good idea of what MGM is going to do with the proceeds.