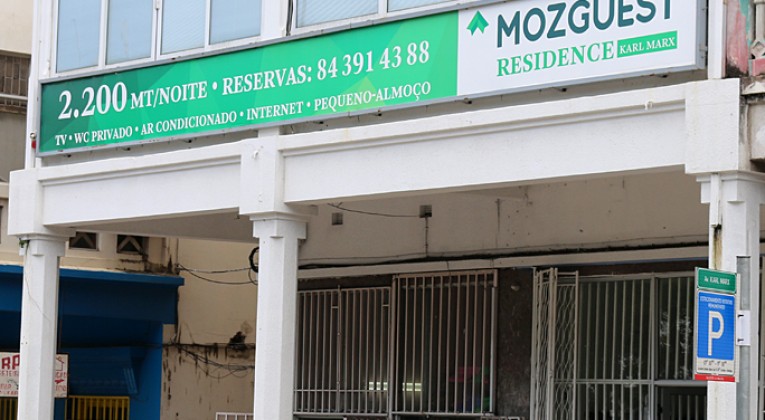 When researching lodging options in Maputo — which is the capital city of Mozambique — many of the room rates seemed to range from expensive to ridiculously outrageous.

…but one option stood out to me at $62.63 for the night, which included all taxes and fees; so I settled in on MozGuest Residence, which purports itself to be a bed and breakfast lodging option in Maputo — primarily because the room rate was significantly less expensive than many other lodging options in Maputo. It looked decent from the photographs posted at Expedia.com.

I had crossed the border from Swaziland earlier that day — here is detailed information on obtaining a visa to enter Mozambique if you are from the United States — and after dealing with a couple of hassles at the border crossing, I immediately drove into the town of Namaacha. Tijuana is a high-end resort city when compared to this place. People were all over the place, living in slum-like conditions. The road was practically a dirt road; and the entire town was filthy with garbage. Namaacha is not something the Mozambique Chamber of Commerce — if there is one — would be proud of showing visitors to their country, as it leaves a very negative first impression. I drove through as quickly as possible without exceeding the low speed limit — or hitting anyone.

Having to be careful — because of a combination of police patrolling the road; drivers who do not believe there are any laws which govern them; and people haphazardly crossing the street and walking in the road in both populated and desolate areas — as I drove in from the long drive on highways EN5 and EN2 through rather boring scenery since I left Swaziland and Namaacha, I finally arrived on the outskirts of Maputo after following behind a slow large truck for many kilometers…

…only to arrive at a toll booth to pay a toll and then be greeted by bumper-to-bumper traffic which seemed to have no rhyme or reason. The toll was not worth it, as highway EN2 had more heavy traffic, traffic lights, pedestrians, and pavement which could use repairs.

Combined with bad directions, I had to use my sixth sense to find my way to MozGuest Residence as I drove deeper into town, seeing flooded roads, drivers creating their own rules, and more people wandering the streets. As I attempted to drive through and around the streets which were gridlocked with traffic, people were coming out of the woodwork to direct me to park, attempting to make some money. Maputo felt like a lawless madhouse. I was at the point where I was tired from fighting all the traffic and pedestrians and other impediments.

I was happy to have finally eventually arrived…

I parked on the island in the middle of the street, as there were other cars parked there as well — and that was the only spot which was available. I saw no “parking hawkers” around, so — after hesitating for a moment — I brought my belongings inside.

I wandered up the steps and to a door with a paper sign which marked the entrance. The door was locked; so I had to press the button to ring the bell to enter. I looked downstairs while I waited that brief moment.

I felt like I was in a tenement slum. The door itself looked nice, though.

A person opened the door and warmly greeted me. This is what I saw when I first entered MozGuest Residence:

The office — there was no front desk — was immediately to the right; and ahead was the common area where breakfast was served in the morning. The door in the hallway which you partially see on the left turned out to be the door to my room.

It was immediately obvious to me that their official color was a bright fluorescent lime-ish green. That was the only part of the place which was bright. I was immediately given the key to the room which was assigned to me; and the employee opened the door, as it was difficult to open and lock — although I eventually got the hang of it: lift the door handle first before locking and unlocking the door.

Here is what I saw when I first entered the room:

A luxury hotel this was not.

Well, this was my “home” for the night; so I got settled in. The bed was fairly comfortable and I slept well; but there was noise both from outside on the street and from the hallway outside the door of my room as it was so close to the entrance. I was so tired that I actually slept through most of it.

There was a bar of soap and two towels awaiting me on the bed. The bottle of water was a nice touch; and the air conditioning was quite powerful — perhaps because the room was so small.

The “closet” — really an open area — had exactly one hanger on the rod. I decided to open the blinds and check the view out of the window in the room before quickly closing the blinds and entering the bathroom.

The bathroom was rather small as well.

There is not much I can say about this pitiful bathroom — and no, there was nothing separating the shower from the sink and toilet; so be prepared for a wet mess when you are done showering.

I woke up the next morning to check out the offerings for breakfast — available between 6:30 and 9:30 in the morning — which is included in the room rate.

I took a bottle of water. That was my breakfast for the day. Fortunately, I had some snacks with me.

The dining area was stylish, I suppose — looking on the bright side.

I went back into the room instead of stayed out in the common area.

Members of the staff were friendly, accommodating and helpful, though. They added value to what would otherwise have been a forgettable stay. One person — he seemed like he was anywhere between 25 and 32 years old and managed the place — said to me how there is a huge underserved market that MozGuest is starting to fulfill, as other lodging options are very expensive.

He certainly was correct about that.

Wi-Fi access to the Internet was also included in the room rate; and it was available at a reasonable yet reliable speed. I have accessed the Internet faster at other places; but I was satisfied with the speed available to me.

MozGuest Residence should only be considered if all you care about is a place to sleep. It was clean on the inside; the staff was friendly and helpful; and a bottle of water, Wi-Fi access to the Internet and breakfast are included in the room rate — which was the least expensive I could find for the night I stayed in Maputo. However, it seemed as though it was barely one step above a hostel.

Be aware of two things: first, the mirror on the driver’s side of the car I rented was stolen, as there was no trace of it anywhere on the ground. I was thankful that the other mirror was not taken — as well as no other damage was inflicted upon the car — but it was still inconvenient driving all the way back to South Africa without that mirror…

…and parking is not free, as one of the “hawkers” waited until I entered my car before demanding 40 metical, which was less than $1.20 — despite my obvious displeasure and frustration pertaining to the mirror on the driver’s side of the car being stolen. She did not care, though — all she wanted was her 40 metical. I finally reluctantly gave it to her just to get her off of my back, so to speak. I grumbled and drove away.

I did not report the incident to the police, as I understand that that could potentially cause more problems than resolve them; and I also did not bother to tell the staff of MozGuest Residence. What could they have done, anyway?!?

The room rate was $62.63 for the night, which included all taxes and fees. If you want more than simply a place to sleep — as well as a safer place to park your car — look elsewhere; but be prepared to pay dearly for it…

…and I understand that the more expensive room rates charged by those other lodging options are not worth it.

Food for breakfast was of poor quality
Outside noise was loud; as well as noise from common area inside
Small bathroom with no protection from shower
Too few amenities
Accommodations seemed as though it was barely one step above a hostel
Questionable immediate vicinity; but never felt unsafe
Unsafe location to park car — and no free parking is available

MozGuest Residence should only be considered if all you care about is a place to sleep and not much else.