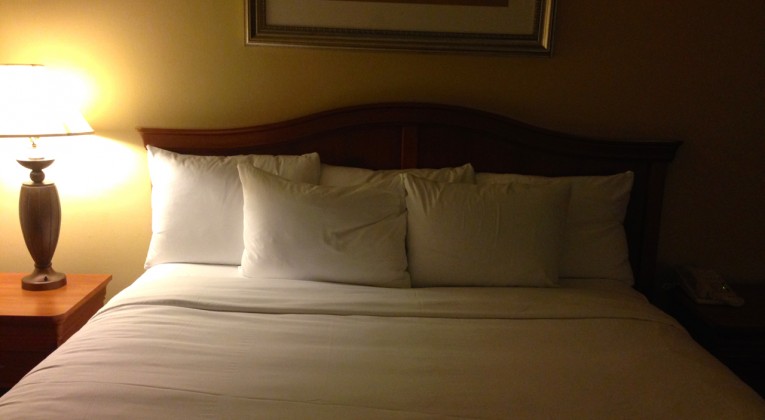 I recently found myself needing a one-night stay near Los Angeles airport. $57 Million is being poured into The Concourse Hotel at LAX Airport property which is in the process of becoming a Hyatt Regency. The price was right and I figured it was a good chance to check out some of the new features like 55″ LED TVs, new beds, wifi, and their new glamorous decor.

After arriving at LAX airport I walked outside to where the red lit-up sign indicated that hotel shuttles would stop. It wasn’t even 5 minutes before the bright purple shuttle arrived with plenty of room to take on new passengers. A short drive later, the shuttle pulled into a large parking structure and stopped without announcement. “Are we there?” I wondered. Some people stayed seated while others stood and got off the shuttle. I peered through the windows and saw that the hotel was up ahead so I hopped off as well. Just after I stepped off the shuttle I saw a car swing around a drop-off circle up ahead in front of the hotel and wondered why the shuttle hadn’t gone all the way to the front doors of the hotel.

There were two check-in lines with a long line of guests in the regular one. I stood in the one for Platinum and Diamond guests and was motioned to come forward by the only host behind the counter after he finished with another guest. It was a warm greeting, but quick since there were a lot of other people waiting and he was by himself. He didn’t offer a ton of information, just wanted to get me taken care of as soon as possible so he could move on to the next guest. As I was being handed a key I asked what kind of room it was, and he replied that there were no Deluxe rooms or Suites available so it was just standard. I was fine with that and I went over to the elevator to go check out my room on the 10th floor.

Looking at the map on the back of the door, even though my room wasn’t a corner room I saw just what the host had meant – every single room on that floor looked identical. The thin, worn out carpeting I’d seen in the hallway continued in the room and made me want to keep my shoes on.

The tall lamp nearest the window had a switch that had been broken off so even if the bulb had been in working order, there was no way to turn it on. This made that corner of the room darker than I would have liked since it was already late in the evening. The old bedside table nearest the window didn’t have a lamp either.

There were no wall outlets to plug in electronics on the wall near the bed, and since there was only one bedside lamp I didn’t really want to use that outlet.

In fact, I had difficulty finding an outlet at all and resorted to using the one on the base of the desk lamp near the window. There was a small fridge so I opened it to keep a juice cold that I’d brought with me. It was warm inside the fridge, so I adjusted the temperature. It made noise though so I changed my mind and unplugged the fridge instead. One positive note is that it looked as though the TV was newer.

The website had mentioned pillow-top mattresses but the bed was very soft and the springs seemed old, so I figured that the hotel would be changing them out soon. The bed had also been made in a hurry, and one side of it seemed to be have had al the sheets tucked in at the same place.

There was a shower/tub combo with shower curtain. An old shower head had a few of the spray streams going in wacky positions so if the curtain hadn’t been in place one of the streams would have gone straight out. The water flow was good enough though, and the temperature didn’t fluctuate.

A note on the wall said the shower had a scald guard. Supposedly, if you turned the water temperature too hot it would change the water flow to a trickle. I couldn’t help trying it out. I twisted the knob all the way to the left (which looked more like a sink handle than a shower lever) and waited. The water heated up, steam rose, and….no change. No trickle, no reduced water flow.

There was also too much moisture in the bathroom. There was an exhaust fan and a rocker switch to operate it. However, the switch didn’t work at all. I tried tapping both sides pretty hard in case it was just stuck, but to no avail. The exhaust fan remained silent, and I noticed areas of rust, and droplets of water joined together to stream down the sides of the walls and door, puddling on the floor.

The closet was well-sized, and the view from the windows was cool enough for someone who enjoys airports as it looked out over the lit LAX sign and a runway in the distance.

The room was too hot but the temperature controls looked brand new and was easy to adjust to a lower set point. The “air conditioning” pumped out hot air though, and it made a light noise. One of the ceiling tiles looked as if it had been moved recently and there was a discolored area from a previous water leak. I stood up to go check the thermostat but as I did so, the noise coming from the vent started to make a terrible racket. I went over to the desk phone and pressed the button for front desk. It rang…..and rang…..and rang.

I started counting the rings after about 6, and got all the way to 17 before I hung up. I called guest services, and got 22 rings before deciding it wasn’t worth the wait. It was late at night, I was tired, and I didn’t feel like calling a third time. I went back and turned off the a/c completely. Thankfully I wasn’t there during a heat wave so the room stayed an ok temperature.

At least there were “double-pained” windows (spelling from their website) so the noise from the airport was minimal.

I had thought that the property was already a Hyatt since it earned points and qualified as a stay. In actuality though, the hotel is currently just a Hyatt affiliate and will become a Hyatt Regency once the complete remodel is done.

I did get to bypass the long regular line at check-in, but there was no difference in room type.

I had forgotten to ask about breakfast options for Diamonds at check-in and didn’t have any breakfast coupons, so in the morning I called reception to ask.

Again, 25 rings and I hung up. I finally tried security which thankfully answered and then I had them transfer me over. I was glad to hear that I’d get complimentary breakfast in the restaurant; all I needed to do was stop by the front desk so they could get me set up. I got my belongings together, went downstairs, in the elevator I saw an ad about the hotel’s restaurant, and was looking forward to getting something to eat.

There was just one person behind the desk again but they were taking an exceptionally long time with a guest who was having some sort of issue. I’m a patient person, but after waiting for a long time without a glance in my direction I looked at my watch and realized that between the time I’d spent waiting for someone to pick up the phone and then waiting here at the front desk it just wasn’t worth it. I decided to pass on breakfast and get something at the airport.

The rate was right at $100, which was very reasonable. The stay also counted towards elite re-qualification. This was not a good stay though. The bed was too soft, several lamps in the room didn’t work, there were very few outlets, the bathroom had rust, and on and on.

Plus, not picking up the phone after 20+ rings is not ok, nor is ok to only have one person consistently staff the front desk. They’ll be changing out the room furniture, hopefully the carpets as well, and fix the air/electrical. They have the good location going for them and a surprisingly quick shuttle but obviously have some work to do, and I won’t be staying here again until it has been reintroduced as a Hyatt Regency.

A/C didn't work, Exhaust Fan didn't work, peeling wallpaper, burned out bulb, broken light switch, rust, old mattress
Customer service via phone was poor. They were either understaffed or no one wanted to answer
Front desk only had 1 employee, which meant longer lines
Very few outlets in room
Shuttle stopped in parking garage rather than right in front of hotel

This property has potential and I'm sure it'll make a great Hyatt Regency, but until the remodel is complete I won't be returning. Customer service is almost nonexistent, the rooms are in terrible disrepair, and there are far better options in the area.