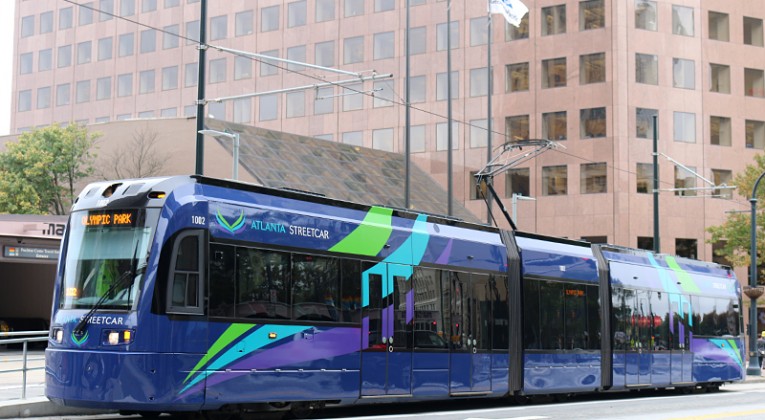 I had some spare time and decided to walk several blocks and ride as a passenger on the new Atlanta Streetcar, which has been in operation for approximately one year.

I boarded the streetcar at the Peachtree Center station, as it had conveniently arrived just as I arrived. All stations are located outdoors.

The streetcar had few people on it when I boarded; but at one point along the way, it did get fairly crowded with passengers.

There were a few stations along the way where the streetcar inexplicably spent at least five minutes despite no activity amongst passengers either boarding onto — or disembarking from — the streetcar.

The seats were not the most comfortable; but they sufficed. They were similar to seats which you might find inside of a bus or subway car.

…although one can hardly get lost. The streetcar follows a pseudo-figure-eight layout. If you happen to be at Park Place and your destination is Woodruff Park, you would save plenty of time walking one block than riding on the streetcar for seven stops, as it only moves in one direction.

One of the stops at which the streetcar spent an inordinate amount of time was Centennial Olympic Park, at which one of the attractions located nearby is the giant ferris wheel known as SkyView Atlanta.

Centennial Olympic Park is at the site of the 1996 Summer Olympics in Atlanta.

In order to accommodate the streetcar, tracks had to be installed in existing streets.

New road signs were installed around the area of the route of the streetcar. This is the yellow diagonal warning sign alerting motorists and pedestrians that an active track for streetcars is nearby.

Motorists need to ensure that their vehicles do not block the path of the streetcar when they are parked on the street.

Attractions and Points of Interest

The Atlanta Streetcar passes a number of attractions, art galleries and parks along its route, which are listed below. Additionally, it also passes many restaurants, hotels, places to shop, companies, educational institutions, libraries, and even a hospital, which you can easily find with this interactive map.

Here is a map of the route which the streetcar — whose service was officially launched on Tuesday, December 30, 2014 — follows; as well as the list of attractions you can visit near its route:

Streetcars run approximately every 10 to 15 minutes, depending on ridership demand and traffic conditions.

If you want to be able to ride on the streetcar but are unable to do so in 2015, the fares for the Atlanta Streetcar listed below are expected to be effective as of Friday, January 1, 2016.

*Children’s Fares: two children up to 46 inches tall can travel at no cost with a paid adult. Each additional child must pay the adult fare. School groups and others traveling with more than two children should contact the Atlanta Streetcar to make special arrangements for travel.

If you would like to ride as a passenger on the Atlanta Streetcar free of charge, you only have until Thursday, December 31, 2015 to do so before the fare of $1.00 per one-way trip is implemented.

The original budget for the Atlanta Streetcar projected $304,000.00 in revenue from ticket sales, which obviously is not going to happen due to the free rides for all of 2015. Private, philanthropic support and operational savings will supposedly offset these funds. Although a dollar will hardly break anyone’s budget, it would be nice if the fare remained free of charge for passengers, as it could help to boost the economy in the area in which the streetcar serves.

Free or inexpensive fare.
Convenient to many attractions, shopping, restaurants, office buildings, parks and other points of interest.
Clean mode of transportation.

Limited destination options.
Standard seats with limited comfort.
A wait of ten to fifteen minutes between streetcars — you could walk to many places in that amount of time.