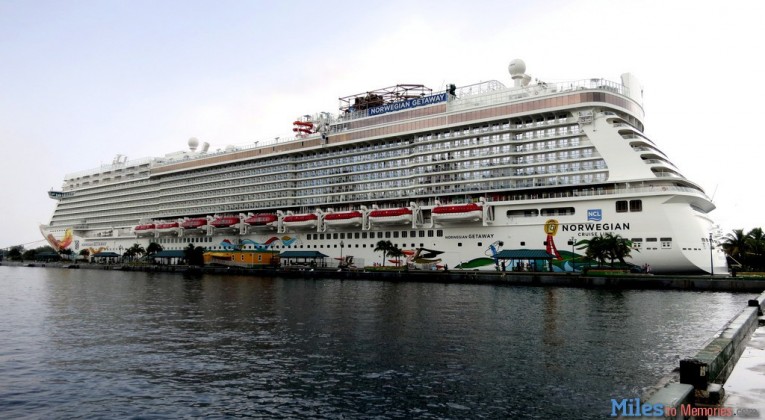 Disclaimer: I sailed on the Norwegian Getaway on a media rate. During the sailing I was provided a free dinner at one specialty restaurant and complimentary admission to the Illusionarium. Outside of that, the entire cost of the trip was paid for by me. All opinions shared in this review are my own.

More than a decade ago, Norwegian coined the term “Freestyle Dining” as a part of their overall Freestyle Cruising concept. This mantra is much as it sounds. Wear what you want (within reason), eat when you want and go to whichever restaurant you want. I definitely prefer Freestyle Dining to the more traditional set time dining, although I know many others don’t feel that way.

As a brand new ship built with Freestyle Dining in mind, the Getaway has just about every type of eatery and food you can imagine. About half of the restaurants on board the ship are included with the cruise fare, while many others cost additional money. In this part of the review, I will cover the wide array of food and dining options on board the Norwegian Getaway.

The Getaway has quite a lot of complimentary dining venues. The Eateries included in your cruise fare are: three dining rooms, the Flamingo Grill Cuban buffet, the Garden Cafe buffet, Shanghai’s Noodle Bar, O’Sheehans pub (which is open 24 hours) and of course room service.

All three of the Norwegian Getaway’s main dining rooms serve the same menu for dinner. Taste & Savor have the same feel and are located on Deck 6 Aft. The Tropicana Room, a throwback supper club is on Deck 7 Aft. The nice thing about the Getaway is that all three dining rooms share a galley, but the design doesn’t keep the decks from spanning the length of the ship.

While I have no complaints about the decor of Taste & Savor, the Tropicana Room is the standout dining room in my opinion. It has been designed as a throwback to the supper clubs that have mostly disappeared. During most meals you can enjoy live music and don’t be too shy to take your turn out on the dance floor.

Unfortunately my love for the dining rooms didn’t really extend to the food. In my opinion, the menu has been watered down in an effort to push guests to dine in the pay venues. With menu mainstays like fried chicken and spaghetti, don’t expect anything too fancy.

Thankfully I did find some food to like in the main dining rooms. Norwegian’s Caesar salad is always delicious and the lasagna on board was quite good. We also found some of the fish entrees tasty, along with appetizers such as the empanada and crab cakes.

Overall, I was slightly disappointed with the food in the dining rooms. This was my fourth Norwegian cruise in just over a year and I have noticed cutbacks even in that short period of time. Perhaps the food is better on the smaller ships without all of the pay venues, but I certainly hope this isn’t the future of what Norwegian plans to offer. As things are now, I would prepare to pay up to dine in some of the nicer restaurants.

In my opinion, buffet food on board a ship should be tasty, but not too fancy. In that way the Getaway succeeds. The Garden Cafe is the main buffet on board the Getaway. Located on deck 15, it carries a variety of types of foods including: Asian, barbecue, and a few different salad bars. Prime rib is also served in the buffet on a number of nights during the cruise.

One of my main complaints was item duplication. There are four sections of the buffet, each with similar items. For example, there are four salad bars, however each one has one or two unique items. I found that I had to make a full lap around all four areas just to build the salad I wanted! Making a lap is fine when the buffet is empty, but can get very annoying when it gets crowded.

Then there is the INSANE lobster policy Norwegian has enacted. Instead of serving lobster in the dining room like has been done traditionally, Norwegian has moved it to the buffet during one night of the cruise. Additionally, the tails served are very small, while the lines to get them often stretched 20-30 minutes. I suppose there is one good thing about this though. You can get  as many as you want. I talked to a couple of guests who had 20 or more!

The Getaway is also home to a Cuban inspired buffet called the Flamingo Grill. This buffet isn’t open all of the time, but the food was fairly good. The Flamingo Grill carries Cuban mainstays like black beans & rice, cheese croquettes and a variety of empanadas. We also found this area on Deck 16 to be much less crowded than the Garden Cafe below, especially on port days when only one side of seating was open.

I am not one to normally order room service often during a cruise, but I did do it once on my recent sailing. The Getaway’s room service menu is pretty typical for a cruise ship and includes continental breakfast and basic sandwiches and/or salad for lunch/dinner.

The two items I ordered were the Caesar Salad and the tuna sandwich. Thankfully the room service version of the salad is as good as the dining room version. It was tasty. The tuna sandwich was also very good. It only took about 30 minutes for my mid-afternoon order to reach the cabin. That is faster than I have experienced on other ships.

If you are in the mood for pizza, the Getaway also offers a $5 pizza that they will deliver anywhere on the ship. I didn’t personally try it, but several people told me the pizza was very good. I have to be honest that I am not a huge fan of the “deliver anywhere” policy. I saw people eating pizza in the strangest places.

O’Sheehans is open 24 hours and serves as the only complimentary venue where you can satisfy your late night cravings without having to pay. O’Sheehans is all about comfort food with a menu consisting of foods like buffalo wings & fish & chips. We found the food to be decent for a quick snack, but I wouldn’t make a meal out of it.

Shanghai’s used to be a pay venue, however it recently became complimentary. We dined at the noodle bar during one day of our sailing and found the food sort of bland. If you are craving Chinese food then this is perhaps your best option, but don’t expect anything too daring or unique.

As is expected with Norwegian and their “Freestyle Cruising” moniker, the Getaway has a number of premium dining experiences  available. Here is a list of specialty restaurants along with the corresponding fee (As of October, 2015):

During this sailing we had the pleasure of dining in Cagney’s steakhouse. We also were able to enjoy a performance of the Illusionarium complete with a banquet style meal served during the show. I’ll review that in the entertainment portion of this review.

Cagney’s is the Getaway’s high-end steakhouse and provides great ambiance and delicious food. My wife and I found the food served was on par with what you would expect to find at a similar restaurant on land. At about $30 per person, it is the second most expensive venue on the ship, but I feel it is well worth the money.

For our meals my wife and I started with an Iceberg Wedge. We also shared both the crab salad and shrimp cocktail. We found the appetizers to be the perfect size. Enough food to satisfy, but not too big as to ruin the main course.

For my main, I opted to get the giant 18 oz. Bone-in Ribeye while my wife went for the Filet Mignon. She also asked if she could get a lobster tail and while it wasn’t on the menu, they were happy to do it for her. We finished our meal with their delicious Oreo cheesecake. Indulgent for sure, but incredible.

Ocean Blue is a gourmet seafood restaurant with the cost of $39.95 per person. For that price you get to enjoy a menu developed by Jeffrey Zakarian. During our sailing we opted not to dine in Ocean Blue for dinner, however we did have a lobster roll for lunch from their window along the promenade. The lobster roll was delicious, but it was $10 and quite small for the price.

On the flip side, several people mentioned not caring for the food at La Cucina, the Getaway’s Italian restaurant. That is pretty much how I felt when dining in the Jade’s similar venue on a different sailing. The food just wasn’t anything special and not something I felt it necessary to pay for.

Norwegian has replaced their Ultimate Dining Package with the new Specialty Dining Package. Instead of having to purchase a package that gives you specialty meals everyday, you can now choose how many meals to purchase as part of the package. Prices range from $59 for three restaurants to $119 for specialty dining every night during a 7 night sailing. You can find out more details about this new package on Norwegian’s website.

I left my recent sailing on the Norwegian Getaway impressed with the food. Yes the quality and choice of food in the main dining rooms has changed, but it still wasn’t terrible. Thankfully I didn’t taste anything disgusting at any point during our recent sailing and we loved the food at Cagney’s.

With the Getaway and the other newer ships coming online, Norwegian is going all-in with their specialty restaurants and Freestyle Dining concept. If you are going to sail on Norwegian, just make sure to factor in the cost of the restaurants when figuring your total cruise fare. The specialty restaurants are meant to be part of the experience and if you opt only to eat the complimentary options, then you are missing out.