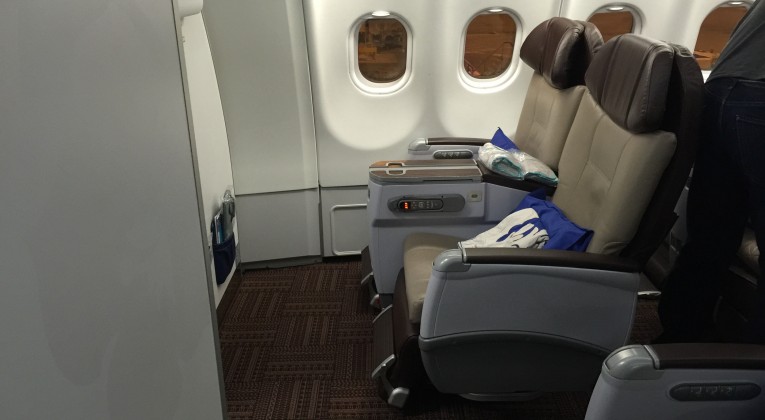 I know Hawaiian isn’t the preferred airline for miles and points travelers, especially when either flying directly to Hawaii or onward to Australia or other international points.

Simply the product isn’t truly an international first class type – it’s not a flat bed seat, nor is it even an angled flat seat. It’s a unique flight, and one I think people often avoid, though don’t know what to expect.

In Honolulu, you’ll use the Hawaiian Airlines lounge. This lounge is basically just a separate area to sit, with sodas on offer. Nothing else, so don’t expect much. In Sydney, you’ll use the Qantas Business lounge.  The Qantas lounge is fully stocked with an open bar and open buffet, which is more than descent. You can have dinner here prior to your flight, and the space is large enough, yet crowded, due to the vast amount of Qantas flights departing from Australia. The airlines has also contracted out several other lounges in its international cities, so it depends on where you’re flying to or from as to what lounge you’ll be allowed to access under your Business Class ticket.

The seat is a normal domestic first class seat, with about 10 degrees more of recline. It’s certainly better for sleeping than a domestic seat, but by no means a lie flat seat. Because of this, I personally had trouble sleeping. It is fairly comfortable for an in-flight nap, but difficult for a full night of sleep. In the center armrest is a video console that pops up, which is actually quite descent. The selection of movies were varied, but not extensive. Legroom isn’t bad, though if you’re interested in extra legroom, grab one of the center seats on the bulkhead – these have several more inches to spread out. Each seat features a leg and foot rest, though I really didn’t make use of these since they didn’t help with sleeping.

Here’s what I think makes Hawaiian great – the service was well above par. The flight attendants were consistently happy, and I was thanked numerous times for flying. Drinks were refilled consistently, and the food was very decent. The food was actually well above the standards of domestic premium class meals, and there was a nice selection of choices, though I felt that portions were on the smaller side. I’d fly Hawaiian again for the service, since they’ve got a leg up on many domestic carriers. You can genuinely feel the “Hawaiian spirit” throughout the flight, from the welcome cocktail, to the departure thank-you. The staff are generally well in tune to basic international standards, more-so than I was expecting on Hawaiian.

I’d certainly fly Hawaiian again, and wouldn’t avoid them, as many folks I think preemptively do, not knowing the experience. That said, I certainly wouldn’t have them at the top of my list for an international overnight flight, since sleep isn”t exactly the best without a flat-bed seat. For a daytime flight, they would certainly be a competitive option that I’d fly again. Because they fly wide body A330s on long haul routes, it beats out many of their domestic competitors who only fly 737s, or A321’s, which are narrow body planes with less space. Though some mainland based carriers also fly wide body flights on some routes, Hawaiian is fairly consistent, which sets them apart as far as aircraft usage.

Jamie Larounis is an avid traveler, blogger and miles/points educator. Traveling well over 100,000 miles a year and staying in hotels for over 100 nights, he leverages miles, points and other deals to fly in first class cabins, and stay in 5-star hotels. He shares his experiences, musings, reviews, tips, tricks, resources and industry news with you, the fellow traveler. Jamie also supports the Frequent Traveler University, a Frequent Traveler Education Foundation project, as a member of their organizing staff. Among several media spotlights, he's written for InsideFlyer magazine, USA Today and makes regular appearances as a featured expert discussing the travel industry on FOX News.