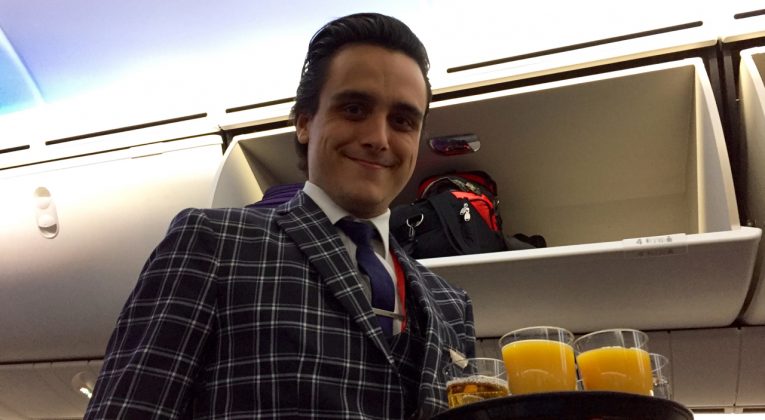 Low cost carrier Norwegian has broken in to the US market with several long-haul flights. Here’s a look at Norwegian’s Premium class, on a flight from Oakland, CA to London Gatwick, UK.

A Premium Class seat on Norwegian includes Fast Track and much-loved lounge access at most airports, and the Escape Lounge located in Terminal 1 near Gate 9 at Oakland Int’l Airport quite frankly, blew me away.

Being used to meager and paltry offerings in abysmally full lounges as is often the case with other carriers in the US (*cough* American and United), I wasn’t expecting to find a quiet environment with ample seating and fantastic food in the lounge offered with my Norwegian flight, but I did.

Comfy chairs for seating à deux were in one room, tastefully separated from the food area by magazine shelves. The lounge wasn’t huge, but there wasn’t a problem finding a seat. Another area beyond the expansive buffet offered upscale cafeteria style seating with booths, chairs, and bar stools. Outlets for charging were well-distributed through the lounge, and the free Wifi was fast.

The hearty locally-inspired food selection was akin to that of an Amex Centurion Lounge. The Escape lounge is also the same one that British Airways offers to their premium passengers departing out of Oakland.

There was a mouth-watering array of meats & cheeses, hot selections such as individual dutch ovens of mac & cheese, and refreshing salad items like mozzarella & tomato, and lentils with goat cheese. Crunchy avocado toast topped with goat cheese sat next to simple poached eggs, and sandwiches and croissants nestled up to walnut bread and honey. A dedicated area offered cookies and parfait style desserts such as chocolate mousse, and there was a coffee and tea station. Everything I tried was delicious. A bar at the back of the lounge offered complimentary alcohol.

Boarding for the Oakland to London Gatwick flight was out of Gate 3, and walking up I heard the announcement in progress about the different boarding groups. The gate agent informed that boarding group 1 would be families with small children and those needing extra time to board, including those in wheelchairs. Boarding group 2 was for premium passengers. Economy passengers would board as group 3, which went by row number starting at the back of the plane.

The posted boarding time came and went with no announcement, but 10 minutes later the gate agents sprung into action and boarding commenced.

Once onboard I was offered orange juice, water, or apple juice. I declined, having just enjoyed the offerings in the lounge.

There were just 24 of 35 recliner seats taken in the premium cabin of the 787-9 (Economy holds 309 passengers). Seats in Premium were arranged in a 2-3-2 configuration with 19 inch width and 46 inch pitch, and I had chosen seat 4F. The entire middle section of row 3 (seats D,E and F) was empty for my flight. At a super roomy 46 inches, legroom in Premium on Norwegian’s 787 is more than Premium Economy options on any other carriers, comparable only to BA’s OpenSkies flights from New York to Paris.

A blanket had been placed on each seat, and I took mine out of the package and held it up. Soft and lightweight, each side was a different tone, edged by the bright Norwegian red.

The captain made an announcement that he was expecting an on time arrival at London Gatwick at 10:58am, and we were shortly on our way with wheels up at 5:50pm.

The lights were dimmed for the initial climb, and then the cabin was lit again though with a softer shade. Headsets were distributed, and an announcement was made that the meal service would be following soon.

One armrest held the tray table, and the other had the personal video player. It was labeled Lift, and I did gingerly but nothing happened. Pulling harder the unit sprang to life and opened up to reveal a USB port. Each seat has not only a USB port, but also a standard charging outlet. Each seat in Premium has a footrest that can be raised and adjusted.

Drinks were served next, and my still water and wine were delivered by a cheerful cabin crew member from the trolley that came down the aisle.

I checked out the selection on the AVOD. There were 10 new release movies, about 30 classics, and an assortment of TV shows.

Apart from movies, you can also order food and drinks (champagne, too!) throughout the flight via the handy touchscreen.

There are two lavatories in the Premium section of Norwegian’s 787-9, and each has the extra features of automatic faucets and motion-activated toilets.

10 minutes later the trolley returned with dinner. There were no paper menus distributed, but the crew patiently explained the choices. The evening’s choices were beef filet in a horseradish sauce with vegetables, chicken breast, or blackened shrimp and grits.

I chose the shrimp and grits, and was offered bread to accompany it.

The meal smelled great, and was hot. It came in a box with plastic utensils rather than on a hard tray with metal items. The grits were creamy with a cheesy sauce and sun dried tomatoes, and before I’d even finished the first bread the attendant was back again with the basket in case I wanted more.

The crew was very attentive, going up and down the aisles simultaneously asking if anyone wanted more wine, more water, etc.

I polished off the shrimp and grits, and gingerly ate a few bites of the sweet potato/bean/corn salad. The chocolate cake looked good, but was overly sweet and tasted of coffee.

Flight attendants came around offering cognac and small bottles of Baileys next.

A sign on the bottom of the meal box as I handed it back made me smile, which said an empty box = a full tummy.

Meal service in the cabin was completed for the most part at 10 minutes past 7, and all trash was removed swiftly by the crew.

It suddenly struck me that the cabin was wonderfully quiet. I removed my QC-35’s for a minute in case it had been dampening some sounds, but I had been right. The brand-new 787 Dreamliner lends itself to a quiet ride for passengers. In addition, no one was talking loudly, there were no clanging noises coming from the galley, no fussing babies, or noisy passengers opening/closing bins. I reveled in the quiet and relaxed.

10 minutes before 9am, the lights came up a bit and the breakfast trolley came down the aisle.

Tea, coffee, or juice were offered, and a breakfast box. Rather than a stale muffin or lukewarm omelet, the breakfast box contained all the fixings for me to make a fresh open-faced sandwich with cream cheese, salmon, capers, and tomato. Bonne Maman berry preserves on buttered bread made for a sweet finish to the breakfast.

The energetic flight attendants came around again to round up trash and blankets, and offered a last round of drinks. The aircraft has LED mood lighting, and a special sequence cycled through a colorful and cheery series before starting the descent.

I was impressed by Norwegian’s Premium Class product. The lounge was stellar, the seat was roomy and comfortable with good recline (and footrest!) and the meals were tasty. As far as Premium Economy products go, this is at the top end, offering far more legroom and extras for an extremely reasonable cost. I was delighted by the service provided by the crew as well, and would definitely take another flight in Norwegian Premium. I look forward to seeing Norwegian continue to grow, and add more routes so more people can experience their product.