I believe TG is attempting to capture some of that YVR traffic to Asia, but who knows! 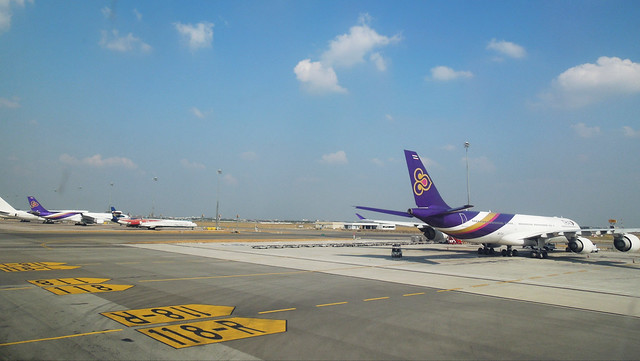 Orient Aviation quotes Thai Airways’ vice president of network and fleet planning as saying that Thai Airways is considering adding nonstop flights to Seattle, and definitely wants to add flights to the US by the fourth quarter of 2018. The flight from Bangkok to Seattle would cover a distance of just under 7,500 miles, which isn’t actually that long — it’s a full 1,500+ miles shorter than the world’s longest flight, between Doha and Auckland. Bangkok to New York would be quite a bit longer, at ~8,700 miles.

A lot of the YVR traffic is going to Hong Kong. BKK is not as well positioned for it as, well, HKG. Why would you take YVR-SEA-BKK-HKG instead of the nonstop, especially if you have to deal with transiting the US and there’s no sterile transit in a round trip, so you have to collect and recheck luggage and so on?

I would think TG is probably more interested in SEA or US traffic to SE Asia and India, and ex-BKK traffic to the USA getting efficiently sent to the USA (SEA does save some flying gas can money, and though there is a much larger Thai community in LAX, maybe it is more important not to fly the extra 1,000 miles and let local carriers handle the last bit). The EK-AS partnership has worked out OK. Maybe TG wants some of that.