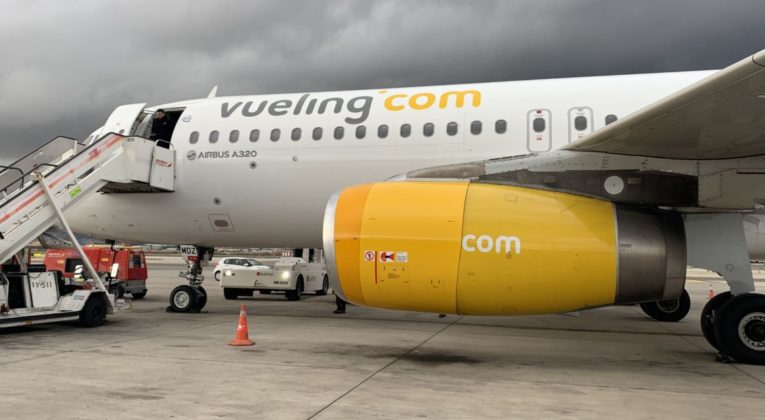 When searching for a flight from Paris to Barcelona, I hoped to find the cheapest option. Vueling Airlines popped up at under $50 each so I snagged them up! My friend from Barcelona had previously flown with them and she said they were decent so I took her advice!

Sadly, we were notified that our flight was delayed about 1 hour before our scheduled departure of 1:35 PM. It said the flight would be delayed 2.5 hours!

Thankfully, I had access to the Premium Traveller Lounge, which was an amazing escape from the hustle and bustle of the terminal. It made the delay much easier to deal with.

Vueling did a good job keeping us notified on the delay through their app. They posted updates every 30 minutes.

Sadly, no agent was to be found after security to provide food vouchers. The agent of the airport itself said Vueling doesn’t have any help desks past security + gate agents can’t give out the vouchers. Pretty sucky am I right?!

On the website it says if your flight is delayed by more than 2 hours, our ground staff will offer you the following, free of charge:

“Tickets for meals and beverages according to the length of the delay.”

Which we got none…. laaaaame. Good thing I had finger food in the lounge.

You can check into your Vueling Airlines flight 7 days before departure and they can “randomly assign” your seats for free if your booked under their lowest (Basic) fare. So, I checked in just a couple hours after check in opened and got row 28EF (middle + window) out of 32 which are part of the cheapest seats in which you can pre-reserve them for $4.99. I think that possibly checking in later can get you closer to the front, as long as the seat map still shows some available seats. Before I checked in, the plane was essentially empty with most seats still available/not assigned yet.

Boarding was uneventful, minus the positive that I found overhead space only 7 rows ahead of me.

Legroom was better than I anticipated for me being 5-9. In my opinion, it was roomier in terms of legroom than easyjet. For my friend who’s 6-3, after 20 minutes of flying he complained of his legs hurting. His knees were touching the tray in front but they were not overall squished.

The plane was pretty clean, which was surprising to me since the plane just arrived from elsewhere and they did a 30 minutes turnaround.

We pushed back at 4:45 PM, and since our scheduled departure was 1:35 PM we ended up leaving over 3 hours late. The captain told us the flight would take 1.5 hours.

About 30 minutes after takeoff, the on flight service commenced. Nothing was complimentary and drinks averaged around 2.6 euros each. They had an array of snacks and meals.

After a rough patch of turbulence, we started our descent about an hour after takeoff. Finally, the plane touched ground at 6:18 pm, 3 hours and 3 minutes late. We arrived at the satellite gate at 6:25 and took a bus to the terminal.

After the flight, I filed a EU 261 compensation form online on their website and within 2 days Vueling responded saying that it was due to a reason beyond their control (ie. weather). In contrast, the app said it was a “maintenance” issue which is not beyond their control… maybe it is time to use a third party! I’ll keep you all posted.

Overall, Vueling Airlines isn’t a horrible way to fly a short hop. Just be prepared for very lackluster customer service of a delay arises on their end as it’s a “no frills” low cost carrier.

Have any questions? Comment below or email me at [email protected]. You can also view all my other posts here! Thanks for stopping by!