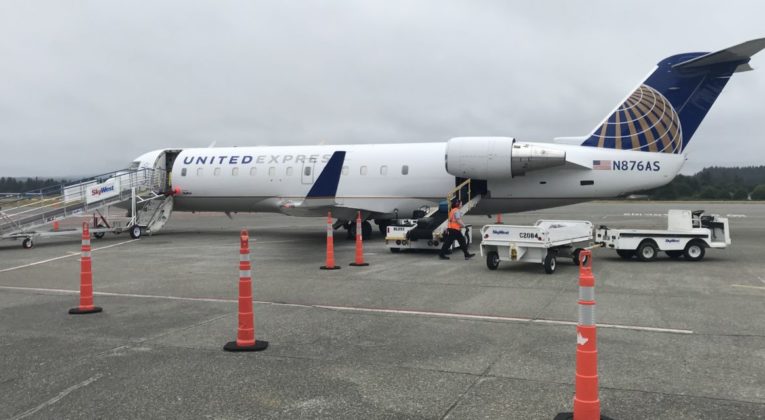 We all know United Airlines doesn’t have the best reputation. My list of gripes with the airline is long (SEE: United’s Problem is…Everything). Between canceled flights and lengthy delays, they tend to disappoint me more times than not. I’ve about given up flying them out of our local airport. But I did give them a chance over the past week, and our flights went smoothly.

One aspect that is rarely an issue is their in-flight service. This is not to say that their service is stellar. Most interactions are pretty subpar. United flight attendants don’t seem to share the same exuberance I see in many Delta flight attendants. I don’t know what Delta feeds their staff, but they need to share.

However, there is one way United consistently goes above and beyond.

In three words: be a kid. I know. You were hoping for some useful tip and don’t think I’m funny. Yet this has been so consistently true that it *is* funny, at least to this dad. Hear me out for two more minutes.

When my kids and I flew from Arcata to Tucson last year, the flight attendants doted on them. The load factor was low. After the handful of first class passengers on our E175 were served, the attendants brought my kids snacks from the first class snack basket . No one else in economy got these snacks. Not even me. Just them. They were handed more snacks before we deplaned. Seriously. It needed to end.

To Be A Child Again

We had a similar experience on our connection to Tucson. It didn’t help that we were literally three of maybe a dozen people on the flight. The kids were again given snacks from the basket, and then an entire bag of candy just before we deplaned. This wasn’t anything standard-issue; it was probably the flight attendant’s own stash. Unfortunately, dad had to step in and prevent (or at least delay) the consumption.

On our flights a couple days ago, it was rinse and repeat. After the quick snack and beverage service on our CRJ hop to LAX, the flight attendant grabbed a handful of stroopwafels. He handed one to my son seated in seat 1A and then moved on. Hey…what about me? I love those things. Been meaning to try that stroopwafel McFlurry.

The same flight attendant proceeded to pass out stroopwafels to all the other kids onboard (there were about 5-6). It was a very nice gesture. Yet things didn’t end there. Ten minutes later, he repeated the same with maple wafers. Sugar for the kids. Nada for dad. Well, there were still pretzels. Yay? True story: United has you covered if you’re a kid.

I’m glad the United (more accurately, Skywest) flight attendants go out of their way to make sure my kids enjoy themselves in the air. While my older two really don’t have any issues, and my son flat out loves air travel. It’s a nice gesture. I hope they treat kids like this all the time. It’s been such a common experience on nearly every United flight I’ve taken with my kids that I have to imagine these aren’t isolated incidents.

Tough luck, parents. The secret to great United service is to be a kid.

Anyone else noticed United’s special treatment for kids?