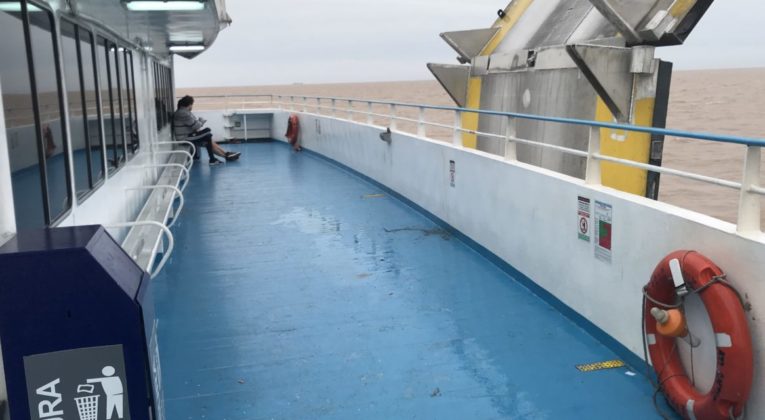 During our trip to Argentina and Uruguay back in April, my daughter and I traveled from Buenos Aires to Colonia del Sacramento on the Colonia Express Ferry. There are a few different ferries between Buenos Aires and both Colonia and Montevideo. After some consideration, we opted for the Colonia Express Ferry since it was both the cheapest and it would allow us to spend the day in Colonia del Sacramento. From there we planned on heading onwards to Montevideo after exploring the UNESCO-listed town.

I want to use our experience and research on the best ferry from Buenos Aires to Colonia del Sacramento as a guide for others who looking to make the trip across.

The Colonia Express Ferry runs between Buenos Aires and Colonia del Sacramento. Like Buquebus, one of the leading competitors, it serves the route to Montevideo as well. There is a third option, Seacat Colonia. Some of the other ferry routes include onward travel to Punta del Este, Uruguay, and Carmelo, Uruguay.

I booked our tickets online using the Colonia Express website. Multiple sources I read had stated that it is absolutely terrible, but it seemed to work just fine. It’s possible they’ve updated it. There are also English and Portuguese language options. Expect to enter all necessary info, including address and contact info, as well as your passport number, since it is an international crossing. I suggest booking online, as you’ll get the best “economia” prices.

We paid ARS $3,309 for our tickets (~$75 USD). This is for a one-way crossing, booked fairly last minute. We would have paid $20-30 more for Buquebus, depending on the sailing. The early sailings are nice since they get you to Colonia early enough to enjoy a full day, plus return to either Buenos Aires or Montevideo by evening. If your plans are locked in, I would suggest booking at least a few weeks in advance to get better prices (one-way fares can be as low as ARS 1,000). If you need to bring a vehicle, that is an option. But I don’t expect this to be a necessary piece of info for foreign travelers.

The Colonia Express Ferry terminal is located at the south end of Puerto Madero, near the entrance to the harbor. We conveniently rode right by it during our Biker Street Buenos Aires tour, so I knew right where we’d need to go. It’s an easy taxi ride from the Hilton.

Our Colonia Express Ferry ticket stated that you must arrive 90 minutes prior to departure. Given our 8:15 a.m. sailing time, this meant we should arrive at 6:45 a.m. I pushed things by 15 minutes, allowing us to enjoy the hotel breakfast before we left. We had no issues arriving then, but I wouldn’t rusk much later than that. Navigating the ferry terminal and boarding is pretty easy. I stood in line to ask for help, just to ensure we weren’t missing anything. We were kindly directed to the happens all on departure. This is one of the reasons you are asked to arrive 90 minutes prior to your scheduled departure. After entering via the first queue with a valid ticket, we proceeded through both Argentinian and Uruguayan immigration.

Given it took us a total of 20-25 minutes from entering the ferry terminal until we made it to the waiting area, there is definitely reason to arrive early. Our sailing was not especially full. A full ferry might really extend the process.

Our ferry vessel was the Atlantic Express. This Colonia Express ferry can hold around 500 people. Our sailing wasn’t anywhere close to that full. All the seating is interior, with the exception of an outer deck area with a few benches if you want to catch some fresh air. I was surprised with how narrow the seat pitch is on the ferry. The seats are well padded, but they don’t give you a ton of legroom. I’ve been on many buses and trains with much better pitch. The Colonia Express ferry seats were also pretty dirty, and a handful were broken. Definitely not a sparkling new vessel. We found some seats by the starboard windows. My daughter was exhausted, so she laid down across three of the seats to nap until during our transit from Buenos Aires to Colonia del Sacramento. I explored for several minutes as the rest of the passengers got settled in. The bulk of the passengers chose seats along the edges of the ferry near the windows.

At the back of the middle section there is a rack for luggage. At the front of the section is a lounge area with some nicer seating and TVs. There are no reserved seats. You can sit wherever. The Colonia Express ferry has a drugstore selling a variety of necessities. Behind that is the remainder of the shop which offers a selection of cosmetics, foodstuffs, and liquor that are sold tax free, as we are conveniently between borders. The store accepts U.S. dollars, as well as Brazilian reals, in addition to the pesos of Argentina and Uruguay. There is also a currency exchange kiosk. I went to check the rates, but they are not clearly posted. I didn’t really want to ask the clerk just to satisfy my own curiosity. The Argentinian peso generally doesn’t exchange all that well in Uruguay, which has a more stable currency.

The last place I wandered was onto the rear deck. I’d be back a few more times during the sailing to enjoy the views of Buenos Aires as we departed Argentina. After we got settled into our seats and the ferry began to depart, I headed out to the rear deck once more. My daughter fell asleep quickly, and I’d head back every 5-8 minutes to check on her. As the ferry leaves the dock it makes a full U-turn, letting you enjoy views of Puerto Madero from the rear deck as you leave Buenos Aires. As the ferry gets further away from the Colonia Express terminal, you get a nice view of the bridges at La Boca. But soon it is the open waters of the Rio de la Plata. The best part is honestly watching the full skyline of Buenos Aires fade away into the horizon. The wind was chilly, and the spray would hit now and then, but it was a lovely place to enjoy the view. The Rio de la Plata is so insanely brown! This river has to dump a ridiculous amount of sediment out into the Atlantic.

There is definitely some swaying as you get out into the middle of the river. If you’re prone to motion sickness, make sure you take something for it. You’ll also need your sea legs walking up and down the ferry. The swaying got bad enough that an announcement was made over the PA system for passengers to stay in their seats.

You can still see the distant skyscrapers of Buenos Aires as the coastline of Uruguay appears on the opposite horizon. Given the slight haze, I didn’t think we would be able to. I’m sure on clear days you can faintly see Buenos Aires from Colonia del Sacramento.

Slowed down as we entered the waters close to Colonia at about 9:35. Our arrival was very delayed, however. Best I understood, there was another vessel just departing. Although we arrived into Colonia around 9:45, we didn’t dock until nearly 10:40. Very frustrating, as we lost an hour to explore Colonia del Sacramento.

The plus side: my daughter slept a solid 90 minutes, which was helpful. With the early wake-up after four busy days in Buenos Aires, she was pretty exhausted. We finally disembarked the ferry and entered Uruguay! Although we had technically been “in Uruguay” the whole time, having passed through immigration back in Buenos Aires. The only thing that remained on the Uruguay side was customs. All luggage and large bags must be sent through the x-ray units. After that, you’ll enter the arrivals hall. Here you can get info on rental cars and day tours of Colonia del Sacramento, and withdraw money at the ATM. We had issues with the first ATM, but eventually found one that let me withdraw enough Uruguayan pesos. Due to the unfavorable exchange rate, I made sure I used up all but a few bills (to keep as souvenirs) in Argentina. We left the ferry terminal on foot, headed for the bus terminal where we would store our bags. It’s a very short walk. Colonia itself can then be easily explored on foot. The old part of the town is an easy walk, and a day is more than enough to explore.