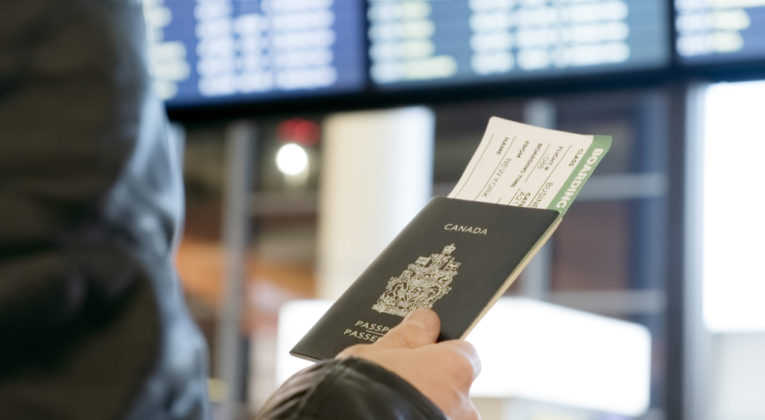 I think most of us in the U.S. take for granted that (barring some exceptions) we pretty much always have a valid form of ID on us – our drivers license. Moreover, our constitution actually protects us from having to carry any form of ID at all, if we don’t want to. Not all countries enjoy such freedoms, but when you travel, you are subject to the local law. So, do you need to carry your passport in Europe?

Italy, for example, requires everyone to have a valid form of ID at all times (including citizens) – and on the off chance you do get stopped, you’ll need to produce a passport. I’ve also needed to input my passport data when requesting an Uber in Barcelona.

So, when my friend Jonathan messaged asked me “do I need to carry my passport in Europe?” I though it was a great question for this post. Does he?

As a luxury travel advisor, part of my job is to ensure my clients have every single detail they’ll need so they’re not stressing. Knowing passport rules and regulations is key. Do you have a burning travel question? Email it to me at sarah@pointmetotheplane.com and keep an eye out for it! Questions may be edited for clarity or length.

Question: Do I Need to Carry My Passport With Me In Europe?

Thanks for the great tips on Portugal! I’m travelling to Europe this fall (Rome, Barcelona, and Lisbon). Do I need to carry my passport in Europe, or can I leave it in the hotel?

Answer: It Depends on What European Country You’re In

Hi Jonathan, thanks for the great question! There are so many different rules regarding passports, and its very country-dependent. Then, there are all the tips on how to keep your passport safe! And, finally, the debate rages on across the TripAdvisor and FlyerTalk forums! Who on earth do you listen to!?

Yes Or No – Carry Your Passport in Europe?

In general, across Europe, you should carry either your passport or a copy of it. You are required by law to have a valid form of identification.

If I had to estimate, I’d say I have my passport on my person about 95% of the time. It’s just simply in my travel wallet that goes where I go. If you aren’t going to carry it, carry a color copy.

There are some times you will need your passport in Europe, regardless. Checking into a hotel, for example, and flying between countries. You’ll also need to show your passport when renting a car, in addition to your drivers license. Because most Western European countries are Schengen zone members, you don’t need to show it when crossing the border. Exceptions include crossing into Switzerland or Croatia by land/sea, or flying into Ireland or the U.K.

Those are obvious, but what about the not so obvious?

You will need to show your passport to claim the VAT tax refund at a store. In some places, and at times, you can get away with showing a copy, or even just knowing your passport number by heart. To me, it’s not worth risking it if you get that one salesman who’s just a total stickler for the rules (and who wants to get stuck paying foreign sales tax?). A form of ID is also sometimes required to pick up tickets, as in show tickets or sporting event tickets.

The other five percent of the time I’m in Europe, I leave my passport at the hotel.

I’ll often leave my passport secured at my hotel if I’m going out for an evening; It’s extremely rare for bars in Europe to request ID, even for those who look young. However, I never assume I won’t be asked for an ID at a bar, either. In my experience, my U.S. license works fine for age verification purposes in Europe.

I also, as mentioned above, needed to input my passport number when I ordered my Uber one morning in Barcelona!

What Is A Valid Form of Identification?

As I already noted above, Italy’s law requires everyone to carry a valid form of ID on them. So does Spain, Portugal, Germany, the U.K., Ireland, … the list goes on. Unfortunately, European countries don’t consider our U.S. drivers licenses to be valid forms of ID, so therefore, non-E.U. citizens must carry a passport in Europe.

I’ll admit it’s unlikely, but legally, the police can come up and ask you for identification at any time.

Why Do European Hotels Ask For My Passport, and Is It Safe?

You will be asked to show your passport to the hotel upon check in.

This is because some European laws require that all guests are registered with the police. It’s totally normal. I’ve even left it with the front desk and had it returned later. This occurs often enough for me, so I don’t usually question it.

John, editor of PMTTP, brought up that he’s had to leave his passport at the front desk. What do you do if they say they need to keep it? I did some digging, as I’ve always had my passport returned within an hour or so.

In late 2015, the U.K.’s Daily Mail asked this question. The truth is, you are within your rights to not hand the passport over for the duration of your stay. European laws require that hotels keep the names, nationalities, and details of all guests on file for 12 months. That is what the hotel takes from your passport when you show it on arrival. If they are busy, they may ask to keep it so they can record your details at a less busy time. It’s common practice, but it makes even the most savvy traveller a little wary at times.

However, once you’ve given them the details (or even handed them a copy of it to keep), you are quite within your rights to ask that they return your passport to you.

Various Laws in Europe Regarding Identification

Spain: Spanish law is similar to Italian, although Spanish police will accept a copy of your passport. (As an aside, I always have a photo of my passport on my phone. Sometimes this suffices.) I suggest also carrying your drivers license as a second form of ID. A TripAdvisor forum post (from 2016, now closed) states that if the Spanish police sense a problem, they will accompany you to your hotel to view the original passport. I suspect, though can’t confirm, that this sentiment applies across Europe.

France: According to Atout France, French police recommend carrying your passport and a copy of your passport separately. It is French law that you carry some form of identification with you at all times; this doesn’t need to be a passport.

United Kingdom: You must produce a valid form of identification (your passport) in the U.K. when asked for it.

So… If No One Will Ask For It… Do I Still Need to Carry My Passport in Europe?

How Do I Keep My Passport Safe?

There are a few different ways to keep your passport safe. Plenty of travel and luggage brands make the under shirt wallets. These lay flat on your chest, under your shirt, and hide valuable contents from would-be pickpockets.

If you don’t want something like that (I don’t use them), then place your passport into a travel wallet and put that wallet in a hard-to-get-to-pocket of your bag. Ideally, a pocket that someone behind you can’t zip open.

If you do plan to leave your passport at the hotel, place it into the hotel safe. If you think you’ll forget your passport, write yourself a note. Other items I put in the safe include my computer, Nikon, and jewelry. I’ve yet to leave any of them in a hotel!

Jonathan, I hope that answered your question about carrying your passport with you while in Europe. Have a great time!

Do you have a burning travel question? Email it to me, Sarah, at sarah@pointmetotheplane.com and look for it in a future post! Questions may be edited for clarity or length.

Sarah is a luxury travel advisor and avid traveller. When she isn’t writing for Point Me To The Plane you can find her crafting custom itineraries for clients or exploring the far reaches of our wonderful planet. Read more about her adventures at The Girl With the Map Tattoo.