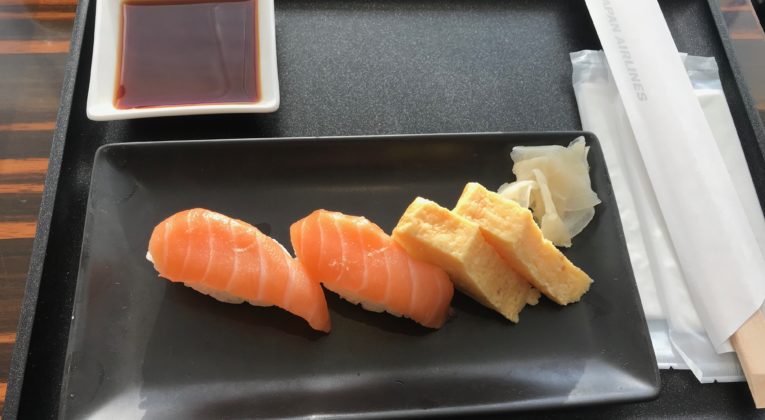 My experience at the Japan Airline First Class Lounge Narita was sub-par. The lounge, although mostly empty the first time I visited, can get quite crowded (like my most recent short visit). The food is the highlight, with fresh sushi made, but the amenities do not make it competitive with most First class lounges in the world.

The Good: Fresh sushi, anyone?

The Bad: Small-ish lounge, with limited facilities, showers are not as glamorous as in other lounges, no sit down table service.

The Noteworthy: In early 2017 (if I remember correctly) JAL removed spa services from their First and Business class lounges, and replaced them with mechanical massage chairs.

My inbound flight to Tokyo was quite early, which meant that I had enough time to go through the duty free shops before heading to the lounge. When I arrived at the lounge, a friendly agent pointed me in the direction of the first class lounge when she realized I was a oneworld Emerald member.

The lounge itself is not too large. It feels large enough when there aren’t that many passengers heading out on departures, but it can get crowded. There are two main seating areas. One is alongside the entrance, which also has some cubicles with massage chairs. Then there is the main seating area, which consists of one large space with tons of chairs. The cream colors of the furniture contrast well with the dark colors of the wood floors and panels. In the morning there is a lot of natural light coming through, even when the translucent blinds were lowered. It is also worth noting that there is a fairly large baggage storage room, which I found to be empty when I was there.

There are a few massage areas. Some are located along the entrance, in the cubicles along the hallway to the main seating area. There are some in what once were actual massage rooms. This made me quite sad, as a chair massage is not as good as a real massage. You could still clearly see that these rooms were meant to be used as proper massage rooms. This was a real let down on the airline’s part, it sets them apart from the business lounge.

The only real highlight of the lounge is in the food. I love Japanese food, especially sushi. They have a sushi bar with chefs making fresh sushi. I ordered a plate, and then another, and finally another. There is also a buffet that has curries, other Japanese delicacies, and some Western options. Drinks are self serve, and there is a wine and champagne area. There was a cool looking machine that turned out to be an automated beer dispenser. It looked cool, but I didn’t try it because it was too early for drinks (for me at least).

I was quite disappointed by the JAL First Class Lounge Narita. It could have so much potential. The airline is A-MA-ZING in the air, but their ground product is arguably one of the worst First class ground services I have ever experienced. They should have a sit down dining area, and should have kept the massage service for First class passengers (even if it was a short 10 minute treatment). Mechanical massage chairs are not a replacement, and are subpar when you think that Thai Airways has a full hour massage for their First Class passengers.

Overall, the lounge is ok. I would not make it a point to visit it the next time I go to Narita. It is better than waiting at the terminal, but at most it is as good as a normal business class lounge.

What do you think? Have you visited the Japan Airlines First Class Lounge NRT? What was your experience like? Let us know!

Here is a list of all my flight reviews: The Millennial Traveler Flight Reviews

Here is a list of all my lounge reviews: The Millennial Traveler Lounge Reviews