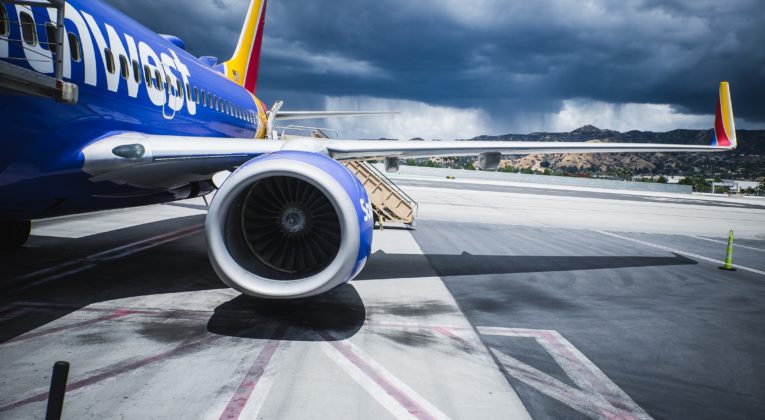 Many people either love or hate flying Southwest Airlines. Its unique boarding process and open seating policy garners mixed reactions among travelers. While it can be stressful hustling to get a good seat on Southwest Airlines, I’ve found that with a few simple strategies that dreaded middle seat can easily be avoided.

Southwest Airlines has a unique open seating policy. Basically, seats aren’t assigned. When you check in for your Southwest flight, you get assigned a boarding group (A, B, or C) and a boarding position (1-60). Your boarding group and position determine the order in which you will be allowed to board the flight. During the Southwest boarding process, passengers are instructed to line up in order based on their boarding group and position.  So, passengers holding A group boarding passes board first, then B, then C. Within each group, passengers will line up based on their numbers.  For example, A1 will board before A20.  Upon boarding the flight, you may choose any open seat.  Seats on Southwest flights are in a 3×3 configuration.

The Earlier You Board, The Better Your Seat

This might seem obvious but it’s still good to touch on. I’ve found that an A group or early B group (B1-B30) is always sufficient to provide me with several good open seats and plenty of overhead bin space. B31-B60 can be okay too but it depends on how many people you’re traveling with, how full the flight is and whether the flight is connecting from somewhere else. The C group usually means “center seat” and may require you to also gate check overhead bags.

Check in EXACTLY 24 Hours Before Your Flight

If you want to get a good seat on your next Southwest Airlines flight, follow this rule. Check in opens 24 hours before your flight’s scheduled departure time. The earlier you check in, the earlier your spot in line will be. Many passengers will also be checking in 24 hours before the flight so a few minutes or seconds can make a big difference in your boarding group or position.  This is especially true on weekdays.  My strategy is to set an alarm or calendar entry five minutes before check in opens.  I pull up my reservation, enter all the necessary details (name, confirmation number) and wait.  As soon as the clock hits check-in time, I hit that check in now button.

Can’t Check-in 24 hours Prior to Your Flight?

The only way to absolutely guarantee an A1-A15 boarding position on Southwest is to purchase a Business Select fare. This isn’t the most attractive option for leisure passengers though as the fare is more expensive.  If you still want a crack at that A1-A15 spot but don’t want to purchase a Business Select fare, you can try Upgraded Boarding. Warning: this is not a guaranteed option as it may not be available.

On the day of travel, inquire at the gate or ticket counter before the boarding process begins. If Upgraded Boarding is available, you can secure a boarding position in the A1-A15 group for $30 or $40 per flight, depending on your itinerary. A-List and A-List Preferred Southwest Airlines Rapid Rewards members are also automatically assigned boarding positions ahead of general boarding – just like EarlyBird but without the fee. Not much you can do about that.

Traveling with a Child? Familiarize Yourself with Southwest Family Boarding

An adult traveling with a six years or younger is eligible to board during Southwest Family Boarding. Family Boarding on Southwest occurs after the A group but before the B group. If you already have an A group boarding pass, go ahead and board with the A group instead of waiting for family boarding.

Don’t Arrive Late to Your Gate

I repeat, do not arrive late to the gate for your Southwest flight. There is no point in having an A or B boarding group if you show up for your flight right before the airplane door closes. If you have an early boarding group but you arrive as they’re boarding a later group, don’t be shy! Immediately step to the front of the line to scan your boarding pass. No one will think you are line cutting.

What is a “good” Southwest Seat?

The best seat on Southwest depends on your own personal needs.  Passengers with a connecting flight might need to sit in the front so they can deplane quicker.  Taller passengers might have their eye on an exit row seat. Larger groups and families with small children might want to snag seats together. Personally, I like an aisle seat- especially one with an empty middle seat next to it.

Find Out How Full the Flight is Before You Board

Sometimes, Southwest gate agents make an announcement whether the flight is full. If not, I’ll ask. It’s helpful to know whether I have a chance at my coveted aisle plus empty middle seat scenario. On a completely full Southwest flight, I’d opt for an aisle seat with the middle seat already occupied by someone I wouldn’t mind sitting next to. Similarly, it would be helpful for someone traveling with a lap child to know whether an empty middle seat might be available.

This is obviously not an exact science and can differ from person to person. Often, older travelers and those with connecting flights seem to choose the front of the plane.  Families typically head towards the back, where they hope to find seats together and maybe an empty middle seat for a lap child. My sweet spot on Southwest flights is from the middle of the plane to two-thirds of the way back. The reasoning is that the front middle seats will fill up quickly with people resigned to their middle seat predicament or eager to disembark. Also, people tend to pass up the middle section of the plane in hopes a random aisle or window seat can be found at the back. Once they are at the back, they will likely just grab any seat there since it is so difficult to turn around.

No one likes to spend any more money than they have to. For some passengers, this means resorting to “seat saving”.  It’s difficult to pinpoint what Southwest’s policy is on saving seats. It doesn’t seem to be uniformly enforced. Many people won’t necessarily mind if someone is saving a middle seat next to them for a traveling companion that is close behind. But in some instances, passengers take it to the extreme. I’ve witnessed one man board early and attempt to block off a number of seats (on a full flight) for multiple travel companions with a C group. The flight attendant intervened but that’s not always the case.

Much like the extreme seat-savers, some people think getting a seat on a plane is a no-holds barred type of thing. I’ve heard of passengers attempting to keep seats empty by pretending a nonexistent/imaginary travel companion is simply in the bathroom.  Not only is this dishonest but it’s also silly- what happens if they sit nearby and clearly no one returns from the bathroom? Conflict with fellow passengers is never a good thing.

On the less extreme end, sometimes two people traveling together try to block off a middle seat.  This is great for late boarders. If you spot one of these twosomes, make a beeline for their row and ask to sit in the middle. Most likely, they will offer up either their aisle or window seat.

Ultimately, a good seat on Southwest Airlines depends on your personal needs and preference. If you simply follow these easy strategies, you don’t have to stress over Southwest’s open seating policy or suffer through a bad flight.