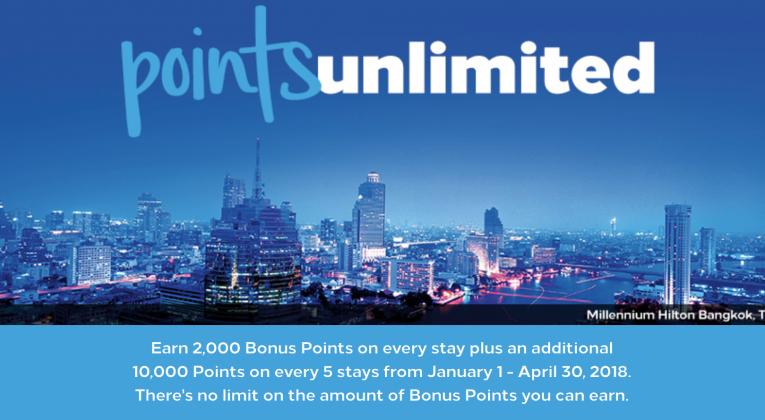 Hilton’s recent Honors promotions have mostly featured either double or triple points. Nice, but not a game-changer for many.

The new promotion, starting next month, is structured differently, but the bonus turns out to be pretty much the same.

Between January 1 and April 30, 2018, Hilton Honors members can earn 2,000 bonus points for every qualifying stay, plus an additional 10,000 points after every five stays.

There’s no limit to the number of bonus points that may be earned during the promotion period.

Honors members normally earn 10 base points for every dollar spent at most Hilton brands, plus an extra five points for those who choose to forego airline miles. So, 15 miles per dollar. Assuming a one-night $150 stay, that nets 2,250 points. In that scenario, the 2,000-point bonus falls just short of doubling the normal earnings. The multiple increases or decreases as the per-night spending rises or falls, but it will hover around the double-points mark—and more often less than more—for most members’ stays.

Double points may be just enough to keep Hilton loyalists from defecting to other brands. However, it won’t be enough to change the booking behavior of travelers whose allegiance lies elsewhere or who base their purchase decisions solely on value.

Factor in the extra 10,000 points after five stays, and the bonus is effectively 4,000 points per stay. That’s a more compelling proposition, but five stays is also a much higher hurdle.