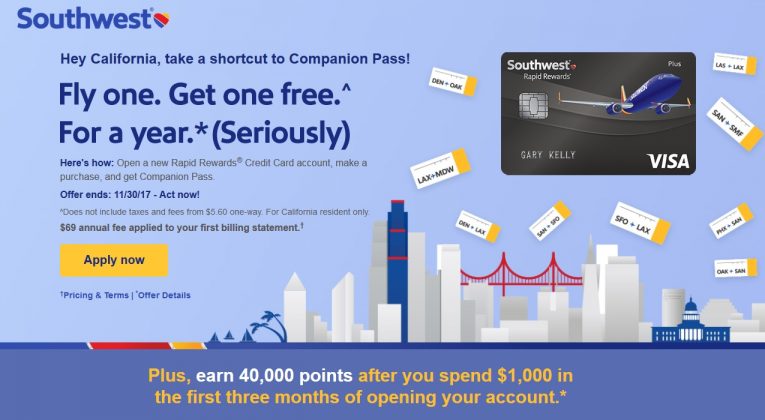 Wish you lived in California? You might, after reading about Southwest’s latest promotion.

The centerpiece of Southwest’s otherwise underwhelming Rapid Rewards program is the Companion Pass award, earned after accruing 110,000 points in a year. That’s a lot of points. But free flights for a companion are worth a lot.

Southwest has made the Companion Pass the centerpiece of a limited-time promotion–nominally a sign-up campaign for the co-branded Rapid Rewards credit cards, but more broadly an effort to secure the loyalty of California flyers, which is being tested by Alaska Airlines’ merger with Virgin America.

Through November 30, Rapid Rewards members who reside in California and sign up for new Rapid Rewards Credit Card accounts and use their new cards to make a purchase will earn a Companion Pass valid through December 31, 2018.

Related: This Is the New ‘Best Airline’ According to Savvy Travelers

In addition to the Companion Pass, new cardholders can earn 40,000 bonus points by spending $1,000 during the first three months.

Depending on how often you travel, and on what routes, a Companion Pass could easily be worth a thousand dollars or more.

Rapid Rewards points are worth 1.5 cents apiece when redeemed for Wanna Get Away fares, so the 40,000-point sign-up bonus is worth $600.

The combination of the Companion Pass and the bonus points makes this the most generous credit-card bonus in recent memory. It’s a pretty safe bet that you’ll never see a better offer for the Southwest cards.