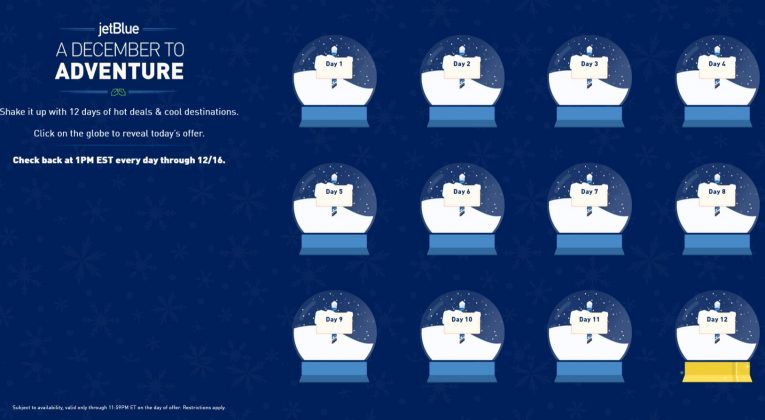 Recently, JetBlue announced that it would launch its 12-day “December to Adventure” promotion, with a different offering each day. So, would this be a real deal, or more a reflection Marriott’s “Members Get It” promotion, which didn’t get members much?

Well, at least they started off with a bang. The first day of December to Adventure gives you a shot at $20 fares (one-way, of course). Since the deals are changing daily, you don’t even get the usual two days that come with the usual JetBlue flash sale. Instead, you have until 11:59 pm EST to decide where you’re going to go and book the tickets. And it’s not just the short-hauls, either, with some long north-south and transcon routes added into the mix. My first look showed plenty of availability, although not necessarily on the day that you want to go, with the most seats on sale midweek. They’re heavy on the vacation destinations, so Orlando and Las Vegas appear prominently.

Explore select cities in the U S of A for just $20 one-way.

The conditions aren’t terrible. Because they control the timing, you don’t have to worry about blackout dates. They simply won’t make fares available if they don’t want to. Also, the fares are only for Blue fares, which means that you might still end up paying extra for your baggage. Still, the fares are so cheap that you can book it and, if you end up not using it, you’d be out as little as $40. Obviously, you’re not going to pay change fees, since there’s no reason to change the ticket. You might as well just drop it and book a second one.  Combine this with the cash back shopping deal that Melinda wrote about and you’ll have a very profitable, or at least inexpensive, holiday.