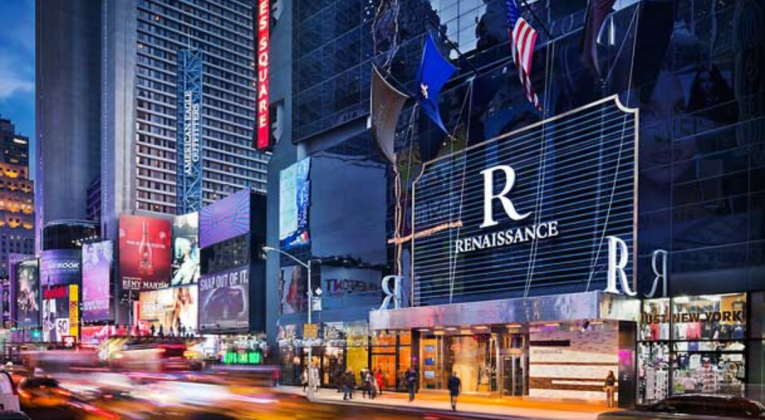 Located right in the heart of tourism central, the Renaissance Times Square is certainly named well. Visitors risk sensory overload, with the energy level being just below that of the Las Vegas Strip. It’s a pretty good tourist hotel, but business travelers might find more peace elsewhere.

I arrived at the hotel midday, after an hour-long trip from La Guardia. The hotel has the dreaded second-floor lobby, with the entrance on the ground and an elevator to the actual lobby. I had checked in on the phone, so all I had to do was stop by the front desk and pick up my keys. As a Gold member, I also received coupons for free appetizers at the hotel happy hour, which took place on the second floor.

Renaissance does not have a brand identity, so Marriott is emphasizing the “local hotel” concept. Each property is supposed to offer some sort of local flavor, which they tried to do in the lobby of this property. To their credit, they also had activities for guests, such as a cooking class, which I’m not used to seeing at New York hotels. Still, the whole thing felt a little bit hokey.

The room definitely had the New York flavor that I was used to: It was small and lacked outlets. There were two by the bed, but that was about it within reach. The bathroom was also small enough that the door blocked most of the photo.

The room had been renovated, but there were still some issues. The internet was not working for the first two hours of my stay. The television was fuzzy and the remote control came straight out of Pleasantville. Nothing serious, just enough to be annoying.

Room service is clearly on the way out in New York. There was none at the hotel and, unlike the Marriott East Side, where Seamless could provide door-to-door delivery, food had to be picked up on the ground level at the Renaissance Times Square. Sorry, no grabbing dinner in your pajamas.

It would have been nice to have working internet, but the crew at the hotel was, for the most part, friendly. My interactions with them were minimal.

Value was okay, not great. It was a disappointing room for $400 per night, but this is New York, of course. In the Big Apple, value is a relative term.

There was nothing particularly wrong with the hotel, but it wouldn’t be my first choice in the area, either. If you want to be in Times Square and you are able to get a decent rate, it’s probably not a bad option.