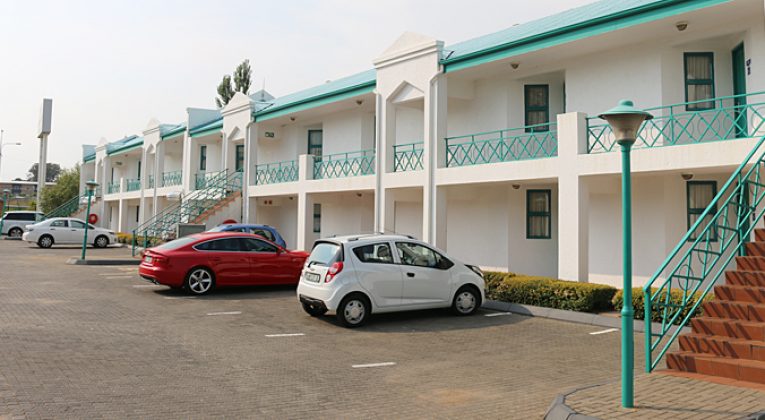 I drove a rental car for several hours from Mozambique — I had stayed at MozGuest Residence in Maputo — to South Africa; and I was tired. All I wanted to do was check in to a hotel; perhaps have something to eat; and then relax before going to sleep for the evening. I decided to stay at the Protea Hotel Samrand, as the price seemed right.

The Protea Hotel Samrand hotel property is located in Midrand approximately halfway between Johannesburg and Pretoria in a primarily industrial area which was not completely developed — there was unoccupied land interspersed with the surrounding buildings — not too far from the international airport which serves the greater Johannesburg metropolitan area nor too far from access the N1 electronic toll road.

I arrived at the very small “lobby” of the hotel to check in after driving for several hours from Mozambique; but the person at the front desk informed me that there was no record of my reservation — despite the fact that it was booked at the official Internet web site of Marriott and that I had received a confirmation of my reservation via e-mail message.

Try as they might, they had no record of my reservation; so they eventually had to create a new reservation for me. I was hoping that I would still be my earning Marriott Rewards frequent guest loyalty program points.

Once the new reservation was created, I was checked in; but due to not having a record of my reservation, the process of checking in was cumbersome, time-consuming and inconvenient.

Rooms are accessed by an exterior door, as there is no interior hallway in any of the several buildings on the property which comprise the hotel.

The Room — Which Led to the First of Three

I checked into the room assigned to me; and it seemed nice enough. The bed was clean and comfortable.

A small closet — more like an armoire — contained a safe and an extra pillow; and it also had a couple of cubbyholes to store items.

The desk — perhaps, more accurately, the workspace — was little more than a glorified counter which held a coffee station; a flat-screen television; and a telephone. However, there was plenty of space on which to work or to temporarily place belongings. I did not need to use an adapter to plug in my laptop computer, which was rather nice and convenient.

With the hotel located in an industrial park, the views from this room was not optimal — but it certainly could have been worse.

A nice spacious shower stall with a glass door and walls was part of the bathroom of the room.

Amenities in the bathroom included eartherapy shampoo, body wash, body lotion, a bar of soap, and a shower cap. There was also a small box of tissues.

Too Much Noise From Neighboring Guests

As nighttime arrived and I was preparing to go to sleep early as a result of being exhausted from driving, I started to hear lots of noise — and it went on for hours.

I was hoping that it would stop. I really was not in the mood to first change rooms.

After an abbreviated sleep overnight, the noise resumed early in the morning.

After having approached the front desk bleary-eyed, I was asked how was my stay.

“There was a lot of noise well into the night and early this morning from neighboring rooms,” I replied.

“Oh, that is probably from all of the kids who are staying here through the weekend.”

Well, they were not singing or creating music of any kind through their noise — I can assure you of that…

…but why in the world would anyone at the front desk assign a guest to a room near a bunch of noisy kids? Where is the logic in that?!? The whole point of staying at a hotel in the first place is to get some rest — right?

“I was planning on driving to Botswana; but I do not believe I had enough sleep to drive there safely,” I said.

One of the women behind the front desk apologized and asked if I could stay another night — this time for 500 rand.

My first thought was that if this happened at a Hampton Inn in the United States, my stay would have been free of charge due to the Hampton Inn Guarantee: “If you’re not satisfied, we don’t expect you to pay.”

As I have been reminded so many times during my trip, I have to remember that I am in Africa. Yes, I am.

I rarely invoke guarantees or attempt to receive compensation; but 500 rand is not much of a discount as compensation for my inconvenience. I did get them to include breakfast — on which they had to check with their supervisor before accepting the new terms. They were also going to assign to me a room as far away from the noise as possible, which in my opinion is what they should have done in the first place. Fine. I accepted.

The Second Room: No Record of Reservation and Ant Infestation

The new room was not ready yet for occupancy. Not a problem — I will just leave for a while and return to my new room. Unfortunately, I was stuck in traffic while I was out and returned to the hotel property with a different crew behind the front desk, who had no record of my new reservation nor of the room rate agreement which was reached earlier that day.

In other words, a new reservation needed to be assigned to me yet again; and they were going to charge me the going rate.

The woman behind the front desk went to get her manager, who came out and also knew nothing about the prior arrangement. He originally was not going to honor that arrangement — until I told the entire story to him…

…and I was starting to get aggravated. I wanted to sleep in a quiet room. Still, I remained patient and polite; and the deal of a room rate of 500 rand including breakfast was honored for that second night.

He started saying something about his staff not doing their jobs serving their guests properly and that he would let them know about that. The staff actually was quite nice to me and tried to be accommodating to me — I really did not want to see them get in trouble. It was not their fault that the reservation was not in the system, as the changeover to the Marriott Rewards frequent guest loyalty program only occurred approximately a week earlier. The technology probably was still not ready yet.

Anyway, I was given the key to the new room. It was indeed in a quiet area of the property. I opened the door and walked into the room — only to see a swarm of ants all over the desk area in front of the television.

“The room is infested with ants,” I said to the woman behind the front desk after trudging back from the hotel room. A look of incredulousness washed over her face before she “cut” me a new plastic key card for a room three doors down. A maintenance worker accompanied me to the new room to ensure that it was acceptable; and he visited the other room to confirm that it was indeed infested with ants.

I knew I was not crazy — at least, not pertaining to this situation.

The Third Room: Stains on the Bed Sheet

After getting situated in the third room assigned to me during my stay, I booted up the laptop computer — only to find that I could not access the Internet.

I once again trudged back to the front desk, where I was given a code for Internet access…

…and just as I was preparing to go to sleep, I whipped open the blanket and cover sheet — only to find stains in the bed sheet:

The next morning, I alerted the woman behind the front desk about the stains in the bed sheet. She offered nothing; but did hope that I had a good night’s sleep.

Here are photographs of the views from the third room to which I was assigned— as well as of the bed sheet itself on the bed.

When my bill was finally settled, I went into the restaurant to have breakfast.

The breakfast buffet was not good at all: canned fruit, fatty bacon, chewy breads and pastries; and in some areas, small flies were hovering over the food. Eggs can be prepared to my liking; but I chose not to do that. I ate a few items with some orange juice and got out of there quickly.

The orange juice and the hash brown potato circles were good, though; but not nearly worth paying 165 rand — or approximately $12.00 — extra for breakfast. Fortunately for me, a member of the staff of the hotel property reluctantly included breakfast as part of my room rate for the second night after all the trouble which I had been put through — and it still was not worth it.

At this time, I personally would not consider staying at the Protea Hotel Samrand again due to my experiences — and that is an absolute shame, as I would have been quite content with my stay: the bed was clean and comfortable; the shower was spacious, clean and modern; and the amenities were a nice touch. There is a private outdoor pool area with a small swimming pool if you need to take a dip.

Most of the members of the staff were nice — one of them was not particularly friendly — but they seemed like they did not know the operation of the hotel property as well as they should have known it. Service was good but far from the best I have ever experienced at a hotel property. Perhaps these two factors will improve over time.

There is no shuttle service to or from the international airport despite the hotel property being located not too far from the airport. There is convenient access to the N1 electronic toll road but no viable options of public transportation — so if you do not have a car available to you; if you do not like exterior access to your room; or if a view from your room is important to you, do not consider staying here.

Free access to the Internet is available to all guests; but at the time I stayed, I was limited to 500 megabytes — which really does not matter if you do not plan on downloading or uploading anything. The speed was ample for my purposes; but I had to log back onto the Wi-Fi system several times, which was irritating.

Both nights — including a “tourism levy” of ten percent on the room rate — cost me almost $100.00 total. Without the problems and flaws, this would have been a great deal.

External access only to rooms
No viable public transportation options
No shuttle service to or from the international airport
First room too noisy; second room infested with ants; third room had stained bed sheets
Food for breakfast was poor quality and not included in the room rate
Unstable access to the Internet, which otherwise would have been ample
No room has a good view