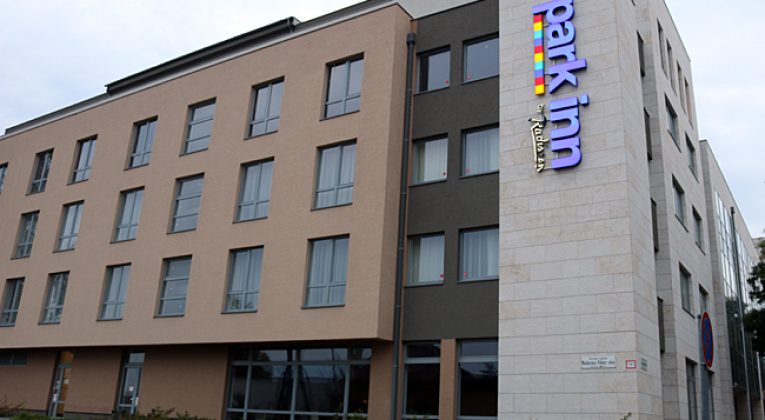 For the first night I was in Hungary, I stayed at the Park Inn by Radisson Budapest — a hotel property which opened approximately four years ago — using 9,000 Club Carlson frequent guest loyalty program points, which is why I paid seven dollars to top off my account during a “flash” sale back on Friday, June 27, 2014. This means that I essentially paid seven dollars for the night. It was well worth it.

The Park Inn by Radisson Budapest is still a Category 1 hotel property; and the redemption of Club Carlson frequent guest loyalty program points is still at 9,000 per night — meaning that you can easily earn enough points for a stay when you participate in promotions such as the Work Hard Play Hard promotion where you can earn double or triple Club Carlson points during your stays.

Here is a tip: if you stay at this hotel property, exchange your currency at the Tesco “mini-mall” just a block north. There is an exchange counter inside which had the best exchange rate I had seen in Budapest; and it was not crowded.

The main reason why is because this hotel property is strangely located in what seemed to be a mostly residential area several subway stops on the 3 line north of the city center; so it is not convenient to the tourist attractions and the bridges which cross the Danube River — despite this hotel property being a few blocks east of the river where it is not accessible to the river.

The location is reasonably quiet — unless a really noisy truck happens to pass by; or unless you hear a woman wearing shoes with high heels passing by. A bus filled with passengers all wanting to check in at the same time can increase the noise level as well.

The employees behind the front desk spoke English — one of them taught me to say thank you in Hungarian, which has delighted local people whenever I thanked them — and they were helpful with any questions I asked.

Overall, the room was spartan and functional with sporadic flourishes of design. The bed was reasonably comfortable.

There was a small table and chair which were so low to the floor, I thought that they were perhaps designed for children. The “desk” — more appropriately, a small work area — was attached to the wall with a small flat-screen television above it. Amongst the items placed on the work area was a telephone and all of the items you need for preparing coffee or tea — neither of which I drink…

…but if you like coffee and flavors of tea such as strawberry, rose hip and raspberry, and green tea citrus — as well as condiments such as honey and lemon juice — you are in luck.

The closet was functional, as it was equipped with shelves and a safe. The design of the closet was interesting in that the handles were cut out of the doors.

Functional and somewhat spartan in design — as with the rest of the room — there were three things I did not like about the bathroom.

First, a towel was placed draped over the basin and partially in the sink itself. I have never seen that before; but I automatically consider a towel in the sink to be dirty and tossed it off to the side. Fortunately, there were at least four other towels in the bathroom.

Second, what is with the partial shower enclosure? I dislike those with a passion, as avoiding turning a significant portion of the bathroom into a wet mess is virtually impossible without performing some acrobatics while showering. Why do a number of European hotel properties do that?!?

My most significant complaint about this hotel property is as I was already in the shower, I assumed that the dispenser had some of that liquid soap and shampoo; but only a squirt was left, which was not enough with which to do anything.

I did not feel like calling housekeeping to refill this; but it should have been checked. This happened to me at a hotel property in Munich, which is why I do not like these dispensers. Give me the packaged amenities any day.

…and although the views were nothing spectacular, they could have been worse.

I did not dine at either the restaurant or the Street Bar at the hotel property while I stayed there. I also did not use the fitness room — and there is no charge to use it. If you prefer to see Budapest by bicycle, you can rent one at the hotel property. There is an underground facility to park a car if you have one — and I did not drive while I was in Hungary.

If you are looking to be away from the tourists who concentrate around the center of Budapest, this is a good place to go where local people live and work. It is a clean, modern and sleek hotel property — but the room to which I was assigned was rather basic.

I would recommend staying at the Park Inn by Radisson Budapest hotel property if you do not mind being several subway stops from central Budapest — but only if the room rate is a bargain; or if you redeem 9,000 Club Carlson frequent guest loyalty program points per night. If you want to stay closer to central Budapest, consider the Courtyard by Marriott Budapest City Center.

Staying here is recommended only if the room rate is a bargain; or if you redeem 9,000 Club Carlson frequent guest loyalty program points per night.