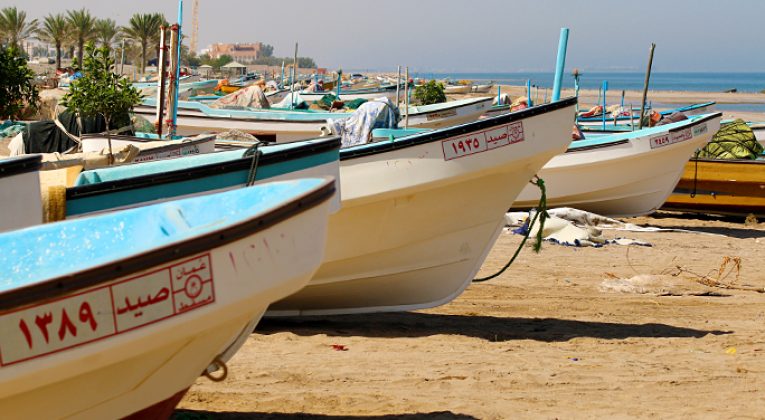 Wanting to spend some quiet time along the shore of Muscat in Oman, I drove to a street near the area of Azaiba — located roughly a quarter of the way to Old Muscat from the international airport, almost due north of the Sultan Qaboos Grand Mosque — called Street 37; and I parked the rental car on the street.

There was plenty of parking; very little traffic along the street; and few people milling about. The area was primarily residential; and with the busy main thoroughfare of 18 November Street several blocks away, there were local stores at which one can shop to purchase a drink if needed.

The first thing I noticed were arguably the strangest and goofiest streetlights I have ever seen. Who in the world came up with this bizarre design?

Although I would not exactly look forward to falling out of the sky for whatever reason, I would certainly not want to land on one of these streetlights — only to be certainly skewered by that inexplicably sharp point at the top of each streetlight which resembled an oversized rusting blue metal toothpick. Ouch.

A seagull wisely chose the assembly of the illuminated portion of the streetlight rather than the sharp pointy tip on which to rest. His brethren apparently followed the same practice over the years, as every streetlight sported white bird excrement.

Breaking away from my fascination with those streetlights, I walked along the corniche — or promenade, for lack of a better word — which was like a virtual ghost town, as no one was around save for a man wearing a traditional thobe.

He sat on a bench in one of the gazebos — two of which were clustered in these miniature plazas with floors of two colors of brick pavers which occasionally dotted Street 37 — and did absolutely nothing. It was almost as if he had nothing better to do that day.

The gazebos looked nice from afar; but a closer inspection revealed that elements of them suffered from apparent various stages of neglect: missing slats from benches; patches of rust from being near the Gulf of Oman; and other anomalies which seemed to scream out for attention to be repaired — sadly, with no one listening.

Those gazebos were not the only objects which need repair work.

Rusting structures with holes in their corrugated metal walls sat dormant in the warm February sun.

Boats lay dormant in a haphazard yet orderly pattern on the sand of the beach — some appearing not to have seen service in years, with motors attached to other vessels, covered in cloth, blankets, rags — apparently whatever material was found to be used — and some tied with rope; while other motors were exposed and unprotected from the elements.

With the palm trees standing in meticulous order as they lined the empty promenade in all their majesty, it was clear to me that this area — while certainly not a slum by any stretch of the imagination — was past its prime, which probably was not all that long ago.

A lone goal sits on the leveled sand with lights standing guard nearby, which suggested to me that games of football are — or were, at one time — popular at night.

The beach itself was not exactly the quality found in a resort area. Tire tracks in the sand was evidence of motor vehicles along the sandy yet rocky beach — some areas littered with patches of garbage — which did not appear inviting…

…but there was at least one new building which was under construction and had at least four stories — perhaps it will be a business or a home for someone one day — which gave hope for the future for this quiet area within the sprawling metropolitan area of Muscat.

I still have more articles with trip reports planned of my trip to Oman — including additional photographs of the Sultan Qaboos Grand Mosque, Old Muscat itself, Fort Nizwa and Wadi Shab — but this area was a refreshingly quiet break away from tourists, combined with a small glimpse of everyday life in Muscat. If you find yourself in Muscat and want a quiet place to relax with your thoughts, consider stopping by this area.

Parched from thirst, I stopped off at a small store while driving on my way back to 18 November Street and purchased an icy cold bottle of water. To say that it was clear that I was not a resident of this area was a significant understatement — and that was just fine by me in capturing a very small slice of some of the local way of life as I leisurely left the store with my refreshing bottle of water…