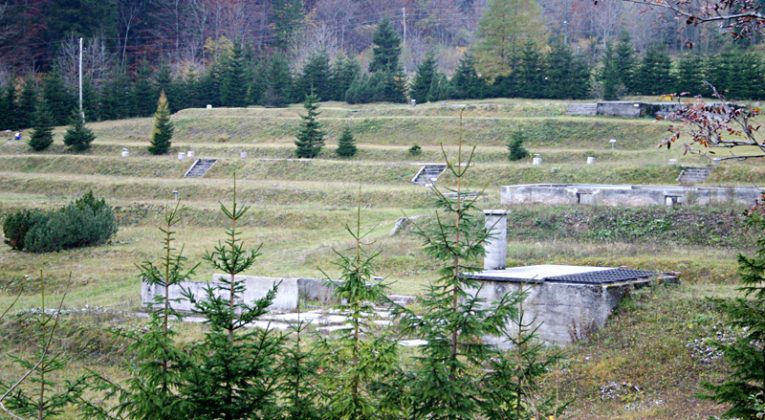 We had just crossed the border from Austria into Slovenia through the Karawanks Tunnel — named for the Karawanks mountain range of the Southern Limestone Alps through which cars can pass through — and as the sun was setting while we were winding our way down the curving mountain road through the Podljubelj municipality en route to Ljubljana, we suddenly noticed an unusual monument on the left side of the road approximately one mile south…

…but none of the five of us knew what it was; so we stopped to find out some information.

On a slab of stone, we found out that this place was once a concentration camp…

…and the words on the stone were “Here from 1943 to 1945 stood the section of the Nazi extermination camp Mauthausen Ljubelj in which political internees from France Poland the Soviet Union Czechoslovakia Belgium Luxemburg Italy Norvay and Yugoslavia suffered and died during the excavation of the Ljubelj Tunnel”, which is also known as the Loibl Pass — now somewhat obsolete since the opening of the Karawanks Tunnel on Saturday, June 1, 1991.

I could not believe the dichotomy of how an area so scenic and beautiful could also be a home to death and torture, as one can see what is left of the layout of the concentration camp amidst the picturesque mountains.

As all that basically remained was the layout of the concentration camp, there was not much to see…

…other than the natural beauty of the landscape as the sun set behind the mountains.

There was a statue which intrigued me; and written on the base is J’accuse — French for “I accuse.”

Sculpted by Boris Kobe — an architect, designer and painter who was born in Ljubljana — the purpose of the statue is to depict and convey the suffering of the approximately 1,800 prisoners at Mauthausen Ljubelj.

The public monument — dedicated to the internees, who built the tunnel under severe conditions — was erected in 1954.

The purpose of the tunnel was to give the Nazis an easier route southbound across the Karawanks mountain range to help further feed the unquenchable thirst for further conquest by Adolph Hitler.

Local people risked attempts to secretly feed — as well as pass along cigarettes — to the suffering prisoners.

This was not a typical concentration camp reserved primarily for people of the Jewish faith; but rather the majority of inmates were confined either for political reasons; for refusing to participate in forced labor; or were prisoners of war…

…but that did not render this place any less somber.

Strangely, the Koren Restaurant and Sport Center — which can also accommodate guests for the night, but I did not visit or stay there — is located literally next door to the former concentration camp with little else around — other than the mountainous terrain.

Mauthausen Ljubelj Nazi Extermination Camp in Slovenia is actually the first concentration camp I had ever visited — but only by mere days, as on the way back to Zurich, I visited Dachau and took plenty of photographs which required a second article.

Believe me when I say that Mauthausen Ljubelj Nazi Extermination Camp did not affect me nearly as significantly as Dachau; but that in no way means that the crimes committed at this place were any less heinous.

The short visit — we could not stay long, as my friends and I were meeting other friends in Ljubjana that evening for dinner — was an odd mix of somberness combined with the sheer beauty of the Alpine scenery.

Mauthausen Ljubelj Nazi Extermination Camp is located approximately one mile south of the border between Slovenia and Austria. If you are driving from that border, it will be on your left.

There is no admission fee.

Unless you want to admire the scenery, your visit should take no longer than one hour at the most.

All photographs ©2006 by Brian Cohen.