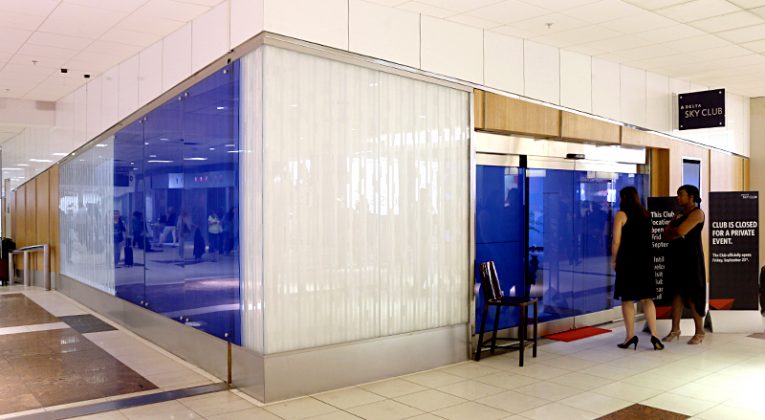 The new Delta Sky Club opens on Concourse B in Atlanta on Friday, September 23, 2016 — it is located near gate B18 adjacent to the food court near the main escalators — while the two existing smaller Sky Clubs will close permanently later today.

A ribbon cutting ceremony — which occurred on Tuesday, September 20, 2016 — to commemorate the opening of the new Sky Club was attended by greater than 600 guests, which included the media, select customers, dignitaries, celebrities and executives.

About the New Delta Sky Club

With 24,914 square feet in space and suspended over the tarmac by 455 tons of steel trusses, beams and cantilevers two stories above the main concourse level, this new Delta Sky Club at Concourse B is the second largest in the system, with the Sky Club at John F. Kennedy International Airport in New York being the largest. Its modern design features tiered ceilings bracketed by massive windows with expansive views of the airport and of downtown Atlanta — perfect for “planespotting” with views of the runways as well as the tarmac — with a chance to experience incredible sunrises and sunsets.

Because this new Sky Club is equipped with a kitchen, expanded food offerings locally sourced will include bagels, hard boiled eggs and yogurt with toppings for breakfast in the mornings; and soups, salads, fresh vegetables, crackers, dips, fruit and snacks throughout the day.

There is also a self-service “wine wall” stocked with premium bottles of wine available for purchase curated by Andrea Robinson, who is one of only 147 master sommeliers currently in the world.

This Sky Cub features artwork from seven galleries in Atlanta and other local artists which will be on a rotating exhibit at least three times per year as part of a curated art program showcasing inspiring work from emerging artists and local galleries; and there is also a mural by Cuban-born artist Alexi Torres.

The city of Atlanta will reimburse Delta Air Lines with as much as 24 million dollars towards the cost of building this new Sky Club.

The latest iteration of the Delta Sky Club cuts back on the recent ultra-modern white decor and incorporates more color and materials — as well as a variety of more practical and comfortable furniture than its predecessors — which has the lounge experience approach the level of world-class. The expanded food and beverage offerings ensure that you do not leave the Sky Club dissatisfied.

You will not find an outdoor space similar to the Sky Deck located at the Sky Club on Concourse F nor will you find shower facilities, as this Sky Club is located on Concourse B and is not used by passengers of long-haul flights.

That this Sky Club can seat 500 people significantly reduces the chance of overcrowding which was experienced by the two smaller Sky Clubs located on Concourse B.

Most notably, there are literally hundreds of power outlets — both electrical and USB — so wherever you sit, you can be assured that you are never too far away from one to power your portable electronic devices so that you can listen to music or work…

…assuming that you are not too distracted by the incredible views provided by the expansive windows surrounding much of this Sky Club, which could have you staring outside for hours — day or night.