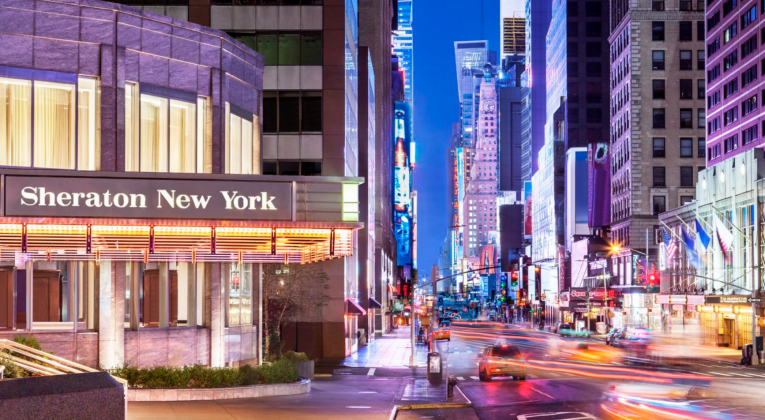 Every hotel stay involves tradeoffs. A city hotel with a great location gets you all of the advantages of geography, but it also comes with a big drawback. Namely, everybody else wants that geography, too. Such was my experience at the Sheraton New York Times Square.

Describing the lobby as a mob scene would be an unfair comparison. To mob scenes. Given this hotel’s popularity and conference facilities, it often runs at 100% occupancy, despite the fact that it simply isn’t equipped to do so. Lines for check-in were long, although my agent was extremely friendly and doing the best she could. Our room wasn’t ready, but we knew that going in. They took our credit card info so that we didn’t need to do a full check-in later.

If you’re staying here, it’s because you have business nearby or want access to Times Square. And the hotel doesn’t disappoint, with Times Square only a few blocks away. There were also multiple entrances to the hotel, meaning we could sneak out the back and avoid the crowds.

We paid up (in points) for a suite for our family of four. Suites typically cost double the number of points that a standard room does.

We were not disappointed with most aspects of the room. It was a decent size, had a chaise lounge to the side and a reasonably sized bathroom and living room. As part of its most recent renovation, the hotel had also added outlets everywhere. Charging multiple devices at the same time was not a problem. Internet speed was generally good.

Some aspects, however, did not reflect the standards of an upscale hotel. Despite being a two-room suite, the HVAC only had one zone. It was impossible to have one room cold and one hot. But the biggest complaint I had was the same one that has always been a problem: The walls are too thin. I could hear every word my neighbors said, and they weren’t screaming.

This is the area where the size of the hotel played the biggest role. It started with the elevators, which now have a touch pad at the base of the elevators. You push the button for your floor and it tells you which elevator it would go to. It is poorly signed, however, and guests were constantly stepping into the elevator and looking for buttons before realizing that there were none. This type of call system is particularly tough at a hotel, where one guest with a lot of luggage can tie up an entire elevator. The elevator doesn’t know that, however, and will still program multiple stops.

It didn’t end once you got to your room. We had a problem with our air conditioning and the requested engineer took three hours to show up. A call to the front desk for a late check-out led to a ten minute hold time while waiting for a representative. You get the point.

The hotel had the typical restaurant, gym, etc. that you would expect in a large, city property, but those perks weren’t always free. My favorite is was the $5 per bag that the outsourced service charged to check your luggage (although it is complimentary if you are storing bags because your room wasn’t ready). Nothing except the price, which used to be $3 per bag, is new about this “convenience.”

Generally good. We paid for the room with points, but a quick glance at the prices on the SPG website shows that the Sheraton New York Times Square is usually one of the cheaper hotels in Manhattan.

The hotel is priced right for the experience.

Great location, good value. The hotel had all the amenities that you'd expect from a city property.

The hotel is massive and often runs at 100% occupancy. It doesn't have the staff or the space to manage crowds of this size.

If location and price are the most important factors to you, the Sheraton Times Square New York probably gets the job done. If you want luxury service levels, the Four Seasons is on the east side.