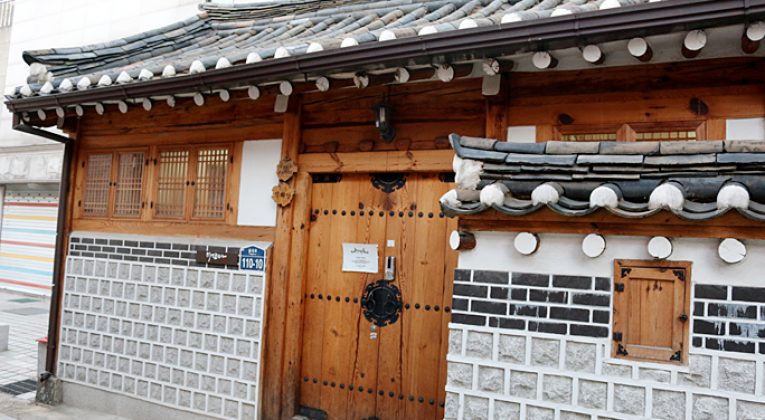 If you are heading to Seoul and do not want to pay what seems to be a high cost when it comes to lodging, you could consider staying in a hostel or a no-name hotel where you have no idea what your experience will be like…

After conducting some research, I chose Yoo’s Family Guest House Byeolhadang. At that time, it had the best combination of everything for which I was searching — including location and price. It is located only a few blocks from two different subway stations serving three different Seoul Metropolitan Subway lines; and it is also located within walking distance of several palaces and shrines.

Yoo’s Family Guest House Byeolhadang is not located in the central area of the historic Bukchon Hanok Village; but rather several blocks east of it — and it is adjacent to some modern buildings, which was interesting to see the old and the new juxtaposed in the same line of sight.

I walked off of Yulgok-ro — a busy street — onto this little “street” of green and pink interlocking cinder blocks; and to my right was my destination. It was initially difficult to see if I had actually arrived at the right address at first glance.

Yep — this is the right place!

The room which was assigned to me is known as the Room of Love. I first removed my shoes and left them outside before I entered the room, which is customary in South Korea; and I always remove my shoes before I enter my home anyway, so this was natural to me.

It is only one room; and guests sleep on a mat on the floor.

The room was equipped with an air conditioner near the ceiling, as partially shown in the above photograph; and there were items in the storage area on the wall for guests to use — such as a blow dryer for hair, for example.

I was tired and the room was somewhat dark for additional photographs despite the lights; and I did not want to use the flash on my camera; so I decided to call it a night and resume taking pictures the next morning once I woke up.

I slept well through the night, as the mat and linens were fairly comfortable; although not as comfortable as an actual bed — unless you prefer a really hard mattress. I was awakened by the light coming in through the entrance to the room, which was just fine with me.

The room was equipped with an electric coffee pot. I liked the wallpaper and some of the items which decorated the room. Wi-Fi to access the Internet is available and included in the room rate; but I did not use it.

The “closet” of this room consisted of no more than a small wooden rack mounted on the wall with three wire hangers, as shown in the photograph below.

The small bathroom — shared amongst the guests of all of the rooms — contained a toilet, a sink and a shower with no solid divider. As a result, the floor was constantly wet by the toilet from the shower; so unless you want wet feet, you must wear your shoes in the bathroom area. I did not take any photographs of the bathroom, as it was too small and too wet to bother. I personally did not like the bathroom.

I decided to walk across the small courtyard to get something to eat, as breakfast is included in the room rate — but this hanok has no restaurant; and that was just fine with me.

Instead of a restaurant, there is a combination kitchen and dining area in which there are no chairs. Rather, there are pads on the floor on which you can sit or kneel.

The flat-screen television in the kitchen was on, with a morning show pertaining to fashion — all in Korean. I eventually turned it off with the remote control which was on the table.

Available for breakfast was two types of dry cereal, bread, and cups of dried noodles.

In addition to the television and a toaster, the kitchen is equipped with a small refrigerator containing assorted fruit juices, water, milk and other items; a microwave oven; a sink; and a stovetop for cooking.

…so I poured some hot water from an electric pot into a cup of noodles and had that for breakfast with a few boxes of juice. Because I used disposable chopsticks with which to eat my Korean soup from its cup, all I needed to do was dispose of the items — no washing dishes for me!

Clothes and linens were drying in the small courtyard, which was quiet and peaceful.

It was interesting to see the modern architecture of a tall building from the courtyard of a traditional hanok.

After I checked out of the hanok, I asked if I could leave my bag for several hours while I visited the palaces located nearby, which they replied affirmatively. I have to say that the staff at this hanok was friendly, welcoming, and very accommodating.

Based on my experience, if I had my choice between a stay in a hanok and a ryokan in Japan, I would have preferred the ryokan, where the bedding was still on the floor — but it was prepared for me; the room was larger; and the bedding was more comfortable overall. This is not meant to be a criticism against Yoo’s Family Guest House Byeolhadang, but rather a general observation. I suppose that different hanoks and ryokans can prove that statement false; but again, it is simply based on my experience.

I spent a total of $73.74 paid in advance through Expedia.com — including all taxes and fees — which roughly matches the room rate of 60,000 South Korean won for the room plus the fee of 20,000 won for the bedding per person.

Room is small with limited space and no closet
There is only one small room with a shower, toilet and sink which is shared amongst all guests
Shared washroom is not well maintained: for example, the floor was wet, so you must wear your shoes
Limited selection of items for breakfast
Not located near the center of the city or airports

If you find yourself in Seoul and want to stay in a traditional hanok for a change of pace instead of a typical hotel, I definitely recommend Yoo’s Family Guest House Byeolhadang — but this experience is not for everyone, as service and facilities are limited.