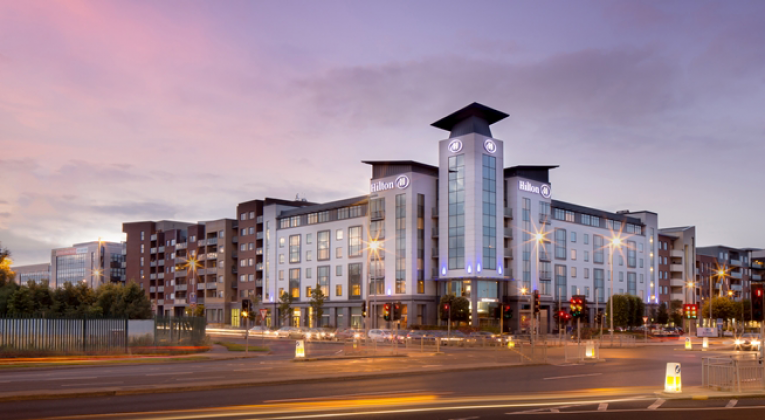 I was in Dublin for a meeting; and when I reviewed my lodging options, I decided upon the Hilton Dublin Airport as the hotel property at which to stay.

Hilton Dublin Airport is located on Malahide Road in Northern Cross, which is not far from Dublin Airport; but it is not exactly close to it either.

My stay did not start off well: even though the airplane operated by Ryanair on which I was a passenger arrived approximately 20 minutes ahead of its original scheduled time of 23:40, I still was unable to catch the airport shuttle bus to the hotel, as the last pick-up scheduled from Zone 14 at the airport was at 23:40. The gates which serve Ryanair flights at Dublin Airport seem to be in their own county, as it felt like the walk was at least one kilometer — and then I still had to go through passport control.

There I was standing out in the cold, wet rain staring at the shuttle buses of other hotel properties still collecting and transporting their guests.

I went inside and told the person behind the information desk of my dilemma. She told me where the hotel courtesy telephones were located. When I tried to use the one for Hilton Dublin Airport, all it did was beep as though it was out of service. The person behind the information desk called the hotel property. After telling them of my situation, a special shuttle bus pick-up was scheduled — and we are now at the part of this trip at the beginning of this article where I was in that shuttle bus, thankful to be on my way to the hotel property.

When I arrived and was checked in, I was given two cold bottles of water and a coupon good for two free drinks in the bar. Because I am an elite member of the Hilton HHonors frequent guest loyalty program, I also was informed that breakfast is included in the restaurant, as there is no executive lounge. The person who checked me in was apologetic and would have probably done almost anything I requested.

By this time, it was well after midnight; so I retired to my room and worked on an article before “crashing” for the night. The Internet Wi-Fi connection — which was also included — performed well; but the connection would drop every time a device would fall into “sleep” mode. Logging onto the Wi-Fi connection only took seconds of my time; but to have to keep doing it was a minor irritation at best.

The twin bed — there were two of them in the room — was rather comfortable. There was a flat-screen television on the dresser. The work area had a desk with a mirror, the aforementioned electrical outlets, a telephone, a desk lamp, cubbyholes, and a drawer. Closet space — which included a safe — was generous.

The bathroom was equipped with such items as a telephone and magnifying mirror; and it featured amenities from Peter Thomas Roth, which included shampoo, conditioner, hand cream, “deluxe” shower cap, soap — and body wash filled with microbeads. I would not be surprised if the body wash was replaced with one which does not contain microbeads by the time you stay as a guest at this hotel property.

At least the shower area had a curtain on a rod which curved outwards similar to those found in the bathrooms of hotel rooms in the United States — which meant no watery mess like those irritating partial shower partitions I kept finding in Budapest.

…and that is not the complete list of items found at the buffet in the morning.

I am not much of a breakfast person — but this breakfast filled me up every morning.

Getting to the center of Dublin was rather easy by public transportation, as there is a bus stop at the Tesco supermarket diagonally across the intersection of streets near the front of the hotel. For 2.60 euros, the bus — all of which are double-decker — on route 15 will take you there in approximately 30 minutes. Other bus routes will take you towards the center of Dublin as well.

If you rent a car, the M1 autoroute — which you can take south towards Dublin or north towards Belfast — is several minutes away. The car park at the hotel property will cost you five euros per day.

The views from the room will not exactly win any awards.

I apologize for not having more photographs available; but the room was not exactly presentable by the time I was able to take pictures.

I spent three nights at this hotel property, for which I paid 59.63 euros per night for a total of 178.89 euros in total — paid in advance.

My main complaints about this hotel property is that the Wi-Fi Internet service should be more stable in terms of keeping devices logged in; and that the schedule for the shuttle service really needs to be more flexible — including adding an extra shuttle or two late at night, and perhaps increasing the frequency at some times where the shuttle service is every 45 minutes.

Also, there is a cost of two euros for the return shuttle bus service back to the airport — even though the service from the airport to the hotel property is complimentary. I personally believe that this charge is rather petty.

I also did not appreciate a charge of one euro for a donation to the Hilton Foundation, which was automatically added to my statement.

My stay at the Hilton Dublin Airport was very good; but would have been great if the aforementioned issues were properly addressed.

Source of the photograph at the top of this article: Hilton Dublin Airport; otherwise, all other photographs ©2014 by Brian Cohen.

Buffet breakfast, which is included for guests with elite level status
Bus service on several routes into Dublin is a seven minute walk away
Motorway is nearby
Room rate is reasonable compared to those at other hotel properties
Adapter is not needed for electronic devices for guests from the United States

The airport is not far; but also is not close to the hotel property
An increase in the shuttle service schedule to and from the airport is needed — especially for an airport hotel property
The airport shuttle service needs to be more flexible
A charge of two euros for the shuttle bus service back to the airport was levied when I stayed there as a guest
Wi-Fi Internet service not stable enough to keep devices logged in — although this may have been addressed since I stayed there as a guest

I would recommend staying at the Hilton Dublin Airport if you want a lodging option which is at a lower cost than comparable options closer to or within Dublin — especially if you do not mind traveling to central Dublin using the varied options of transportation located near the hotel property.