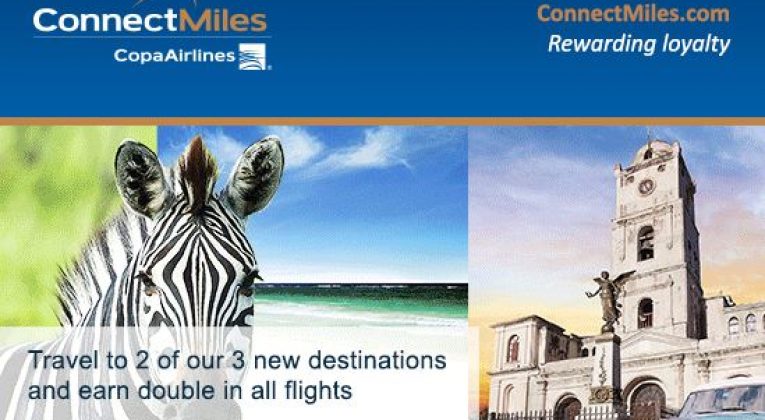 Panama-based carrier Copa Airlines is offering Double ConnectMiles for all flights from September 15-October 31 if you are willing to check out a couple of their new destinations. But hurry, because you’ll need to complete those qualifying flights by August 31.

ConnectMiles is the name for Copa’s frequent flyer program. Copa established the program last year, after breaking with MileagePlus. Note that Copa is still a Star Alliance carrier and operates similar to (the old) MileagePlus. Unlike MileagePlus 2.0, however, Copa’s program still awards miles based on flight distance. The award chart isn’t great, but the airline offers frequent promotions. There is usually a sign-up bonus for the program. The current one is 1,000 miles.

If your travel takes you to one of the above cities in the near future, you’ll want to register for Copa’s current promotion. Fly to two of these three destinations before the end of August and you’ll earn double miles on any Copa flights between September 15 and October 31. While the promotion’s benefits qualifications limit who can benefit, for those who fly to the region frequently, you can pick up some serious bonus ConnectMiles. You’ll earn one mile per dollar spent, plus a class of service bonus. The promotion doesn’t reference the class bonus, but it is likely excluded from doubling.

If you’re flying on Copa but your destination is not Panama, you’ll likely have to change planes there. But that’s not necessarily a bad thing. The airport is an outstanding connecting hub. There are six banks of flights, increasing frequency. PTY is at sea-level and the weather is beautiful year round, so cancellations are rare. And you don’t have to clear customs or immigration if you are connecting.

To call Copa’s website a disaster is an insult to true disasters. The site is slow and has had a warning about lags almost since the day ConnectMiles was launched. Promotions are often poorly explained. Links frequently lead to 404 errors (I got one today when trying to find a contact phone number.). Be prepared.

The double ConnectMiles is somewhat limited in terms of who will be using it, but it can really help you rack up the miles if you qualify. Copa runs frequent promotions, so it’s worth keeping an eye on. And if you haven’t yet signed up for ConnectMiles, they’ll give you 1,000 to do so.