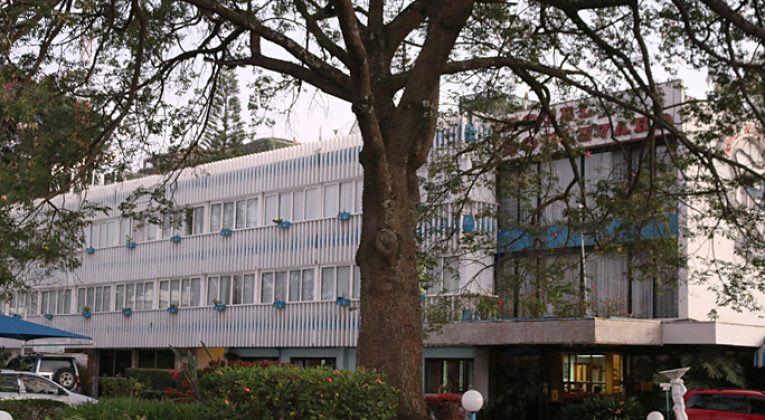 The only reason why I booked a room at the Sentrim Boulevard Hotel in Nairobi was because that is where everyone participating in the safari on which I was booked was meeting early in the morning. It certainly was not because it looked appealing by any sense of the imagination.

Fortunately — although one night at the Sentrim Boulevard Hotel would have cost me $98.55, which was the least expensive room rate I could find which included all taxes and fees — I was able to reserve the room at absolutely no cost because I used Orbucks to pay for my reservation. Even for free, the price was not worth staying at this dated, run-down hotel property.

The Sentrim Boulevard Hotel is located just northwest of central Nairobi near the Nairobi River and a couple of highways.

I arrived at night by taxi cab from the airport. I was welcomed by the agent behind the front desk in the lobby of the hotel; and he gave me a remote control for the television when I was given a key to my room. I had never seen anything like that before.

I walked down a creepy hallway to get to my room before entering it.

The room had no air conditioning unit at all; which meant that if I wanted fresh air, I would have to open a window — but then that would allow mosquitoes to enter the room. An oscillating fan attached to the wall was all there was to keep the room cool.

The flat-screen television on the wall could not have been much larger than the screen on my laptop computer.

I hung my clothes on the hook in the wall instead of in the “closet” in an attempt to minimize any invasion of cockroaches in my clothes while I showered. You will know what I mean when you read on…

There were a couple of small bars of soap and a tube of a combination shampoo and body wash as amenities set up at the vanity in this dark and dingy bathroom.

While in the bathroom, I saw something scurrying out of the corner of my eye. It was a cockroach.

Fortunately, I did not see any more cockroaches while I was there; but there are usually more hidden when one is visible. Switching my room would not have helped matters, I thought to myself; so I decided to leave all of the lights on and sleep in my clothes on top of the mattress. I was only going to be there for several hours anyway before the meeting time to embark on the safari.

The shower was probably the nicest part of the entire hotel room — but that is not saying much. There were many places were the wall met the ceiling in the shower that would be ripe for critters to enter. I kept an eye peeled as I showered.

I obviously did not sleep very well; so I decided to look at what was being offered for breakfast, which was included in the hotel room rate.

Needless to say that between the cockroach with the possibility of more of them; the numerous flies buzzing around; and what appeared to be poor quality food, I decided to forego breakfast.

The decor of the hotel lobby spurred my imagination back to the 1930s and 1940s. There was even a place where keys were once stored behind the front desk.

The security gate looked more like an entrance to a prison than to a hotel property.

The exterior of the hotel property appeared rather worn and dated.

There were also places to sit or lie down and relax at or near the swimming pool. I thought the outside area had potential, actually.

Stated here is that “the management and staff is committed to making your stay as comfortable and memorable as possible. At the Boulevard you can expect 5 star service and quality at an affordable price.”

Although members of the staff are generally welcoming and nice, do not count on a five-star experience. This hotel property needs some serious updates for that to happen.

The Sentrim Boulevard Hotel — a part of the small Sentrim chain of hotel properties — is located on nice grounds with woods at the rear of the property. The right investments — restoring some of the old charm and giving it some modernization while ridding the unwanted vermin — could go a long way towards greatly improving this hotel property.

Roach problem
Dark and dingy room
Food not appetizing at all, with flies buzzing all around it
Swimming pool was unusable
Much of the hotel property is dated and sorely needs an update

Although the staff is welcoming and nice, do not count on a five-star experience. This hotel property is not worth the room rate of $98.55, as it needs some serious updates for that to happen. There are better lodging options in Nairobi — even if you have to pay more money per night for those other options. I do not recommend staying at this hotel property.