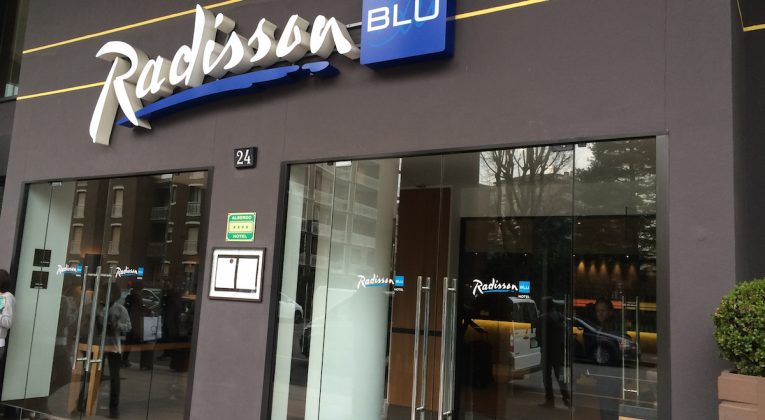 I spent 4 nights in Milan in 2014 thanks to the Wideroe “mistake” fare; $201 round-trip from New York to Milan with a stopover in Zurich. My first two nights in Milan I stayed at the Radisson Blu Milan. I choose the Radisson Blu Milan because as a Radisson credit card holder, the second night of an award stay was free. So instead of paying 88,000 points for two nights, I paid 44,000 points.

The Radisson Blu Milan is 20 minutes via public transportation from the city center. The hotel has 250 rooms and suites and caters more to business travelers vs vacationers. There are no tourist attractions in the immediate area. But the train station is about a 5 minute walk and there’s a tram stop 1 minute away.

Check-in wasn’t as smooth and friendly a process as it could have been. The desk clerk let me know his contempt because I was using points instead of cash. Nor was he happy that I didn’t speak Italian and choose not to pay an an uncharge to add breakfast to my room.

I booked a standard award – deluxe room. My room had a view of the busy street. As a plus I quickly figured out the tram schedule by watching the traffic. 🙂

The bed was very a bit harder than I like. But I prefer a soft yet firm bed. And the sheets were a bit stiff, probably too much starch.

There was a TV across the room, mini-bar, desk, a chair, ottoman, and a side table. It was simple room, perfect for a business traveler. But not for someone on vacation who wants to spend time in their room.

The bathroom was built for one person. The single sink offered some “counter” room on either side. In addition to the toilet, there was a bidet.

The shower had a mounted movable shower head that could be adjusted up or down. A handheld shower head was attached on the side wall. And at the far end of the shower, towels were hung over a towel warmer. This was a nice touch and since I visited during the winter, enjoyed drying off with a warm towel.

The water pressure and temperature were just okay.

The leather chair was the best spot to watch TV, if you didn’t want to sit on your bed.

As a Club Carlson Gold or Concierge, you’re supposed to get an upgrade (if available). But when checking in, I asked about an upgrade but was told the hotel was completely sold out and no rooms were available. However, there were plenty of rooms available including a Business Class room which is a standard upgrade for a Gold member. Nor did I receive my amenity. 🙁

Radisson’s Twitter team was quick to respond and righted the situation. But the hotel failed to move me to another room. Instead they delivered a fruit basket as my amenity.

The Radisson Blu Milan has an onsite restaurant, bar, gym, pool, sauna and steam room. I didn’t use any of the facilities during my stay.

The cash rate for a Deluxe room in the winter is $142 a night. The Radisson Blu Milan is a Category 5 hotel so free nights are 44,000 points a night.

The location is in a business district. You have to take the train or tram to the city center so it wouldn’t be my first choice for a hotel in Milan. Unless I had Radisson points to burn or need a Radisson stay.

The Radisson Blu Milan is the only Radisson in Milan but it's far from the tourist sites. Great if you want to be away from the crowds, but the extra time to get back and forth might not be worth it.