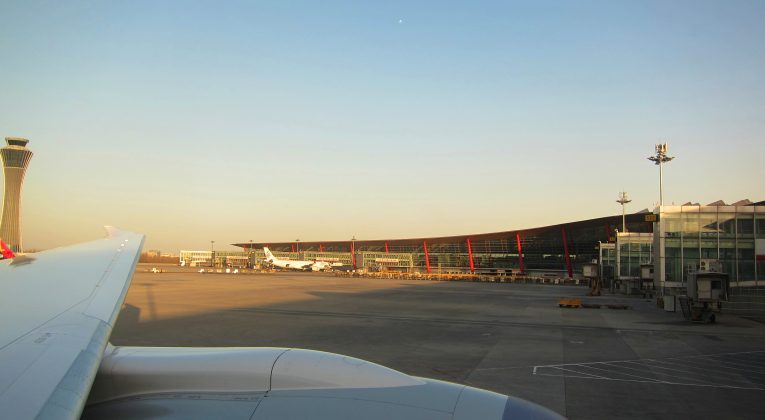 Revenue tickets from the United States to China are often on sale and upgrade space is usually plentiful. I’ve done a handful of mileage runs to China over the years, from a one to three night stay on a regular fare, to a one night stay during American’s $450 business class fare to China in 2015 (would’ve been a two nighter, had we not been delayed 16hrs!). On this particular trip, my work schedule and the fare wouldn’t allow for an overnight, so I decided to try something new. I booked a ticket from Chicago to Beijing, via Dallas, with just under three hours on the ground in Beijing. Though I hold a 10 year Chinese visa, my thought was that I could just use the transit checkpoint and have plenty of time before my next flight.

Before leaving Dallas, I was able to pick up a copy of the boarding pass for the flight from Beijing to Dallas. I also had the agent print a copy of the trip itinerary, just in case the Chinese authorities needed additional proof when going through the transit checkpoint. While I would normally have the return boarding pass printed in Beijing, American was unclear when I asked if they had a transit counter or anybody who could issue boarding passes airside, rather than requiring me to go landside and potentially miss the flight.

The flight to Beijing was as you might expect for a segment in American’s business class cabin. Unlike previous trips, these flights were operated by the Boeing 787-8 Dreamliner, offering lie-flat seats in the premium cabin. I spent most of the flight working, thanks to the satellite wi-fi connection, operated by T-Mobile. The “duration of flight pass”, which I expected to work for just one of the flight, worked for the first flight and all but five hours of the return. For $19, I’d consider that a great deal for internet access on a metal composite tube flying at 35,000 feet 🙂

In Beijing, I followed signs for transfers when I spotted an airline counter containing branding for just under thirty different airline. To my surprise, American was listed as a supported airline! So much for news from American that they didn’t offer any airside ticketing assistance!

To confirm that the agent working the counter could issue a boarding pass, I requested a re-print of my boarding pass for the flight to Dallas. It took about ten minutes, primarily due to the agent having to switch computers a few times, but in the end, I had a boarding pass printed for the return flight. They were even able to print the boarding passes for my flights to Kansas City. I was then directed towards the temperature check (standard for all arrivals) and noticed signs for transiting passengers.

The stanchion maze led to a small checkpoint staffed by two airport employees listening to music on their cellphones. My passport and boarding pass were given a quick glance and then I was directed to a pair of escalators behind the transit counter. So far, this seemed like an easy process! I even decided to set my iPhone counter, though it seemed unnecessary. That was until I got to the bottom of the escalator and saw the security lines.

Numerous airport agents were running around the checkpoint, shouting what I assume were directions to passengers, though

everything was in Chinese. With what looked like more than three hundred in line for the open screening lines, it was certainly not a quick process. During my last visit to Beijing, in April 2015, a priority line existed for premium passengers. Unfortunately due to the amount of passengers waiting to go through, it was impossible to locate the line.

Once I reached the security desk, my boarding pass and passport were checked once again and I waited in a second line for the metal detector. At this point, many passengers were freaking out, worried about missing their flights. I only waited another ten minutes before reaching the metal detector, though everybody in line (including me) ended up having security agents digging through the bags. With four passengers in front of me, it was a slow process.

Though I originally had two and a half hours to connect, the transit process took long enough that I only had fifteen minutes to visit the Cathay Pacific lounge before proceeding to the gate to board the flight home.

If you are brave enough to book a flight that requires you to connect in Beijing, I would recommend having at least three hours between flights. I would also suggest that you try to acquire your connecting boarding pass at the point of origin. Thanks to an “AAngel” in the American Airlines Admirals Club in Dallas, I was able to pickup the return boarding pass. Though I later found out that American offered support at the transit counter, there is no way I would have made the return flight if I had been required to go landside. If you’ve been to the Beijing airport, you’ll know how big the place is. By the time you clear customs, ride the train to the main terminal, check-in, ride back and deal with customs and security formalities, it would eat up a short layover.