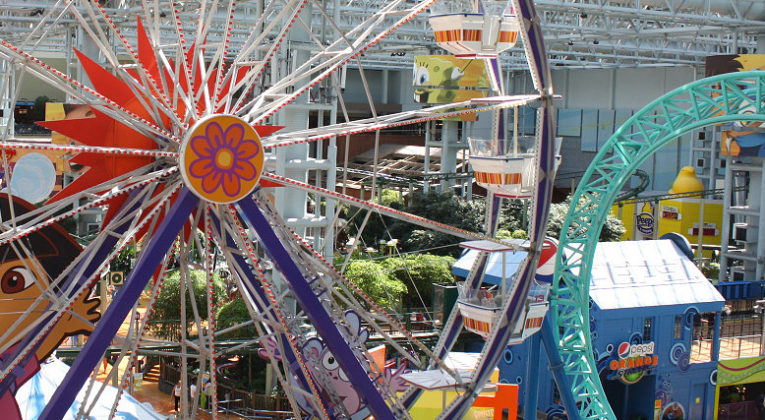 Visiting the upper midwest for some time, or got a long layover to kill in Minneapolis? Traveling with kids, or simply a kid at heart? Consider a stop at Nickelodeon Universe, the indoor amusement park at the Mall of America. Formerly known as Camp Snoopy, Nickelodeon Universe has 27 rides and a bunch of other attractions to keep you busy for hours.

For a theme park that has to fit inside a shopping mall, even one of the largest in the world, Nickelodeon Universe does a great job of appealing to a wide variety of customers. The older folks can entertain themselves with roller coasters, spinning rides and others that will cause fear and/or nausea, while the little ones can hang out at such locations as the Barnyard Hayride or Diego’s Rescue Rider.

Insider Hint: There are four entrances throughout the park and the south entrance has a giant Lego play area and store so, if you are coming in with a seven year old boy, you may want to enter from the north.

For those of you who are big on roller coasters, there isn’t enough space to challenge the biggest in the world, but there are still plenty to make your stomach drop. While there are several traditional coasters, you will also find rides such as The Brain Surge, The Fairly Odd Coaster (with cars that spin as you navigate the drops) and the new TMNT Shell Shock. But the nice side to everything being in such a condensed area is that, if somebody didn’t like the looks of a particular ride, there was likely a suitable one only ten or twenty yards away.

There are also bumper cars, a traditional carousel and a mix of other rides, all themed with Nickelodeon characters. In fact, I  hope you are a SpongeBob or Dora fan, because it’s impossible to escape the network’s “representatives.” Hey, if it helps to offset the ticket price, I’m willing to deal with the advertising. Speaking of which…

It’s actually not that expensive. All the rides have a point value, either three points for the junior rides or six points for the ones that will make you sick. And while the rides may look expensive, the more cost effective way to do it is to buy an all-day pass, which gives you unlimited access to Nickelodeon Universe for $34.99. The only reason you wouldn’t do that is if you had several people who only wanted to go on a few rides, making a wristband for each expensive.

Insider Hint: Don’t wait in the ridiculous lines at the single ticket booth. Instead, get your passes from one of the many kiosks scattered around the park.

The park also has the usual mix of carny games, Skee-Ball and food options to separate you from your wallet. Don’t worry, your kids will help take advantage of every opportunity to bankrupt you. But because you are in the mall, there are also plenty or restaurants or stores to distract you if you need a break.

The rides are staffed by the usual bored teenagers and tend to have one fewer person operating them than they actually need to keep things moving quickly. Disney World, this ain’t, and an efficiency expert could probably improve throughput by about 30% without breaking a sweat. But if you are able to go during an off-time, such as when local schools are in session, you probably won’t face many long lines. I survived 3-4 hours at the park today and had only one wait that was longer than ten minutes. Weekends will be longer, though, as Nickelodeon Universe represents a pretty inexpensive way to entertain your little ones for the day.

I have to admit, I was pleasantly surprised by the park. Overall, it was inexpensive, clean and kept my kids entertained for hours. The staff wasn’t what I would call energetic, but most people that we interacted with were “Minnesota-Nice.” There were plenty of rides that we could do together as a family, including one of the better flumes that I have been on, but when my son and daughter wanted to split up to do different rides, each had several tailored to them. If you need to kill some time in the Minneapolis area, there are definitely worse places you could go.