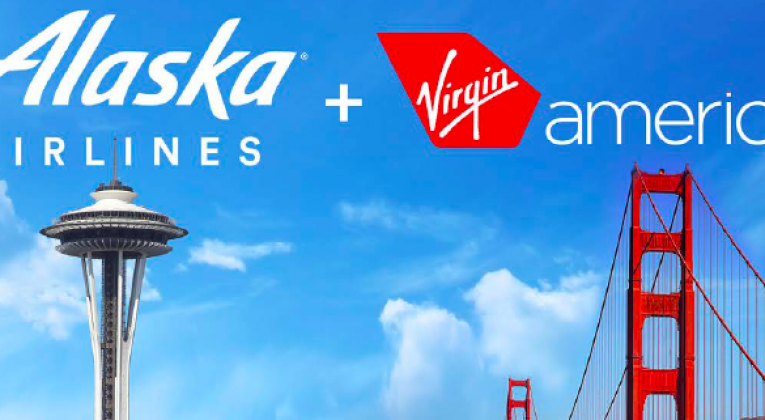 Ouch. On Monday morning, Alaska Airlines (ALK) announced that it is buying Virgin America (VA) for $2.6b, or $57 per share. That price represents a 90% premium to the price just a few weeks ago, before the first rumors that Virgin was for sale. On an enterprise value basis, which includes net debt and the present value of future lease payments, the total is in the $4bn range (although only $2.6bn is payable at closing). Ouch.

The first concern is whether the transaction faces hurdles from either a financing or regulatory point of view. It passes easily on both concerns.

The company will use $600 million of cash, combined with $2bn in new debt. Both airlines have strong balance sheets, unusual for the industry. Alaska could borrow against its fleet of unencumbered (no debt outstanding against them) aircraft, but there will likely be investment banks lining up to give them money at a low interest rate.

On the regulatory front, both airlines represent a tiny percentage of overall domestic capacity. Together, they won’t be more than a mid-single digit percentage. With airfares having decreased YTD in 2016, as well as for the full year 2015, the airlines have a little more leverage to combine. Not much, but a little.

So What Could Go Wrong? Well, Since You Asked…

The biggest complaint that many investors have is the dual fleet types, with Alaska a Boeing booster and Virgin an Airbus aficionado. Running multiple fleet types is expensive. You need additional training for both flight crews and mechanics, higher working capital for spares, higher maintenance costs, etc. Normally, the argument in favor of a second fleet type would be a better negotiating position with the manufacturers, but the Airbus planes are almost entirely leased and begin to roll off in 2020. The likelihood that Alaska would start to buy Airbus is only minimal, so I wouldn’t count on big give-backs from Boeing.

Alaska is talking up California in its rationale. “California has 3X as many customers as Alaska, Washington and Oregon together.” “We will be the biggest airline up and down the west coast.” “We will have great market share at SFO and LAX.” Etc. While none of these statements are factually incorrect, they also include a fair amount of data mining.

This merger will create minimal new business for the combined entity. It’s not as if we are connecting an east coast, Europe-centric carrier with a west coast, Asia-centric one. Few new routes will be created because of the merger and there will only be minimal revenue upside to the new entity because there won’t be much market share shift. Sure, as Alaska points out, it is moving from #6 to #2 at San Francisco, but that’s not organic growth. They’re simply buying the #3 player. You now have four players between 10% and 16%. Even being at the high end of that range provides you few benefits, particularly when the #1 player controls almost half of the capacity. LAX looks even worse. The combined entity will have only 11% of the market, good for 5th place.

Alaska will have the largest share of capacity up and down the coast, but those numbers are deceptive when it comes to translating seats into paying passengers. Outside of the Pacific Northwest, Alaska’s biggest city (pre-merger) is actually San Diego. Flights from the Pacific Northwest to San Diego are going to overfly SFO/LAX; no passenger is going to connect there. Likewise, you could ask eastbound passengers from SAN or SEA to connect in SFO or LAX, but there’s likely a non-stop that could do the job to/from those cities.

The big advantage for Alaska is the increase of gates that it will pick up at slot-constrained airports. In addition to SFO and LAX, it picks up a couple of gates at Love Field. It also picks up slots at the “NYC3” of LGA, JFK and EWR, as well as 10 at DCA. They pick up several hundred millions of dollars of value there, depending on how you value them (even with perimeter restrictions at LGA), but the actual increase in total passengers flown between the two airlines will be a “1+1=2.1” scenario, not the “1+1=3” that airline mergers shoot for.

Bottom Line: On the investor call today, management stated that the merger “gives us a good shot of being your go-to airline if you live anywhere up and down the west coast,” but there are a lot of seats that won’t translate into incremental passengers.

I touched briefly on fleet costs above, but labor costs won’t be any easier. Currently, Virgin America pilots get paid approximately 15% less than pilots at Alaska with similar seniority. Obviously, that doesn’t take into account work rules, but it’s fair to say that VA pilots ply their wares at a significant discount to those at Alaska. Thus, to integrate the airlines, they will need to approach the workforces and come up with new contracts. Given that it’s unlikely that legacy Alaska pilots will take a pay cut, VA pilots will likely be getting an increase. And by reopening the contracts, there is a possibility that the pilots will insist on being marked to the current market, not the one when the contracts were first agreed upon. There’s another 5-10%.

But won’t they save money with the inevitable “synergies?” Maybe, but this isn’t the US Airways-Delta proposal of 2007, when US Airways wanted to wipe out much of the east coast capacity. There is actually very little current overlap between Alaska and VA; the two overlap on only about 5% of Alaska’s routes. Thus, there is little excess capacity to pull out, meaning that fares will stay where they are, as will costs. Of course, you can wipe out a lot of the back office costs, but you also have to weigh those against not only labor increases but also the $300-350m of up-front integration costs.

So Where’s The Upside?

Outside of picking up a bit of incremental traffic and some slots at constrained airports, Alaska had one big reason for proposing this merger: diversification out of the Pacific Northwest. Alaska has been facing 8-10% competitive capacity growth for the past three years, with the lion’s share of that coming from Delta incursions into Seattle and Portland over the past 24 months (and an assist from Southwest, up and down the coast). It has been holding its own in its home cities, but something will eventually break, with that “something” likely being yields (pricing) in their markets. Virgin is only about ¼ the size of Alaska, but it offers diversification away from Sea-Tac and adds strength in its core west coast markets. Of course, Alaska is paying dearly for that shift.

The great unknown right now is the impact of the integration on the operations and brands of the two airlines. Right now, both shine, with strong reputations as solid carriers with friendly employees. In the Wall Street Journal’s annual Airline Scorecard last year, both looked excellent. But integrations are tricky, and it is just as likely that combining the first and second best carriers will result in third place (or worse) as it will first.

Even though both Alaska Airlines and Virgin America have strong brands, how do you maximize their combination? Management did not inspire a lot of confidence on the call when it answered that question by saying that they “want to learn more about it.” Learn more about it? Shouldn’t that have been done before the $2.5bn offer? They said that they are “potentially using” the Virgin name going forward, but haven’t discussed royalty payments to the Virgin Group. I understand that JetBlue was also in on the gig, but I’d really rather you did your due diligence up front.

Alaska management also said that it believes that Virgin America’s brand is “driving a big revenue premium.” In other words, consumers are willing to pay more for a seat on VA than it would on any other airline. If that were true, then it would be the first time it happened in airline history. Passengers, particularly leisure passengers, buy their tickets based on price. Period. Sure, it’s easy enough to find an example here or there of a frequent flyer willing to pay a premium to fly on their favorite carrier, but that passenger is the exception, not the rule.

On the call, Alaska told investors that the transaction would be accretive, or positive for profits, in its first year. That’s true. When you’re using cash that earns nothing and borrowing at close to nothing, buying a profitable entity should be accretive (ignoring those nasty integration costs, of course). I know a lot of the folks at Alaska and I think that they are among the smartest people in the industry, but I really hope that they know something I don’t about the integration.

Richard Branson told the media, “I would be lying if I didn’t admit sadness that our wonderful airline is merging with another.” I’m hoping that the size of his check will help him get over it.

Meanwhile, when asked about how they determined the appropriate price for Virgin America, Alaska said that it “thinks about value, not price.” I’m just not sure where the value will be. Having said that, this management team has done an extraordinary job growing the airline in the face of tremendous competitive pressure. This may be the team to turn a tough merger into a triumph.