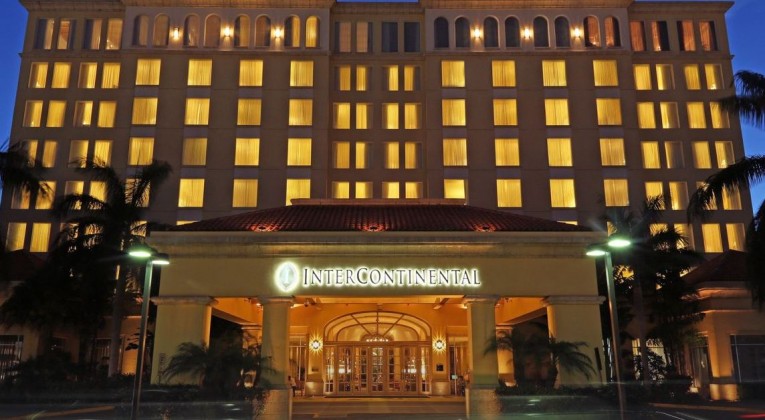 The Share Forever promotion lasts from May 1 until September 5, although registration opened yesterday (A registration link is available on their website under “IHG Rewards Club Offers.”). Pay attention to the details to make sure that your stays are within the designated time periods. And like the last promotion, much of the world can’t participate. This one is open only to North and South America residents.

IHG’s promotions typically ask you to complete a number of tasks to earn points. As you complete each step, you earn additional bonuses. For example, to earn points in my last offer, Accelerate 2016, I was asked to stay a weekend night, pay with my IHG credit card and pay a “bonus rate,” which gave me an extra thousand points for $4. I loved that promo: Not only were the tasks easy but I could also complete them all with just one Saturday night stay.

Share Forever is slightly different in two respects. First, all tasks revolve around a number of nights at their properties. No extra bonuses for using your IHG card, ordering a meal, staying at a hotel in Yemen, etc. This one also has a “sharing” feature, similar to a past promo. In addition to the bonuses that you earn for finishing a step, you also get bonuses to share with a friend (There’s no indication that the “friend” can’t be someone you see when you look in the mirror.). These additional points were certainly built into the reward structure.

With IHG promotions, you can always be guaranteed two things:

Outside of the usual typos (which are always numerous for IHG; seriously, guys, get an editor), there will be confusion around the requirements and changes will be made halfway through the promotion period, usually to the detriment of the participant (For the most part, IHG has, in the past, made people whole on the original promo terms if they complained.). For example, in Accelerate, many of us were told that we would earn bonuses by finishing three out of four steps, only there were five potential tasks listed. This year, there appear to be some counting errors.

I’ve always been amused by the term “loyalty program.” While there are aspects of it, such as elite status, that reward past stays, the programs really exist to generate incremental future sales.

Such is the case with IHG’s promotions. If you are an infrequent customer, like me, the company knows that you aren’t going to jump from zero stays in a quarter to 50. Its true goal is to generate incremental nights and get you active, so your requirements will be relatively easy. For instance, I got the offer  above for the Share Forever promotion. It’s unlikely that I’m going to stay the full 24 nights, but they make the first couple of goals very easy and then add a sweetener every few nights, in the hopes that I’ll say, “Well, I’m already staying nine nights. I might as well stay an additional six for a free night to share.” And if they only pick up a few nights from me, that’s better than they would have gotten otherwise.

On the other hand, if you have already stayed with them dozens of times over the past year, they know they have you. There’s no incentive to offer you points for one or two nights because revenue management knows that you will be there, anyway. You might be asked to stay 40 or 50 nights to max out on the bonus. Your bonus will likely be higher someone who only has to stay a few nights, but the “volume to value” equation will likely be greater for the person who rarely stays with them.

I don’t, by the way, have any issue with the way that they run the promotion, although I’ve found that IHG takes the “loyalty penalty” to the extreme. It’s their program and they are a publicly traded company that aims to make money. But they also have to deal with the fact that they risk angering some of their most loyal customers, while providing them an incentive to stay fewer nights, not more (If you stay fewer nights during this promotion, the requirements of your next one will likely be easier.).

Ironically, I’ve always been a fan of IHG’s promotions because I stay with them so infrequently. Everyone’s offer will be different, however, and it costs you nothing to sign up for it. The worst that happens is that you don’t earn a bonus and get a better one four months from now.