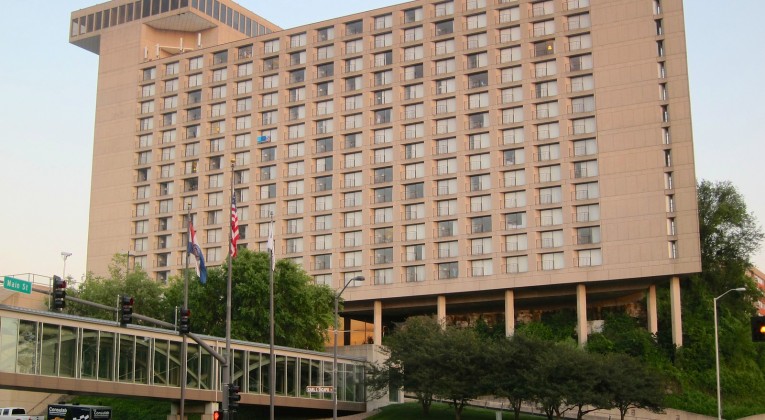 The Westin Kansas City at Crown Center is one of the best located hotels in Kansas City. Steps from the Liberty Memorial, home to the National World War I Museum, Union Station, and a short walk or drive from the well known Power and Light District. Located in Crown Center, a shopping center owned and operated by Hallmark Cards, the Westin offers 724 guest rooms and is a great choice for those visiting Kansas City for business or pleasure.

I live just over thirty minutes from Kansas City, so unless there is a good deal for a mattress run, I normally wouldn’t consider spending the night in. On this particular occasion, I was scheduled to arrive in Kansas City late in the evening, while the next day I had to attend an all-day training for work. To save time and allow for extra sleep, I decided to book a room at the Westin.

There was no wait to check-in, which surprised me, considering how busy the hotel was. The associate confirmed my SPG Platinum status and offered me a choice of welcome amenities. I was then given information on how to access the club lounge, located on the 17th floor, just a few doors down from my room. Additionally, the associate provided me with information to self-park. The cost was $17/night (I suppose it could be worse…), though the benefit was a somewhat secured garage.

Although the associate mentioned that I had been upgraded to a nice room, it ended up being a standard guestroom, which was fine for my short stay. Located on the 17th floor, my room looked to the East, offering good views of Crown Center, the Sheraton Crown Center (formerly the Hyatt Regency that had a walkway collapse in 1981), and the Eastern edge of Kansas City. It’s not the most attractive view, as most would prefer to see Union Station (especially during a Royals World Series parade!! 🙂 ), or the Liberty Memorial, but who spends all their time looking out the windows in a hotel room?

The room was typical of a Westin and I found it to be pretty comfortable. Most of my stay was spent preparing for the following day, though the room was comfortable and offered plenty of space to relax. When night rolled around, the bedding seemed as though it had recently been refreshed, something which would seem crucial in a hotel with so many rooms. (Have you ever wondered how many people have slept in a hotel bed?)

Just a few doors from my room was the Executive Club Lounge. Located in the middle of the floor, I figured it wouldn’t be too big, a fact that I confirmed once I stepped inside. For a hotel with 724 rooms, I was surprised that the hotel didn’t have a dedicated space that could accommodate more than 15~ guests.

Inside, I signed my name on the guest clipboard and was welcomed by a very friendly associate. Before he found out that I lived locally, I was given a number of recommendations for local sites and restaurants (BBQ-need I say more?!) to visit and even got an offer to help with making reservations.

Dinner service was just about to end, though I managed to make one pass for a few snacks. The buffet was fairly limited, though they did offer one hot dish (wontons), in addition to veggies, cookies, and some other snack foods.

A cooler was setup with a variety of non-alcoholic beverages (pop, water, juice, etc) and the associate working the lounge was happy to grab beer or wine from the back room. Though not the most impressive setup, I’ll gladly take this over no lounge.

While I would HIGHLY recommend trying some of the local fare if visiting Kansas City, the Westin does have a few dining options for those wishing to stay close. The Brasserie, located on the lobby level, offers a variety of items and is open for breakfast, lunch and dinner. They even offer a full bar, open until 1am Friday and Saturday.

Inside Crown Center, you can choose from restaurants offering American or Italian cuisine. Outside the hotel, there are too many options to list. Kansas City is famous for our delicious BBQ, so one option is to visit one of my favorites, Jack Stack, located in the Freight House District. The hotel even has a free shuttle service that will take you there and back, as well as to the Power and Light District. Outside of BBQ, Yelp has a great list of the best restaurants in Kansas City and the surrounding area.

Kansas City is constantly working to improve the look of the city. Though it used to be a place that I wouldn’t want to spend much time, especially at night, projects such as the Power and Light District and revitalization of the local area have truly transformed the city into a place that has plenty of offer.

The city is well covered with Uber, and taxi’s (if you want to use one…), so access to the sights should never be an issue for a visitor without a car. In a few months, the KC Streetcar plans to begin operating along a two mile stretch from the River Market to Union Station. Offering wifi, the Streetcar will be free for all riders and operating until 2am on Friday and Saturday.

If you have not had the opportunity to visit Kansas City, I highly recommend stopping by. Though I may sound biased because I live nearby, I truly think the city has something to offer for everybody, whether you are into museums, nightlife, relaxing or shopping. If you are an AvGeek, as I imagine most InsideFlyer readers are, then you may be even more interested to learn that Kansas City is home to two aviation museums. The TWA Museum and National Airline History Museum are both located at the Downtown Kansas City Airport and offer an incredible assortment of items from the golden age of flying.

This was a bit of an unusual stay for me, as I would normally spend the night at home if I had to attend a function in Kansas City. Nevertheless, I was pleased with the time I spent at the Westin. The location certainly can’t be beat, and the opening of the Streetcar in the spring will make it even better for those wishing to visit other parts of Kansas City and save the cost of an Uber or a taxi.

The parking setup at the hotel was a bit odd, which I learned about as I was barked at by the contract attendant working in the underground garage. When entering the garage, I took a paper ticket that I later had to write my name on room # on. For whatever reason, the hotel was not setup to allow entry/exit via room-key, a process that would be much faster and possibly allow for better accounting for the hotel. Best as I could see, there was no way to verify that I had written the correct name and room number on my card.

Overall, this is a decent Westin offering and prices are usually quite reasonable on the weekends. Most times I’ve checked, the hotel has had a decent supply of cash and points rooms available, which run at 3,500 points and $55. The hotel did receive a slight refresh in 2013, though I wouldn’t say no to a major remodel that brings the design of the guest rooms and other parts of the hotel into the 21st century. Perhaps they would even build a dedicated lounge?

The Westin is in an excellent area for those wishing to be in the heart of Kansas City. Though small, the Executive Lounge offers great views of the Liberty Memorial, Union Station and points West. Staff in the hotel were always willing to assist, especially those working the lounge.

Parking is a bit pricey and the system for entering/exiting is cumbersome.

The Westin is located in one of the best parts of Kansas City and is ideal for those who want to enjoy the sights, such as the WWI museum, or those wanting to indulge in the various bars and restaurants located at Power and Light. The staff I interacted with throughout my stay were friendly and happy to assist in any way they could. There is no Hyatt presence in downtown Kansas City, so I would certainly stay with the Westin again. That is, until the 800 room Hyatt is built!