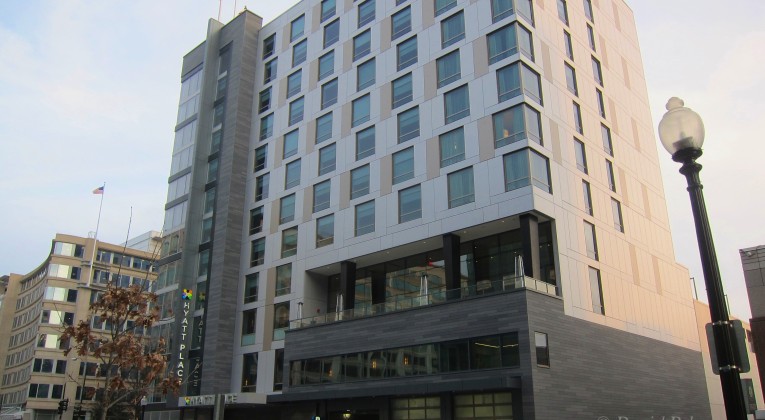 The Hyatt Place Washington D.C./National Mall was opened in November, 2015, and offers 214 rooms on a premier stretch of Washington DC. Less than a mile from the United States Capitol, the hotel is within walking distance of a variety of monuments, museums, and other important parts of our nation’s capitol. I chose the Hyatt Place when searching for the best property to stay at during my birthday trip to Washington D.C. While the Park Hyatt would have been nice, you can’t beat the convenience and cost of this Hyatt Place!

It took just under 10 minutes to walk to the hotel from the L’Enfant Metro station. While an Uber from DCA would’ve dropped us in front of the building, why spend $15 when you can spend $1.85?

The front desk is located on the 3rd floor of the hotel. After the short elevator ride from the ground level, a friendly “gallery host” welcomed us to the Hyatt Place, offered an explanation of the benefits provided (a speech I think I have memorized by now.. 😉 ) and provided information on the local area. This was my first time staying in this particular part of Washington D.C., so he even offered a local map as well as a map of the D.C. Metro.

Chalking it up to the hotel still being new, I did have to remind the host about the various Diamond Gold Passport amenities that are offered at Hyatt Place, such as the late check-out (we had an 8pm flight) and welcome amenity (points or food/beverage).

Like all Hyatt Place properties built within the last few years, this property was built with the new design in mind. While older Hyatt Place properties, especially those converted over from Amerisuites, can look somewhat like a budget hotel, the new design really brings the brand into 21st century and doesn’t seem nearly as cramped as the previous design. A common complaint I have with hotel rooms is the lack of lighting, something the Hyatt Place was not lacking!

The room had plenty of power outlets available, including three near the beds. The only that seemed to be missing was a room phone. One is available on the desk, though I can imagine people who would prefer it be located next to the bed to assist with wake-up calls, etc.

While the room was typical of what you would get at any newer Hyatt Place, I was impressed with the comfort of the couches and the wide variety of channels available on the TV. We received a diverse mix of programming and even had the ability to watch a number of movie channels at no cost.

My only complaint about the room was the fact that it backed up to the highway. Except for a small window, late at night, the noise of the traffic was noticeable, as was every car horn or emergency siren that went by. Obviously it’s too late to make any major design changes, so ask for an room ending with an even number if you stay here.

If you are in the mood for visiting the gym during your stay, then you are in luck. The Hyatt Place offers a 24/7 gym on the 3rd floor, just behind the elevators/front desk. The gym has a variety of equipment, pretty much what you’d expect to see at your local gym. In addition to the cardio machines, they had a full rack of weights.

The hotel even offers a salt-water pool, which seems unique to this property. I don’t recall ever seeing a Hyatt Place with a salt-water pool. The downside? It’s an outdoor pool, so it is useless, unless you visit outside of the colder months.

There is a small business center to the left of the front desk with three computers available for guest use.

Consistent with the Hyatt Place brand, breakfast is included for each guest. During our three days at the hotel, the main dish was different each day. Offerings included breakfast sandwiches on the first morning, pancakes and waffles on the second and eggs and sausage on our final morning.

Besides the food offered by the hotel, there’s not a whole lot to choose from immediately surrounding the hotel. Throughout most of the trip, we either rode the Metro or took an Uber to the area North of the National Mall, offering an enormous amount of restaurants, bars, and more. For a nice meal, be sure to visit Old Ebbitt Grill, located just footsteps from the White House. We chose from the fixed menu, offering an appetizer, entree, dessert and glass of wine for $35. The meal was excellent and the atmosphere in the restaurant was certainly unique to the local area. View photos and the menu on their Yelp page.

As previously mentioned, this property is just a few blocks South of the National Mall and several Federal offices, such as the Department of Housing, NASA, the Department of Homeland Security and more. For those wishing to ride the D.C. Metro, it’s an easy walk up 7th to L’Enfant Plaza, which offers service from 5/6 Metro lines. There are also several bus lines available nearby, though we didn’t experiment with the bus system. Traffic in D.C. is bad enough, I’m not sure I would want to be stuck on a bus during rush hour.

Hotels in Washington D.C. are generally quite expensive, which means that I’ll often stay in Crystal City if flying into DCA. In the case of the Hyatt Place, I felt as though the $109/night rate I paid was very reasonable for the area and would definitely return if I wanted to be close to the touristy parts of Washington D.C. As with all new hotels, there seem to be a few small kinks that still need to be ironed out, though I have no doubt these will disappear as the employees of the hotel have a bit more time to settle into their surroundings.

Noise - bring earplugs if the sound of traffic bothers you.

If you want to save some money on lodging when visiting Washington D.C., you can't go wrong with the Hyatt Place. The hotel is within walking distance of the National Mall and several mass transit options, allowing for quick access across Washington D.C. and Virginia. Dining options aren't very plentiful, so be sure to check Yelp for reviews of local establishments.