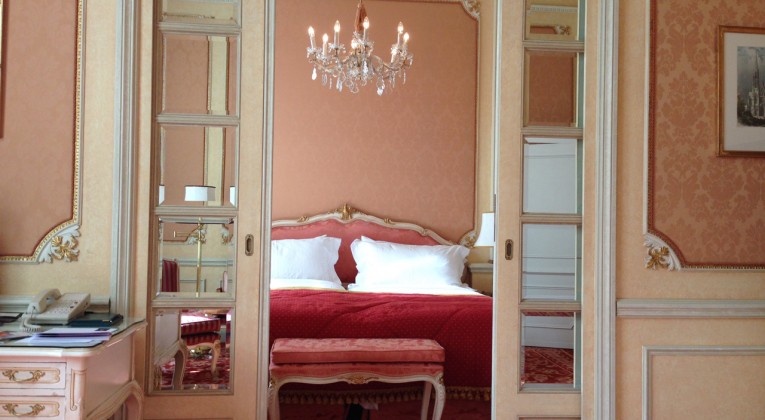 The Hotel Imperial was once the former private palace of Prince Philip of Wurttemberg in 1863, and rumored to have been a gift from the bride’s father. When the city built a street between the park behind the palace and palace without asking the Prince’s permission, the Prince left the place in an huff. In 1873, the palace was transformed into the Hotel Imperial and the hotel has strived to provide impeccable service ever since. A Luxury Collection property in SPG’s portfolio located in one of my favorite cities (Vienna), I decided to try it out.

Transportation took about 30 minutes via cab from Vienna airport to the hotel but I could also have taken the train, getting off at Karlsplatz station. I was greeted warmly at check-in and told that even though I had reserved a regular room using Cash & Points, I had been upgraded because of my Platinum status. I wasn’t just upgraded to one of the two types of Jr Suites, but to a full Elisabeth Suite!

After going through the formalities, she mentioned that because they were renovating the elevator area on the main floor I’d need to go up the first small flight of stairs, and then take the Royal Staircase to get to the elevators which turned out not to be a big deal at all.

In years past, horse drawn carriages stopped right in front of the Royal Staircase near the lobby (which was used as a driveway) to deliver the Prince’s guests to access the private apartments on the first floor. The original cobblestone street is still hidden beneath the lobby’s current marble floor. Today the 6400 square foot room on the first floor can be booked, and esteemed past guests include the Queen of England, the King of Sweden, Indira Ghandi, and Michael Jackson. There’s even a secret passage to the service stairs at the top of the Royal Staircase behind the Danube Mermaid statue.

My 800 square foot Elisabeth suite may have been a bit less grand than the royal accommodations, but just barely. I felt as though I had been whisked through a portal into 19th century Vienna. Each of the Elisabeth suites is unique, and I loved mine. Not two, but three sets of drapes made it easy to have an opaque covering over the windows, a slightly dimmer cover, or full blackout. There was a chandelier, high ceilings, and beautiful designs on the walls.The modern TV against the wall seemed a bit out of place with its grand surroundings though. The bed was two twins pushed together, but the mattress was the most comfortable I think I’ve ever slept on.

The bathroom was clean and had all the modern things expected, which is sometimes a challenge at older properties. There were double sinks, wall outlet for charging, and lighted vanity mirror. The amenities were from Bulgari’s Vert line. The toilet room had both a bidet and a scale, and a tub was across from the sinks.

The romantic dusty rose-hued sitting area had an oil painting, walls cocooned in silk, and a shimmering chandelier. Big windows let in lots of light, and there were gauzy window coverings that gave the room an ethereal feel.

A tray of complimentary water bottles was provided in the hallway on the way to the room, and when I took a couple bottles in the late evening I noticed early the next morning that they had already been replaced. Breakfast at Café Imperial was something special. Laurent Perrier Champagne, made to order omelets, and fried eggs were all served by white gloved attendants. The buffet consisted of hot and cold items, and the freshly made pastries were a standout. I was told later that the cafe is a prestigious and traditional place for Viennese and international clients to meet over coffee. The hotel also has a gym and spa, though I didn’t go to either.

Platinum status recognition was outstanding, with an upgrade to a full suite.

A bowl of fresh fruit with silver utensils, a card, and a welcome gift of chocolates waited for me on the table in the suite.

Further inspection revealed that the welcome gift was a full box of bite size Imperial Tortes, a decadent concoction of milk chocolate, almonds, marzipan, and cocoa crème. Handmade at the hotel, legend has it that an apprentice cook invented the Torte on the occasion of the opening of the hotel in the honor of his Majesty, Emperor Franz Joseph I. They are shipped out worldwide, but can only be purchased at the hotel. Delicious!

I used Cash & Points for this Category 6 property. As an SPG Platinum member, I chose breakfast as the amenity which was a wise choice. At 80EUR per person, this was quite a deal. Plus, I was given personalized cards, fresh fruit, and a box of Imperial Tortes.

To sum up, my stay was flawless. Rich in tradition, the hotel itself is preserved as step back into a grander time, while staff offer extraordinary attention to detail and personalized service. I can’t even think of any negatives, except that I would have preferred a King bed rather than twins put together. I’m glad I tried this hotel out, and would happily return.

Even though I received outstanding elite status recognition, even the most basic room would have the same stellar attention to detail and personalized service from staff. If you're looking for a romantic hotel for a getaway (for Valentine's Day or a special occasion), I'd strongly recommend this property. This was one of my best hotel stays ever.