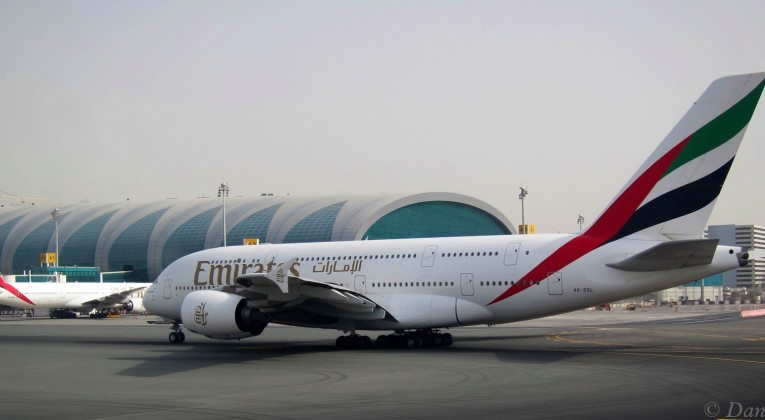 Following the December 9th news of United’s intent to cancel service as of January 23rd, Emirates intends to upgauge service on their Dubai – Washington Dulles route to the A380, beginning February 1st. The route is currently served by the Boeing 777-300ER, which offers an uncompetitive angled lie-flat product in the business class cabin.

Replacing the existing Boeing 777-300ER used on this route, the A380 will serve the strong customer demand and restore route capacity following United Airlines’ planned withdrawal from the Washington D.C. (IAD) – Dubai (DXB) route after 25th January 2016. The aircraft upgauge will also offer consumers travelling on the Washington, D.C. route the unique experience of Emirates’ flagship A380 aircraft, and a seamless Emirates A380 experience to many connecting destinations on the airline’s global network.

On-board the Emirates A380

The Emirates A380 contains 14 suites in First Class, 76 flat-bed seats in Business Class and between 399-427 seats in the Main Cabin. Unique to the A380, Emirates offers a private shower, reserved for their passengers seated in First Class. Other features include thousands of items available to watch on the seat back entertainment system and complimentary wi-fi.

What’s more, First and Business Class passengers can travel to and from the airport via Emirates complimentary Chauffeur-drive service as well as enjoy Emirates exclusive lounge access in Dubai and at several locations around the world.  Once on board the A380, passengers in premium class seating can relax in Emirates’ flat-bed seats and enjoy Emirates’ onboard lounge. First Class passengers can unwind in their very own Private Suite and prepare for their arrival in the Emirates A380 Shower Spa.

Although the entry of the A380 will mean a huge improvement in product, compared to what United offers, the change is disappointing for United passengers who are able to redeem certificates for upgrades to the premium cabin or redeem miles under the cheaper United award chart. MileagePlus members wishing to visit Dubai will have to redeem miles on a Star Alliance partner, such as Lufthansa via Frankfurt, and pay 80K miles for Business or 140K for First (one-way).

For the past few years, we’ve been subjected to a variety of ad campaigns from the Airline Pilots Association, various US Airlines, and other groups who believe that UAE carriers Emirates, Etihad, & Qatar (the big three) are receiving unfair subsidies from their governments, which they claim enables the big three to over-saturate the United States with service to the Middle East. Of course this forgets the valid argument that the big three offer a superior product than Delta and United, one which they claim is the reason more passengers choose to fly the big three.

Nevertheless, the fight against the big three came to a boiling point when Delta announced the cancellation of their Atlanta – Dubai service in late October.

Posted to the Delta news hub and titled “Subsidized Gulf carrier competition forces Delta to cancel ATL-Dubai“, Delta went straight into the argument that they could not sustain their nonstop service due to overcapacity. Within days, they were ridiculed by many in the aviation community, including Emirates, who rebuked the claims of subsidies. Days after announcing the cancellation, a column titled “The real reason Delta is pulling out of Dubai” was posted to Air Transport World, drawing a reaction from Delta’s Executive Vice President and Chief Legal Officer.

Air Transport World had the following to say regarding the route cancellation.

In other words, Delta is blaming its pullout on the Gulf carriers on which it has waged war for many months over alleged subsidies and Open Skies compliance.

But hang on a moment… how many flights do Emirates, Etihad and Qatar Airways operate to Atlanta? The shocking answer is: zero. So Delta has exclusivity on Atlanta-Dubai, yet apparently can’t make a go of the route. How so?

At least part of the answer lies with these airline route maps…Delta’s 777 will take you from Atlanta to Dubai, but from there,…it’s a dead end. And, as Delta references in its statement today, the majority of people who fly from outside the Gulf states on one of three Gulf carriers are not going to Abu Dhabi, Doha or Dubai. They are transiting, and in ever larger numbers, their real destination is the sub-Indian continent: Bangladesh, India, Pakistan and so on, all places where, as the Emirates route map shows, the Dubai carrier offers multiple city destinations.

As one would expect, Delta’s response went straight towards the 12 daily, “heavily subsidized”, flights offered by Emirates from the United States to Dubai.

Unlike Delta, the Gulf carriers don’t have to worry about being profitable or operating under the normal constraints of a free market, making fair competition impossible. Indeed, Delta’s Atlanta-Dubai route lost money for two years before we made the difficult decision to cancel the service.

The point that Walker omits is, of course, the stunning level of subsidy enjoyed by the Gulf carriers. At $42 billion and growing, it is one of the largest trade-distorting subsidies on record, and without question violates the Open Skies agreements between the U.S. and Qatar and the United Arab Emirates.

Emirates quickly responded to the claims made by Delta.

Emirates says industry data show that Delta’s Dubai flights have had average seat loads consistently over 85% and that Emirates own studies indicate that the route was “highly profitable” with “an estimated route profitability of over $10 million per annum, or a route net margin of 7%.”

“Delta effectively has a monopoly on the Atlanta-Dubai route, they can carry ‘Fly America’ traffic that is protected from non-US carriers, and enjoy high seat loads and yield on the route. By any airline’s standards, these are lucrative conditions and hardly reason to cease the Atlanta-Dubai service,” an Emirates spokesperson said.

United, on the other hand, also blamed the decision to cancel nonstop Washington – Dubai service on the “unfair subsidies” that the big three receive, though they didn’t stop there. They claim the recent awarding of the 2016 government contract, covering traffic from Washington – Dubai, to Emirates code-share partner jetBlue.

In August, the General Services Administration (GSA) announced that it awarded the U.S. government contract for 2016 on the Washington-Dubai route to JetBlue, a codeshare partner of Emirates. We formally protested this decision but were ultimately unsuccessful. “It is unfortunate that the GSA awarded this route to an airline that has no service to the Middle East and will rely entirely on a subsidized foreign carrier to transport U.S. government employees, military personnel and contractors,” said Regulatory and Policy VP Steve Morrissey. “We believe this decision violates the intent of the Fly America Act, which expressly limits the U.S. government from procuring commercial airline services directly from a non-U.S. carrier. For the Washington to Dubai route, JetBlue merely serves as a booking agent for Emirates.”

Whatever your position on the debate between the big three, the Airline Pilots Association, Delta, & United, the last few months sure have been interesting. United will exit the Dubai market with the departure of UA977 on January 25th, ending a successful seven years serving Dubai. Service to Kuwait City and Bahrain end in two days, on January 13th.

The big item to keep an eye on in the coming months will be a rumor reported January 8th in a publication of Airways News. They claim that American is looking into operating a flight from Dallas/Fort Worth International Airport to Abu Dhabi on the days Etihad does not offer their nonstop to Dallas.

American Airlines is strongly considering a sub-weekly operation into Abu Dhabi on its own metal.