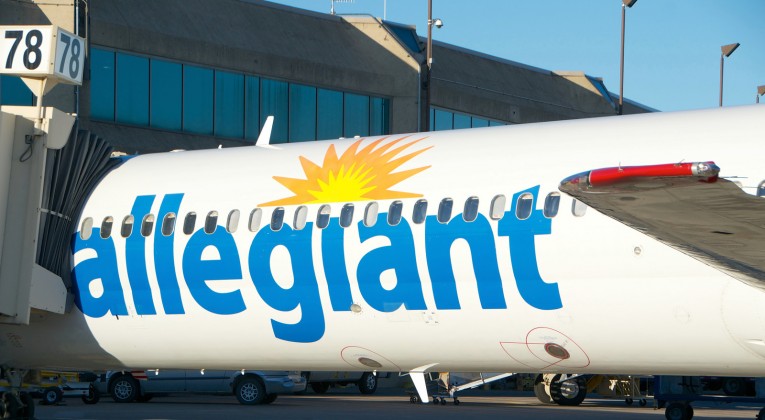 For most readers on InsideFlyer, I would hazard a guess that Allegiant is not the first airline they think of when planning a trip. I’d be lying if I said I thought about flying on Allegiant when booking trips for fun or work. Why fly an airline where you have to pay for everything, when you could fly an airline that offers complimentary upgrades to first class, free carry-on or checked bags, TSA PreCheck or many of the other benefits provided by a legacy carrier?

I’ve always enjoyed flying on inaugural flights, so when Allegiant announced they would begin service from Kansas City to three cities in Florida (Orlando/Sanford, Punta Gorda/Fort Myers, & St. Petersburg/Clearwater), I quickly booked a seat on the first flight.

With the exception of an announcement of new routes or the latest ancillary fees, there is very little in the way of trip reports about the Allegiant experience. With the inaugural booked, it seemed like a perfect thing to write about for those looking for a change of scenery on their next trip 🙂

Though I normally plan to arrive at the airport about 25 minutes before boarding, my flight on Allegiant would not qualify for TSA PreCheck and with the inaugural festivities, I decided to get to the airport much earlier than normal. Before leaving, I made sure to print out my boarding pass. Allegiant charges $5 if you have it printed by an agent at the ticket counter. They’ve also got a mobile app, which offers another way to avoid paying for a boarding pass.

Moments before entering the security checkpoint, the last of the 109 passengers and crew from the inbound flight had just deplaned. None of the flight attendants had been to Kansas City, so there was some (understandable) disappointment that they wouldn’t have time to get some famous Kansas City BBQ.

Past security, everybody was treated to live music, a delicious buffet from Beaches Cantina (a local restaurant), some swag, and overall, a festive atmosphere. Many passengers remarked that they wished all Allegiant flights were like this. And no, before you ask, there were no fees for the buffet. 😉

Shortly before boarding, a few of us stepped aboard the aircraft to take some photos and check out the seats. I sat in both bulkhead rows and found that the legroom on the D/E/F (right) side was much better than what is offered on the A/B (left) side. All seats aboard the aircraft are “pre-reclined” and don’t offer any additional recline. Though it sounds uncomfortable, I was surprised to find the seats fairly comfortable. I don’t think I’d have any problem flying in these seats again, though I’d of course choose a legacy carrier with an upgrade, if available, over Allegiant’s pre-reclined seats.

The MD-83 operating today’s flight started flying for SAS in the October, 1989, which made it just over twenty-six years old. SAS retired their last MD-80 in October, 2013, although this aircraft was stored in Stockholm in October, 2003. Two months later, it was purchased by Allegiant and began flying a variety of routes within the United States.

The boarding pass had a printed boarding time of 4:20pm, for the 5:20pm departure, though it was closer to 4:45pm when we started boarding. Passengers who had paid the fee ($4-$12) for Priority Access were invited to board first, followed by those who needed some extra time. With an aisle seat in the exit row, I was invited to board with zone 2. My friend, and fellow travel reporter JL, had selected the window seat in the exit row and had a much higher boarding zone. It was a good 7-10 minutes before I saw JL board the aircraft.

Doors were closed a few minutes early and we pushed back for the two hour flight to St. Petersburg. Allegiant does not have a video system installed on their aircraft, so we received a manual safety briefing. Within minutes, we were in the air.

As we reached a smooth cruising altitude, flight attendants rolled down the aisle offering a variety of products available for purchase. Everything came at a price, even a cup of water, though the prices seemed somewhat reasonable when comparing prices to what you would see in an airport snack stand.

Despite the additional charges, passengers were buying up left and right. Two rows of passengers behind us were heading to Florida for a weekend vacation, so they spared no expense in buying up all of the Bud Light offered on the drink cart. It seemed like quite a party, one which I am glad we didn’t have to endure for too long 😉

Shortly before landing, the flight attendants completed another run with the snack cart. For an ultra low cost carrier, the service was surprisingly good. The crew was in a great mood and seemed like they enjoyed their jobs, something that is becoming rare on many flights these days. I can’t count how many flights I’ve flown this year that have had disgruntled crew that do the bare minimum and sit with a magazine in the jump-seat for the remainder of the flight.

On the ground in St. Petersburg, a ramp was quickly rolled up to the aircraft and we deplaned onto the ramp. Despite running as a focus city, all Allegiant flights board/deboard directly onto the ramp, a plus for AvGeeks, but a negative for those who don’t want to be exposed to jet fuel, the elements, etc.

Just like Frontier or Spirit, Allegiant charges for everything you can think of. There are charges for boarding early, carry-on or checked bags, food or drink purchased aboard the aircraft and more. While some passengers disagree with airlines like Allegiant offering a-la-carte services, I welcome it.

For this particular trip, I was only going to be gone for one night, so all I brought aboard was my backpack. All passengers on Allegiant flights are given one free personal item, a category which my backpack fit into. Had I wanted to purchase an additional bag, fees would have been just $15 for a carry-on. Baggage fees do vary by route, though seem quite reasonable, compared to other airlines.

While I could have declined the purchase of a seat when booking my ticket, I preferred not to be stuck in a middle seat, so I paid the $18 for an aisle seat in the exit row. Legroom was the same as what American offers on their MD-80s.

Though there was a wide variety of services available for me to purchase, all I needed, or wanted, was the extra legroom. The price of my one-way flight was very reasonable, and if I really had to, I wouldn’t have a problem booking an Allegiant flight in the future.

Would you fly Allegiant?

Considering all of the bad press Allegiant has received over the years, I had a very pleasant flight. The prices for the various services seemed reasonable and the overall trip was quite the bargain for $67.00! My return on American was $112, via Tampa, and though my upgrades cleared on both flights, the crews were just "ok". While not my carrier of choice, I would book Allegiant in the future if there was a really good reason to do so.