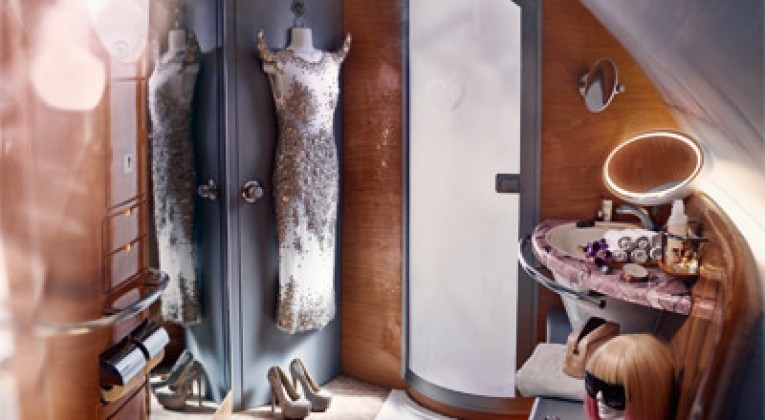 Do you wear a special shirt when you fly? Have to bring your stuffed penguin even if he’s hidden in your carryon bag. Obsessively clean every inch of your seat and tray table before you sit down? Like you and me, some celebrities can be a strange bunch, especially when it comes to traveling. Keep reading to learn weird or unusual celebrity travel habits.

The A-list celebrity actress and former wife of Brad Pitt is extremely superstitious when it comes to flying as told to the Los Angeles Times:

If I walk onto an airplane, I always have to go on with my right foot first and tap the outside of the plane. I have always done it. For luck,” she says. “Someone told me to do it, and I don’t remember when that was. But it’s kind of stuck.”

Hmm, wonder if Emirates Airlines knew about her preoccupation with flying before they contracted her to star in their new ad?

Whether you love or hate Coldplay frontman Chris Martin’s ex and the curator of Goop, Gwyneth Paltrow, this celebrity mom of two definitely has particular habits when it comes to travel. Instyle Magazine reported:

I’ll also spritz colloidal silver all over the seat, because it’s a natural anti-bacterial and anti-viral. Supplements-wise, I take loads of vitamin C and have this magnesium and calcium packet that I put in my water as magnesium is really calming on your nervous system.

Despite having an entourage and a personal assistant to do her bidding, according to Radar Online Kim Kardashian will not fly on commercial airlines.

…she only flies private, because she doesn’t want anyone to judge her if she decides to sprawl out.

Obviously earning frequent flyer miles are not a priority for Kim.

Recently separated actress and model Megan Fox is an extremely nervous flyer.  But it’s nothing that a little “Oops!..I Did It Again” or “Baby One More Time” can’t cure.

I developed that (a fear of flying) when I turned 20. All of a sudden I got really afraid to get on airplanes. I had to come up with a way to deal with it because I didn’t want to have panic attacks every time I get on a plane. I know for a fact it’s not in my destiny to die listening to a Britney Spears album, so I always put that on in my (headphones) when I’m flying because I know it won’t crash if I’ve got Britney on.

Maybe flying wouldn’t be so bad on Megan if the plane was a transformer like Air Raid or Jet Fire?

Envoking the name of Jon Snow, Harington’s character in Game of Thrones, causes women and men to quiver. But flying turns this strong man into milquetoast reported Conde Nast Traveler:

I have a few kind of lucky mascots. I’ve got a lucky pen—it’s one I’ve had since I was a kid, and I carry it everywhere. And I haven’t lost it yet, I’ve lost everything else. I’m kind of OCD, actually. Every time I get on a plane I have to touch the outside of the plane three times before I get in. Each time I fly it feels more unnatural. I get more jittery.

I travel with yarn and knitting needles. I like to have something to do while I am on the plane, and by the end of the flight I usually end up with a new accessory to gift or wear.

Are you a picky eater? Have special dietary restrictions? Food Network host Alton Brown has a solution as told to Conde Nast Traveler.

But by the same token, I do freaky things. People will carry playlists; I won’t do that, but I travel with an espresso maker, an electric kettle, and a small blender. And typically, a tin can of sardines. I have a little portable electric kettle made by Krups for boiling water, and I have this funky little blender called a Ninja because I eat a lot of smoothies and I never want to be a victim of bad road food. And so I have this little bag that carry these three things with me almost everywhere I go.

Sounds like an awfully big “little bag” and a whole lot of extra stuff to unnecessarily tote around.

Do you have any unusual pre-flight rituals? Or travel superstitions?