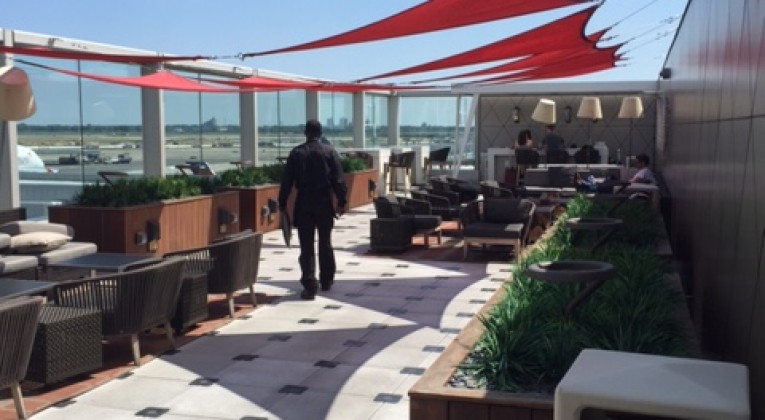 Still occasionally referred to as the “New Sky Club” at JFK, the lounge is no longer so new, but remains one of the best domestic lounges in the system. There are very few lounges in the US that would intentionally get me to the airport early, but if you have a few hours to kill, this one is as good as any I’ve seen.

I visited the JFK Sky Club on the afternoon of August 12, while traveling from New York on business. For those who like to work out on the road, congratulations, this lounge is perfectly located for you, almost in the exact center of the enormous terminal. On the plus side, there is a Shake Shack across from it, so you can replenish the calories that you burned getting there.

At 24,000 square feet, the JFK Sky Club is one of the largest airport lounges that you’ll ever find. It has over 400 seats, six showers, a deck for plane spotting (It’s always fun to see all the different tails at JFK), a full bar and a quiet room. It’s clear that the lounge was built within the past few years. You couldn’t walk ten feet without having access to an electrical outlet, the wireless access was strong and there were dozens of workstations. And did I mention the full bar?

If it is a nice day, you can step out onto the deck and enjoy the view. The deck is a little tricky to find, with the door just behind the food stations. It’s an excellent location to relax and have a drink, get some work done or just check out the tails from all the international flights coming through. I was surprised that, even in the summer, there was no crowd outside. Chalk one up for nondescript doors.

As a new Flagship Club, there were a number of perks. Forget just having clean bathrooms, there were six showers for those with a long layover. There was also tons of additional seating space, a VIP room and a “relaxation room,” which most of us would just refer to as a quiet room. The TVs are set to relaxing views, but the volume is at zero.

A couple of years ago, Delta raised the price of Sky Club access, with the price of Executive (free guests) membership increasing more than 50%, and individual memberships increasing somewhat less. In return, Delta promised that it would increase the quality and quantity of the F&B choices.

To be fair, they have done so, with Biscoff cookies and random fruit turning into a better snack and light appetizers selection. While the selection still lacks that of many international lounges, or even the American Express Centurion Lounges, the gold standard domestically, the offerings are much better than they once were and include actual healthy stuff. Early afternoon saw plenty of fruit and vegetables, a somewhat anemic cheese and cracker tray, two varieties of soup (both of which were actually pretty good) and dips such as Hummus. Of course, they still had the cookies. If you really wanted to, you probably could have assembled a meal, but that would not be my recommendation. At the bar, you could get certain alcoholic drinks for free, as well as all non-alcoholic beverages. There was also a nice selection of sandwiches and salads, all of which could be ordered off the menu.

Overall, I found the employees to be friendly and helpful. They had two employees checking people in, while a couple of others helped customers with more involved issues. There was rarely a line, either at check-in or at the bar, and everyone seemed to be in a good mood.

Terminal 4, right by Gate B31. If you need directions, don’t ask for the Club, but rather, Shake Shack. Everyone at the airport knows where that is.

Numerous amenities, including strong WiFi, showers, a quiet room and resources for both business and leisure travelers.

While the food and beverage selection has improved, it still doesn't meet the standard of what a Flagship Lounge at JFK should offer.

As domestic airline lounges go, Delta's JFK Sky Club in Terminal 4 is one of the best.