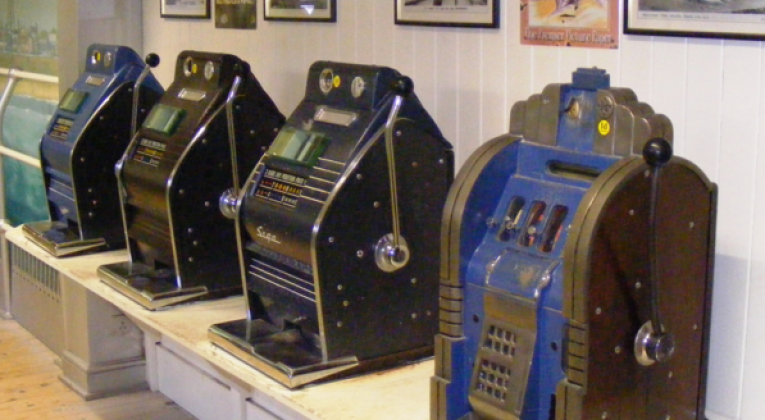 Nothing is more associated with gambling than the slot machine. Dating back to the famous “Liberty Bell” machine at the end of the 19th century, the one-armed bandit has become a mainstay of the casino. The machines didn’t always pay big bucks; before cash winning were legalized, early machines paid in prizes, such as cigars, free drinks or chewing gum (whose flavors were represented by the iconic fruit symbols on the machines).

While the basic premise of the machine hasn’t changed much over time, the execution has. Reel-based machines gave way to video ones. Bonus wins were added. Tickets with a bar code replaced buckets of nickels, eliminating the need for millions of moist towelettes. And slots were given themes. You can play a game based on everyone and everything from Willy Wonka to Wonder Woman. What was once a mechanical device has become a luck-based video game.

Why the Big Deal?

Slots have become the most profitable part of the gaming floor. They aren’t unionized, don’t take breaks, don’t get vacation and work around the clock without complaint. Casinos can either buy the machines outright from the manufacturers, pay a daily fee or use a participation model, where they return a certain portion of the net win to the manufacturer. In other words, they can have almost an infinite return on capital for the casinos. It’s the reason that regional or Native American casinos often have few or no table games, even in jurisdictions where they are allowed. A casino can be guaranteed that, over any given period of time, it will win 10-20% of every dollar that gets inserted. Even when the denominations are low,* those kinds of margins are much better than the casinos would get at table games, where it can be as low as 1/2%.

Casinos are preparing for a distressing fact: Slot machines have peaked. They’re not going away, by any means, but the growth that they have provided will be. Demographics and the way that people experience Las Vegas and, in fact, all casinos, is changing. Obviously, activities and revenues vary by district. Las Vegas is going to generate a higher percentage of its revenue from non-gambling activities than Mystic Lake in Minnesota (There aren’t a lot of nightclubs in Prior Lake.). But they all face the same issues as customers change what they look for in entertainment.

According to a UNLV survey**, the median slot machine gambler in Las Vegas is 56 years old, almost 10 years more than the median age of the average visitor to the city. Around the country (Nevada casinos generate about 30% of gaming revenue nationally.), the gamblers’ median age is similar, although there is no noticeable gap between their ages and those of the average visitor, since the customers are coming only to gamble (There aren’t a lot of other reasons to go to Elgin, IL.). In other words, there is not exactly a youth movement at the slots.

Manufacturers are adjusting by creating machines tailored to younger guests’ tastes and games that are more interactive. For example, here’s a bonus game from a machine based on the television show Family Guy:

Based on the theme, the game is supposed to appeal to millenials. But there is a bigger issue: Forget about themes. The millenials aren’t interested in playing slots regardless of whose picture is on the video.

Video games, the internet, online gaming. The younger generation simply grew up with alternatives to slot machines. The iPad and Nintendo Wii didn’t exist 30 years ago. Seeing cherries and lemons on a machine simply doesn’t qualify as entertainment. Even the video game-like slots don’t rival the sophistication of what the internet can offer, which it does at a cheaper price. “Graduating” from video games to slot machines would be a step down for most people in this generation.

But in the gaming destination cities, such as Las Vegas, the whole gambling industry itself is under pressure from competitors for your entertainment dollars. According to the Las Vegas Convention and Visitors Authority (LVCVA), the percentage of visitors in Las Vegas who gambled has dropped from 83% in 2009 to 71% in 2013.

That’s consistent with overall trends regarding gaming. Throughout most of the 80s, gambling revenue was consistently about 62% of overall visitor revenue to Nevada. But in 1990, that number started moving lower. By 2013, gaming revenue was only 45%. So what happened? Steve Wynn’s Mirage happened. Las Vegas was fighting with new gambling destination Atlantic City, which had launched casino gambling in the late 70s, siphoning off east coast traffic. So Wynn built the Mirage, the first of the modern mega-resorts. At a cost of over $600m to build, most on Wall Street figured that it was only a matter of time before it went bankrupt. Instead, it revolutionized the city. Las Vegas became a destination for restaurants, hotels and other tourist attractions (including a brief period during which it tried to appeal to families, which didn’t go so well). And while total Nevada gaming revenue more than doubled between 1989 and 2013, non-gaming revenue during that period was up more than four-fold.***

Where Do We Go from Here?

Slot machines need to find a way to appeal to people who grew up in an era when video games were common. And it’s gotten more difficult for slot machines to compete, as those same video games have become more interactive. In short, slots are going to have to find a way to develop those characteristics that make Nintendo so appealing. Simply putting Ross, Rachel and the rest of the Friends on a machine isn’t going to do it.

Despite the bells, whistles and cigarette smoke, the slot floor can be eerie: long rows of machines, each with an individual sitting there, repeatedly pushing a button (You don’t even pull a handle anymore.). Video and online games, however, are social in nature. This is a fact that the slot industry has only started paying attention to recently, with the implementation of networked and linked gaming. Systems have now become sophisticated enough to allow one slot machine to have an impact on another. In the past few years, we have also seen the growth of banks (groupings) of machines that play toward a common goal or bonus. Once one of the linked machines hits a bonus round, all the machines go into the bonus round, giving players a reason to root for and interact with each other.

Whether it’s Madden 16 or Candy Crush, one of the biggest selling points for video games is the ability to compete with others. There’s a sense of accomplishment in throwing the perfect spiral or posting your Candy Crush scores to Facebook. Even a table game involves a player competing against the dealer. A slot machine has none of that. Slot machines are run by a random number generator (RNG) based on thousands of lines of code. It’s completely random and there is nothing you can do to influence the outcome (We’re ignoring video poker here, where skill is involved.). That may start to come to an end soon, as Nevada recently passed legislation that could lead to the introduction of skill-based games. Skill-based has been tried before, including a Ripley’s Believe it or Not machine, but creating a game that requires the type of skill that your average Play Station game requires will be difficult. You’ll risk losing the traditional slot machine crowd, while possibly failing to attract the next generation of slots players.

The themes and the mechanics of the game have changed, but the end-goal hasn’t: insert money, push button, hope for the best, lather, rinse, repeat. Players don’t even have a choice of games. Don’t like the games that are open? Too bad. Either go to another casino or wait until somebody is done. The manufacturers need to do a better job of offering choice.

They almost pulled it off a few years ago, with the introduction of server-based gaming. Casino employees can see what is going on at machines remotely, but if they want to make changes to the machine’s payback or the type of machine, they have to go down to the floor and open it up. Server-based gaming (SBG) would allow employees to control everything remotely. Want to give a game tougher odds on a Saturday night than they are midweek? No problem. Want to give the current player a special offer? You could do that. But there were benefits for the players, also. The machine itself would just be a box. Software internally would control which game is played, and customers would be able to choose from a “table of contents” of games, meaning that if they didn’t like the game the previous player had chosen, they could choose a new one. No more looking all over for that Star Wars slot machine.

Demographics don’t favor slot machines. Younger players don’t want to sit in front of a machine and push a button, if they are gambling at all. It’s likely that they’ll never be slot players. Casinos are going to go bankrupt long-term, but their profit margins will eventually feel it.

*Denominations may be low, but that doesn’t mean bets are. The average bet on a penny slot machine is actually around $.75.

**From the presentation at the 15th Annual Conference on Gambling and Risk Taking, 2013

***From the LVCVA data. There is an argument to be made that the diversification of the city’s revenue base brought in people who otherwise would not have come. That’s true, but it gave visitors an alternative to high-margin gaming.