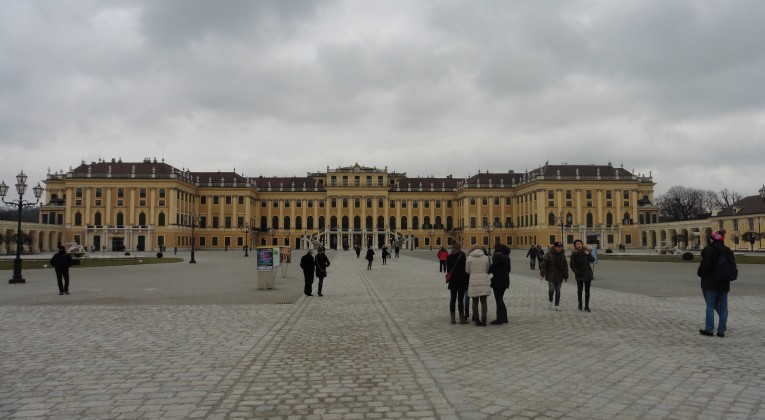 Vienna is a city with countless things to do and see. But if have limited time or you if you want to make sure you visit the highlights, here’s my pick of the top ten things to do in Vienna.

Once the summer home of the Habsburgs, Schonbrunn Palace is a must see when you visit Vienna. To get the most of your visit plan to spend a half or entire day touring the palace and adjacent gardens. UNESCO added Schonbrunn Palace to their world heritage list in 1996.

You’ll get a bird’s eye view of Vienna from the top of the ferris wheel (Wiener Riesenrad) in the Wurstelprater amusement park. Wurstelprater is open everyday and admission into the park is free.  However, rides are not free and priced individually.

Freshly cooked frankfurters and sausages are sold on street cards throughout Vienna.  Not only are they filling, but they’re inexpensive.  You can buy a foot long sausage in a roll for less than 4 euros.

Known as the City of Music, Vienna is home to one of the finest and busiest opera houses in the world, the Vienna State Opera.  Guided tours of the opera house are available and conducted in eight languages including English, German, and Italian.

Opera lovers (or those who want to try an opera without paying high ticket prices) can take advantage of standing room tickets sold on the day of performance from 3 euros.

No visit to Vienna is complete without sampling a piece of sacher torte or two.  Created by Franz Sacher in 1832 for Prince Wenzel von Metternich, no other cake in history has been the center of such controversy.  After a lengthly lawsuit over the name and exact recipe, the rights to use the name, “The Original Sachertorte” were awarded to the Hotel Sacher.

You can visit Mozart’s former Viennese residence, now converted to a museum to honor the composer, Mozarthaus Vienna.  Exhibits include his Mozarthaus is open daily and guided tours are available.

Lovers of sweets would be amiss without stopping by Demel for a little treat.  Demel’s has been the official supplier chocolate and confectionary to the Austrian court since 1786.This confectionary store is home to decadent sugary works of art. But hold tight to your pocketbook because these works of art don’t come cheap.

St. Stephen’s Cathedral is one of the largest and most visited sites in Vienna. The Gothic and Baroque architecture appeal to many and the church is still a working

You can tour the inside on your own for free.  Or take a paid tour.  Additional guided tours include climbing the two of the four towers and touring the catacombs where many famous royals are laid to rest including Holy Roman Emperor Frederick III.

The Spanish Riding School is home to the Lipizzaner horses.  The horses are trained in haute ecole (classical dressage) used during battles.

You can watch one of 70 performances of their training sequence throughout the year.

What sites are on your must see list for Vienna?