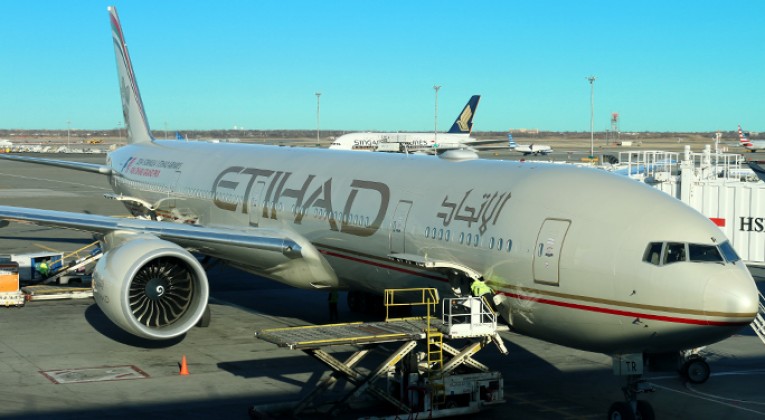 You are about to fly as a passenger seated in the economy class cabin for the first time aboard an airplane operated by Etihad Airways; but you are not certain as to what to expect — especially on a transatlantic flight.

Here are some tips which should help enhance your experience — even if only slightly:

1. Secure a Seat You Prefer

The aisles on a Boeing 777-300 aircraft operated by Etihad Airways can be quite narrow — meaning that the likelihood of you being bumped by a service cart or whacked with a bag by a fellow passenger is almost certain.

More often than not, the economy class cabin of the aircraft will be either very crowded or completely full; so while a window seat may offer you some solace and a modicum of privacy, keep in mind that every time you leave your seat will be a work in progress — especially if the seats in front of you are reclined due to the seat pitch.

Recommendation: Avoid sitting in a middle seat — especially in the center of the aircraft. You will be miserable. Decide whether you prefer easy access to the aisle or the perceived privacy of a window seat; and keep in mind that there are some seats in the very rear of the aircraft which are only two abreast instead of three abreast on the sides and four abreast in the center.

…and yes, you can even order a Kosher meal.

Recommendations: Order the seafood meal. Reconsider ordering the Asian Vegetarian meal, as one passenger never received it and instead was served the standard vegetarian meal along with the other passengers who did not order a special meal.

Despite being served two full meals, a sandwich and several snacks — such as caramel popcorn or crunchy apple slices — during a transatlantic flight, you may not feel satisfied from the amount of food served.

Also — if you decide to dine on a regular meal rather than order a special meal — keep in mind that of the three choices of meals, one is usually vegetarian and another is typically Indian in origin and preparation.

Between snacks and meals, Etihad Airways only offers juice, soda, water and one snack during the flight — usually excess snacks left over from the snack or meal service — unlike other airlines which usually offer a choice of snacks; so do not expect to satiate your hunger by simply visiting the galley.

Recommendations: Ensure that you have some edible items with you which are nutritious, filling and not perishable — nuts and dried fruits as two of many examples — just in case you are not fond of the food served to you during a flight. You should consider having edible items with you at all times anyway, just in case of an emergency or irregular operations which could occur at a time when no dining establishments or stores may be open for business.

Awaiting you at your seat will be a set of quality noise-cancelling headphones which will be available to you until prior to final descent, when they will be collected by members of the flight crew. You might be tempted to plug these headphones into your portable electronic device so that you may listen to your own music while drowning out the ambient noise in the cabin — only to find that there are two prongs at the end of the cord; while your device will only accept one prong.

You can plug one of the prongs into the device; but then you will only hear one channel while the other remains silent.

Recommendation: Bring a cheap adapter with you in order to fully enjoy the experience of listening to those headphones during your flight — which will last at least ten hours if you are traveling between the United States and Abu Dhabi. You might already have one in your possession which came with the earbuds that you acquired from a flight with a different airline.

While it will still not feel like an actual upgrade to a different class of service, these four simple tips will allow you to better experience your transatlantic flight operated by Etihad Airways.