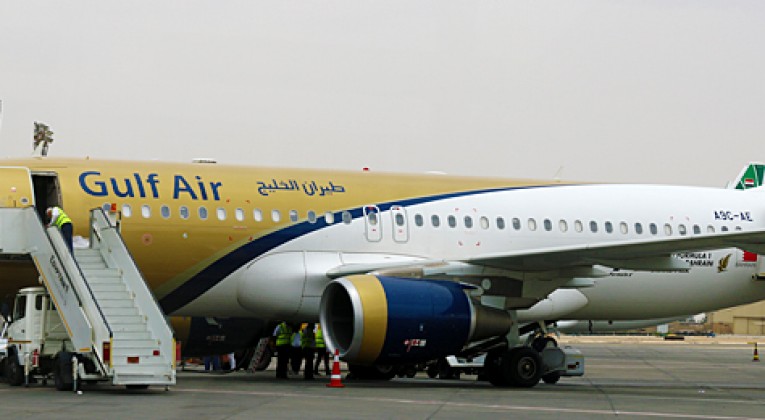 The short flight of approximately one hour from Abu Dhabi International Airport to Bahrain was not going to be anywhere near full of passengers, which I thought was nice as I sat there at the nondescript gate area — although I did detect the faint smell of stale cigarette smoke from the main terminal, which was mildly uncomfortable for me.

Gulf Air — the official national flag carrier of the Kingdom of Bahrain — was the airline which operated the Airbus A320-200 aircraft for the flight; and it would be my first time flying as a passenger on this particular airline. I have not heard much about this airline — other than when it was nominated for Freddie Awards — and I jokingly refer to it as the fourth of the three Gulf carriers.

The airplane arrived at the gate late; but that was no problem: with as few passengers as there were, everyone boarded at once — and I was one of the first to step aboard the airplane.

The aircraft was nice and clean, with the colors in muted tones. I arrived at my seat.

Unlike the seat on my first flight as a passenger on an airplane operated by Etihad Airways, there were few features to this seat.

There was an in-flight entertainment system with an adjustable touch screen, a retractable coat hanger, and a tray table equipped on the rear of the seat in front of me…

…and also unlike with Etihad Airways, the tray table was sturdier and smoother because it was not split in half and folded.

Leg room was significantly more ample than in the seats of Etihad Airways; and the aisle was wider. I did not feel as cramped as I did as a passenger on aircraft operated by Etihad Airways.

You can better see the seat pitch in the photograph shown above, which shows the row of seats across the aisle from the seat to which I was assigned.

Have you ever seen an air sickness bag which wished you well?

…but considering that there are usually few options of using in-flight entertainment systems on airplanes operating on domestic flights within the United States without having to pay extra in the economy class cabin, the options here were certainly satisfactory.

During the short flight, the flight attendants served a sandwich with a cup of orange juice; and if you like chicken salad — which I do not — then you were in luck. 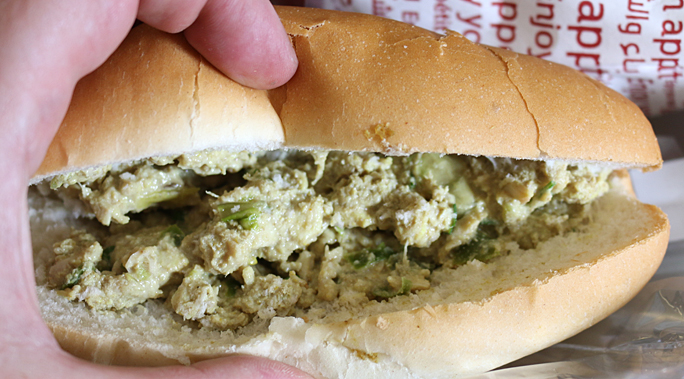 Fortunately, there was a vegetarian option available…

…which comprised mostly of cucumber and lettuce with some tomato.

I enjoyed the vegetarian option much better. The chicken salad sandwich was left uneaten by me.

The airplane landed in Bahrain on time.

You can order from a variety of special dietary meal options from Gulf Air; but unfortunately, seafood is not one of them — unlike by Etihad Airways. All food served aboard aircraft operated by Gulf Air is halal.

My first flight aboard an airplane operated by Gulf Air was uneventful — and that is a good thing. The interior of the airplane was clean; it was nice that food was served by nice flight attendants during the short flight; and although sparse, there were some in-flight entertainment options — enough to keep a passenger busy for an hour.

Clean airplane interior
Ample leg room
Complimentary sandwiches were served
Nice flight attendants who offered good service
Flight landed at destination on time
Some basic options for in-flight entertainment
The aircraft was not full of passengers
Reasonable airfare at $288.40 round-trip, including all taxes and fees

All in all, the flight was a pleasant and relaxing experience.